Detectives believe the truck is a 2019 to 2022 Ram 1500 and has damage on the right side of the truck. Police say the suspect was driving it when they opened fire on January 19 near the intersection of Highway 290 and William Cannon.

AUSTIN, Texas - Austin police are searching for a pick-up truck connected to a road rage shooting in southwest Austin. Detectives believe the truck is a 2019 to 2022 white Dodge Ram 1500.

The vehicle has dark tint on the back windows and possibly a bed cover. Police say the truck has damage along the right side of the truck.

Police say the suspect was driving the truck when they opened fire at around 8:10 p.m. on January 19 near the intersection of Highway 290 in the 6400 block of William Cannon.

A victim told police the suspect was driving erratically and cut them off as they traveled west on Highway 290, before turning right on William Cannon from the turn lane. 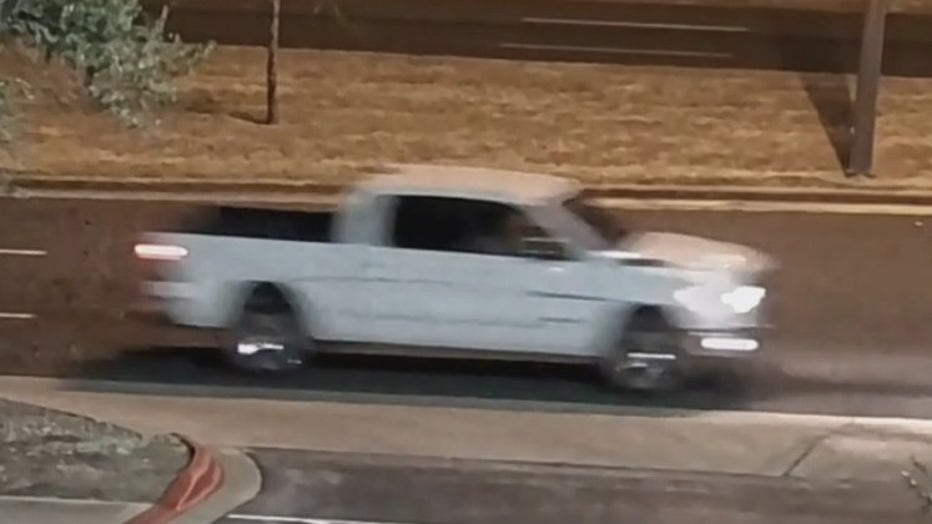 Photo provided by Austin Police Department of the pick-up truck detectives are looking for in connection to a January 19 road rage shooting that left two people injured.

The victim said as they made their turn, the suspect also turned right in their vehicle from a westbound lane and collided with the driver's side of the victim's car. The driver of the car then produced a handgun and fired multiple rounds into the victim's vehicle. The vehicle had six bullet holes and two people were hit with at least one shot.

Anyone with information about this incident such as customers who fled, or other violent crime is asked to call the APD Aggravated Assault Unit at (512) 974-4463, Crime Stoppers at 512-472-TIPS or use the new Crime Stoppers App. You can also submit tips by downloading APD’s mobile app, Austin PD, for free on iPhone and Android. Crime Stoppers is offering up to a $1,000 reward for information that leads to an arrest.

Police are investigating a possible road rage shooting that happened at around 8:15 p.m. on January 19 near the intersection of Highway 290 and William Cannon.