The Indiana Toll Road was shut down after a UPS semi-truck went over a bridge at the Calumet River Friday morning in northwest Indiana.

LAKE COUNTY, Ind. - The Indiana Toll Road is shut down to traffic after a UPS semi-truck went over a bridge at the Calumet River Friday morning in northwest Indiana.

Police say the eastbound lanes reopened around noon and engineers were on site conducting bridge inspection. Westbound I-90 has been closed between Cline Avenue/Exit 10 and Calumet Avenue since the fiery crash happened early this morning around 2 a.m. When it reopens later today, it will be restricted to one lane, officials say.

Reports say the truck went over the bridge at the 6.5 mile marker and caught fire. Video shows the truck dangling, stuck between the westbound and eastbound lanes.

Earlier this morning state police said the whole clean up effort could take upwards of 6 hours. A towing company used a crane to retrieve the portion of the truck wedged between the lanes.

The eastbound lanes on I-90 are back open this morning after a UPS truck crashed and ended up dangling from a bridge in Hammond, Indiana. Westbound lanes are still closed to traffic.

When responding officers got to the scene they thought the driver was in the river below because the cab of the truck was submerged. However, the UPS driver was able to climb out of the cab onto a concrete pillar, where he was rescued.

Police said he was not seriously hurt, but he was taken to an area hospital where he was treated for minor injuries and hypothermia.

State police identified the driver as Marc Rupert, 32, from Lansing, Ill. Investigators say the driver was traveling westbound when the truck left the lane and struck the center median wall. The truck went over the wall, partially falling into the Calumet River and catching fire.

The exact cause of this crash remains under investigation by police. 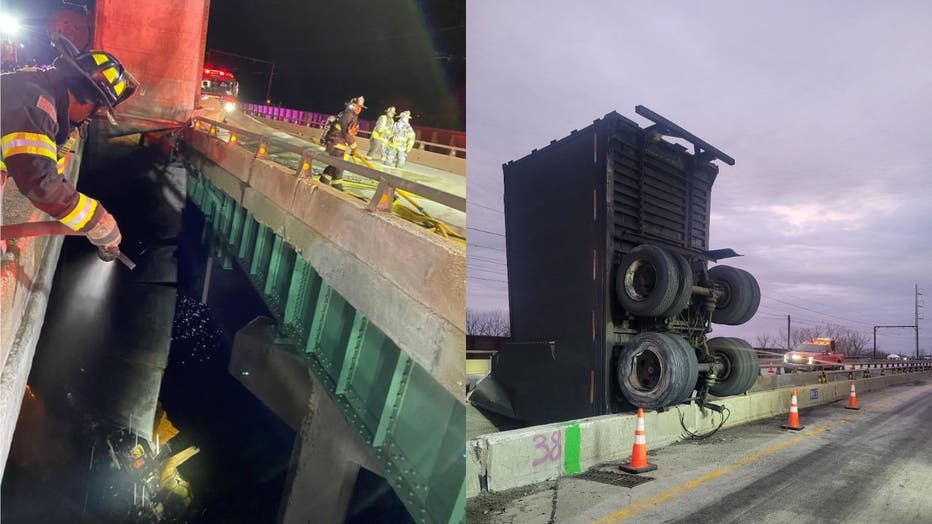 "We are thankful our driver is safe and that no other vehicles were involved. We are working with responding authorities on this continuing investigation," UPS told FOX 32.

Police confirm no other vehicles were involved in the crash. UPS says the driver was not cited, and their investigation is also ongoing.