President Biden outlined his immediate and future spending plans for his "Build Back Better" agenda following budget approval from the Senate.

Later on Wednesday, President Joe Biden outlined his immediate agenda for the newly-approved budget resolution which will bolster his administration’s Build Back Better plan.

"It’s not a short-term stimulus. It’s a long-term investment in American families," he said.

Senators were back at work Sunday aiming toward eventual passage of a $1 trillion bipartisan infrastructure package. Ohio Sen. Rob Portman called the package a genuine compromise and stated it was good for the country.

"Family budgets remain tight and paychecks don’t go as far as they need to. That has been the reality of millions of households all across America for too long. That’s why I want to talk today about what we’re going to do to try to ease the burden on families right now. And what we need to do to help them succeed over the longer term," Biden said.

Biden went on to outline how his administration will crack down on shipping disruptions due in part to the pandemic. The administration plans to bring together port operators, shipping lines, labor unions, trucking companies, railroads and others to speed up the ports’ operations.

"Right now, our experts believe, the major independent forecasters agree as well, that these bottlenecks and price spikes will reduce as our economy continues to heal," Biden added.

Biden also mentioned that his administration will "crack down on what some major players are doing in the economy that are keeping prices higher than they need be." 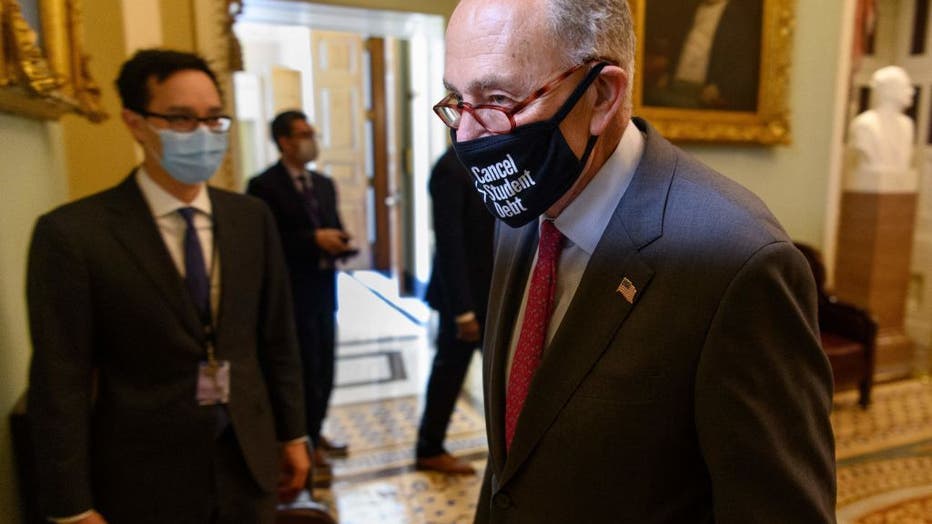 U.S. Senate Democratic Majority Leader Chuck Schumer departs after the infrastructure vote at the US Capitol in Washington, D.C, on Aug. 10, 2021. (Photo by MANDEL NGAN/AFP via Getty Images)

"When big agricultural operations consolidate, they put a squeeze on small and family farms, making them pay more for seed, paying them less for what they produce, and raising prices on what you pay for your groceries at the grocery stores," the president said.

Biden said his plans will open up agricultural competition and will give Americans more food options at lower prices.

"One key thing about the infrastructure bill that just passed the Senate is there are no gas tax increases. I made that absolutely clear that I would not raise gas taxes and I’m glad everyone in the Senate seemed to agree with that," Biden continued.

"I want to make sure that nothing stands in the way of oil price declines leading to lower prices for consumers," Biden said. 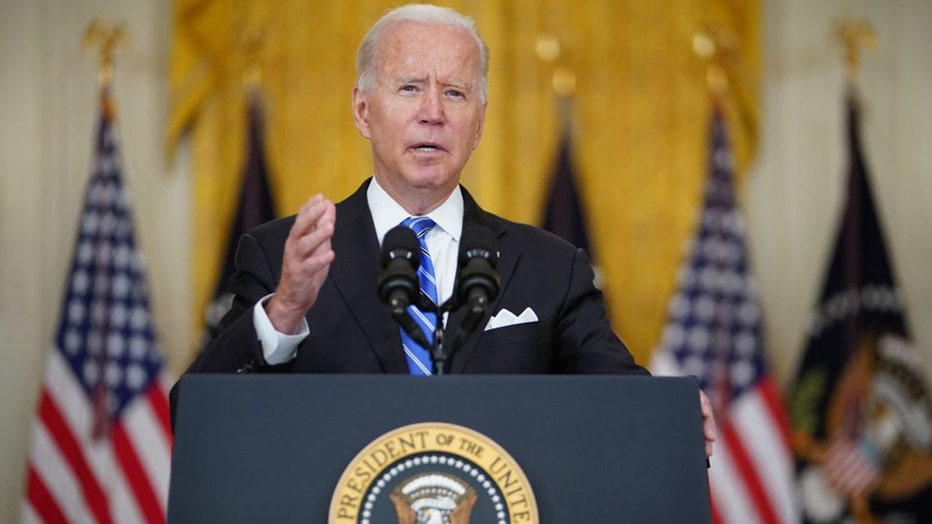 FILE - US President Joe Biden speaks on his Build Back Better economic agenda, in the East Room of the White House in Washington, DC, on Aug. 11, 2021.

The budget blueprint envisions creating new programs including tuition-free pre-kindergarten and community college, paid family leave and a Civilian Climate Corps whose workers would tackle environmental projects. Millions of immigrants in the U.S. illegally would have a new chance for citizenship, and there would be financial incentives for states to adopt more labor-friendly laws.

Medicare would add dental, hearing and vision benefits, and tax credits and grants would prod utilities and industries to embrace clean energy.

"Combined, these policy proposals, and others put forward by the President, will help ensure that families can meet costs and share in a broad prosperity," according to a White House statement.

The president also touted that slowed inflation is a sign that his administration’s American Rescue Plan "is working."

"Jobs are up and monthly price increases have come down. Economic growth is up, the fastest in 40 years and unemployment is coming down. I would argue that our Biden economic plan is working. Historic investments are on the way as well. This isn’t accidental. It’s a result of our strategy to get shots in arms, grow the economy from the bottom up and the middle out. And it’s the result of the American Rescue Plan and everything else that we’ve done. And it’s the result of the grit and determination and really hard work of the American people," Biden said.

Lawmakers approved Democrats’ budget framework on a party-line 50-49 vote just before 4 a.m. ET in a crucial step for Biden and a party set on training the government’s fiscal might on assisting families, creating jobs and fighting climate change. Higher taxes on the wealthy and corporations would pay for much of it.

Passage came despite hours-long debate on the floor and an avalanche of Republican amendments, underscoring the potential fight to come on the spending bill.

House leaders announced their chamber will return from summer recess in two weeks to vote on the fiscal framework, which contemplates disbursing the $3.5 trillion over the next decade.

Passage of the budget resolution by both the Senate and the House would unlock what’s known as the reconciliation process, which is a way for Congress to enact legislation on taxes, spending and the debt limit with only a majority vote in the Senate of 51 votes. In doing so, they can avoid the threat of a Republican filibuster hurdle — which requires 60 votes to overcome.

Democrats control the House with just three votes to spare, while the evenly divided Senate is theirs only due to Vice President Kamala Harris' tie-breaking vote. Solid Republican opposition seems guaranteed.

"It will also, I hope, restore the faith of the American people in the belief that we can have a government that works for all of us, and not just the few," he said.

Republicans argued that Democrats' proposals would waste money, raise economy-wounding taxes, fuel inflation and codify far-left dictates that would harm Americans. They were happy to use Sanders, a self-avowed democratic socialist, to try tarring all Democrats backing the measure.

If Biden and Senate Democrats want to "outsource domestic policy to Chairman Sanders" with a "historically reckless taxing and spending spree," Republicans lack the votes to stop them, conceded Senate Minority Leader Mitch McConnell, R-Ky. "But we will debate. We will vote."

The Senate turned to the budget resolution after it approved another major item on Biden’s legislative agenda, a compromise $1 trillion bundle of transportation, water, broadband and other infrastructure projects for states coast to coast. The bill now goes to the House.

The measure passed 69-30 with McConnell among the 19 Republicans backing it.

In passing the infrastructure bill, a sizable number of lawmakers showed they were willing to set aside partisan pressures for now. They are eager to send billions to their states for rebuilding roads, broadband internet, water pipes and the public works systems that underpin much of American life.

"This infrastructure bill is not the perfect bill," said Sen. Lisa Murkowski, R-Alaska, one of the negotiators. She said the senators kept at it, believing, "It’s better to get some of what our constituents want rather than none of it."

Infrastructure was once a mainstay of lawmaking, but a weeks-long period of negotiating to strike a compromise showed how hard it has become for Congress to tackle routine legislating, even on shared priorities.

"Today, we proved that democracy can still work," Biden declared at the White House.

The Associated Press Catherine Park contributed to this report. It was reported from Cincinnati.