OAKLAND, Calif. - Protesters in Oakland came out in force to decry the shooting of Jacob Blake in Kenosha, Wis. and while the demonstration started off peacefully, police say later in the night some people began breaking windows and setting fires to cars, businesses and the outdoor steps of the Alameda County Superior Courthouse.

Police said a crowd gathered at Frank Ogawa Plaza, but within an hour had swelled to as many as 600 people. After midnight, Oakland police said that people took part in what they described as "violent & destructive protests."

Damage included dozens of windows from 21 businesses being smashed. In addition,many windows of a 100% affordable residential housing complex on Grand Avenue were damaged, police said.

Authorities reported that some protesters threw objects at officers, but none was hurt. There were no other injuries reported.

Several arrests were made. However, police said none of those arrested were Oakland residents.

Hours earlier, authorities reported that demonstrators briefly overtook Interstate 580, but then exited the freeway from the Grand Avenue off-ramp.

In addition, they reported illegal fireworks were being set off. As the night wore on, things seemed to escalate. Shortly before 10 p.m., police said the "agitators" within the crowd had attempted to set a business on fire at 8th and Broadway streets, but that officers and the fire department had intervened in time to prevent further damage. 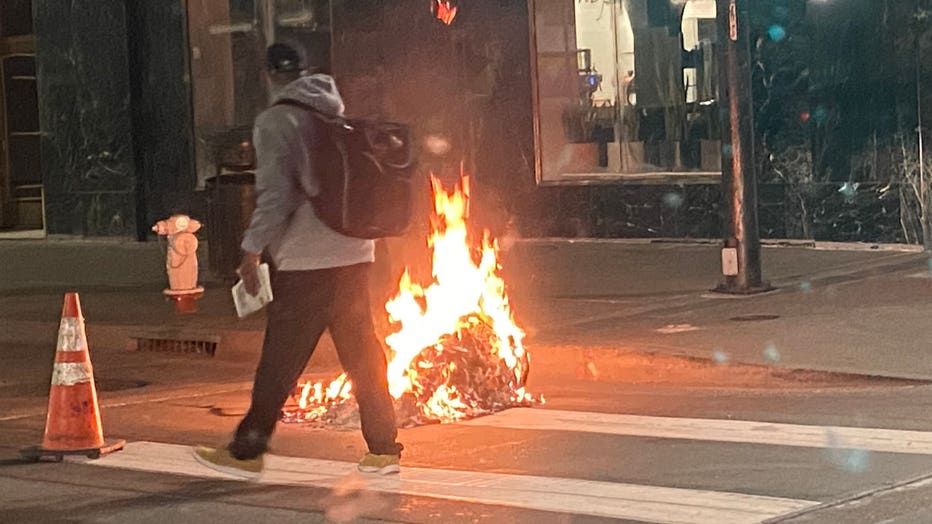 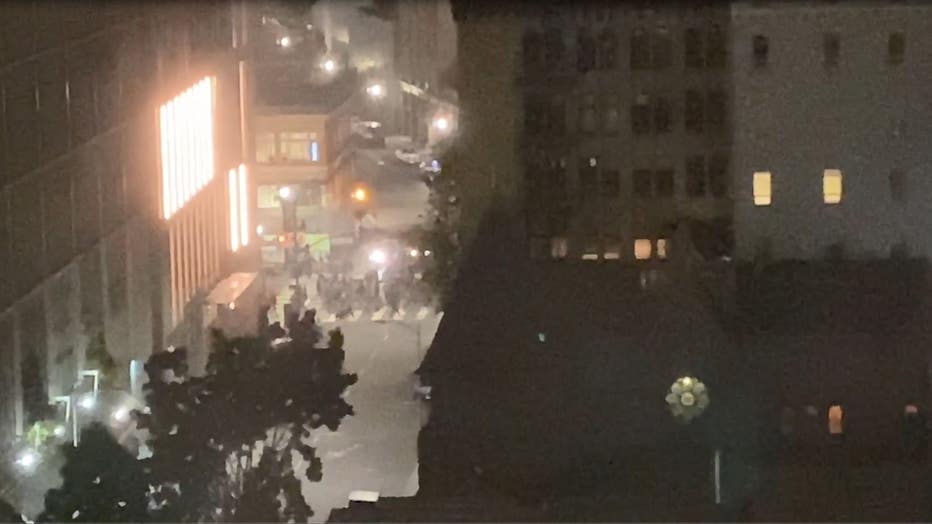 Demonstrators marching at Broadway and 17th in Oakland.

By 10 p.m., police said there were broken windows and garbage cans set on fire along Broadway.

Several businesses, including Luka's Tap Room & Lounge on Broadway at W. Grand Ave., had just removed plywood from their windows following the unrest from the George Floyd protests back in June.

A nearby Target store had recently reopened after being ransacked during those same demonstrations.

In Wednesday's destruction, Whole Foods Market, Bank of the West, and Modern Times Brewery were also targeted. Whole Foods was open on Thursday.

"The intentions of the protesters were not peaceful but deliberate; through their words and actions they demonstrated their focused and targeted intentions to destroy and damage our already vulnerable business community," OPD spokesperson Officer Johnna Watson said in a statement issued Thursday.

Watson added that some residents attempted to deter protesters in their neighborhoods, but were met with "threats of violence and destruction."

The 19th St. BART station issued a tweet just before 10 p.m. to say the station was closed due to a civil disturbance. BART has ended its service at 9 p.m. since the pandemic began.

Sgt. Ray Kelly, a spokesman for the Alameda County Sheriff's
Office, said damage to the Rene C. Davidson Courthouse at 1225 Fallon St., including from a small fire, will cost $200,000 to repair. The cost of repairs after vandalism at the courthouse several weeks ago also amounted to $200,000, Kelly said.

The protests in Oakland were sparked after an officer, who has since been identified, shot Blake seven times in the back on Sunday in Kenosha.

Blake, who is Black, may be permanently paralyzed from the shooting, but was listed in stable condition at the hospital.

Oakland police had indicated they supported demonstrators' rights and reached out via Twitter to allow organizers to facilitate a safe space for the demonstrations.

A policewoman's voice could be clearly heard telling people to step back from the barricades and stop vandalizing objects. From video at the scene, it appears that Oakland police did not resort to tear gas.

Earlier this summer, a federal judge granted an injunction against OPD in how they conduct crowd control policy. As part of the ruling, tear gas, flash bang grenades and other less-than lethal projectiles like rubber bullets are effectively banned, with exceptions for cases where police need to prevent injury or substantial property damage.

OPD, clad in riot gear, had controversially deployed tear gas on a group of Floyd protesters near police headquarters back on June 1. The group was an offshoot of an earlier youth organized protest that gathered and marched from Oakland Technical High School.

The department said some in the group were throwing rocks and bottles at officers and preparing Molotov cocktails. They used the gas just ahead of an imposed curfew. It was not clear if the youth had evacuated the area in time, although OPD maintained they did.

It was not clear who the organizer or organizers were for Wednesday evening's events. On Thursday, OPD's Watson said the event was promoted by a group called #yayarearevolution.

A flashpoint in Kenosha was reached Tuesday, when during a third night of unrest, a 17-year-old boy seen toting a semi-automatic rifle from multiple vantage points on social media videos, shot and killed two demonstrators and injured a third.

Kyle Rittenhouse of Antioch, Illinois was taken into custody Wednesday on suspicion of first-degree intentional homicide.