WASHINGTON (AP) - The Trump supporters who stormed the U.S. Capitol in January created a trove of self-incriminating evidence, thoroughly documenting their actions and words in videos and social media posts. Now some of the camera-toting people in the crowd are claiming they were only there to record history as journalists, not to join a deadly insurrection.

It's unlikely that any of the self-proclaimed journalists can mount a viable defense on the First Amendment's free speech grounds, experts say. They face long odds if video captured them acting more like rioters than impartial observers. But as the internet has broadened and blurred the definition of a journalist, some appear intent on trying.

At least eight defendants charged in the Jan. 6 riot have identified themselves as a journalist or a documentary filmmaker, including three people arrested this month, according to an Associated Press review of court records in nearly 400 federal cases.

RELATED: US Capitol rioter charged with 8 offenses jailed pre-trial after trying to flee to Switzerland

The insurrection led to the deaths of five people, including a police officer, and there were hundreds of injuries. Some rioters manhandled and menaced the reporters and photographers who are credentialed to cover Congress and were trying to cover the mayhem that day. A group of AP journalists had photographic equipment stolen and destroyed outside the building.

One defendant, Shawn Witzemann, told authorities he was inside the Capitol during the riot as part of his work in livestreaming video at protests and has since argued that he was there as a journalist. That explanation did not sway the FBI. The plumber from Farmington, New Mexico, is charged with joining in demonstrating in the Capitol while Congress was certifying Joe Biden’s electoral victory over Donald Trump.

"I seek truth. I speak to sources. I document. I provide commentary. It’s everything that a journalist is," Witzemann told a New Mexico television station after his arrest April 6. He did not respond to a social media message and email from the AP.

Witzemann's nightly news show is titled the "Armenian Council for Truth in Journalism" — satirically, his attorney says. On its YouTube page, which has just over 300 subscribers, the show says it "delivers irreverent and thought provoking commentary and analysis, on an eclectic range of subjects." 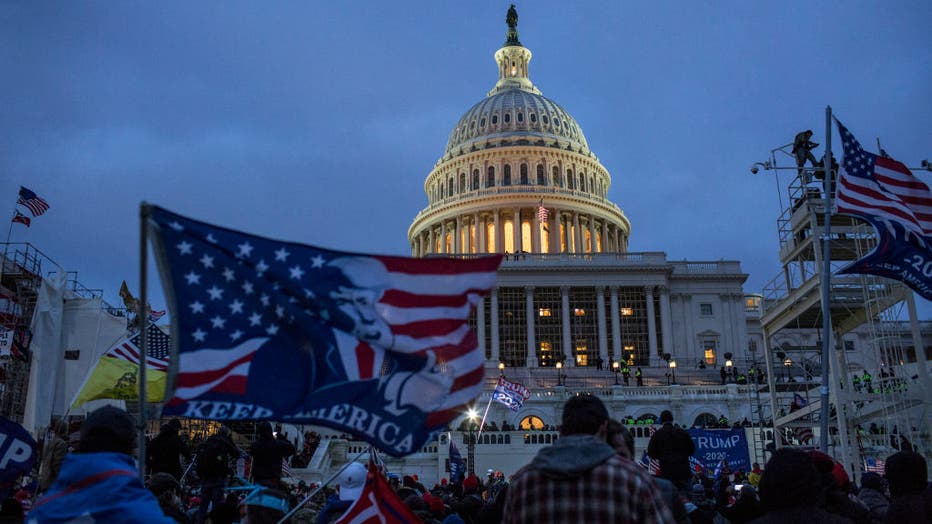 But while the internet has given more people a platform to use their voice, the definition of a "journalist" is not that broad when put into practice in court, said Lucy Dalglish, dean of the University of Maryland’s Philip Merrill College of Journalism, who used to practice media law as an attorney.

She said it is an easy case to make that Capitol riot defendants were not journalists because reporters and photographers must have credentials to work there. She said any defendant captured on video encouraging rioters cannot credibly claim to be a journalist.

"You are, at that point, an activist with a cellphone, and there were a lot of activists with copyrighted videos who sold them to news organizations," Dalglish said. "That doesn’t make them journalists."

Even credentialed reporters and news photographers are not immune from prosecution if they break a law on the job, said Jane Kirtley, who teaches media ethics and law at the University of Minnesota.

Samuel Montoya, an Infowars video editor, was arrested Tuesday in Texas on charges including impeding passage through the Capitol grounds. Montoya spoke on an Infowars show about witnessing a police officer shoot and kill a woman inside the Capitol.

Montoya also recorded and narrated a video while walking through the building, occasionally referring to himself as a journalist while wearing a red "Make America Great Again" hat.

"We’re gonna do whatever it takes to MAGA," he said, according to the FBI.

Montoya told a judge on Wednesday that he works for Infowars and mentioned that Jones also was in Washington on Jan. 6. Jones has not been charged in the riot, but Montoya asked if returning to work or contacting his boss could violate his pretrial release conditions.

"I certainly understand what you’re asking because this was also a news event and you work in the news or information business, but this is a line that you’re going to have to be careful of on your own," U.S. District Judge Susan Hightower said.

Far-right internet troll Tim "Baked Alaska" Gionet, who was arrested less than two weeks after the riot, streamed live video that showed himself inside the Capitol and encouraging other protesters to stay. Investigators say Gionet also profanely called an officer an "oathbreaker" and chanted, "Whose house? Our house!"

Prosecutors dispute that Gionet is a journalist. His lawyer said the former BuzzFeed employee only went to Washington to film what happened.

"That is what he does. January 6th was no different," defense attorney Zachary Thornley wrote in a court filing.

Another defendant, John Earle Sullivan, leads the protest organizing group "Insurgence USA" and identifies himself as an activist and journalist who films protests, the FBI said. Defense attorney Steven Kiersh challenged court-ordered restrictions on Sullivan's use of the internet and social media.

Sullivan "is legitimately self-employed as a documentarian and it is oppressive to require that he not be allowed to continue his primary area of employment for an extended period of time," Kiersh wrote in court papers, attaching receipts for work Sullivan has done for CNN and other news outlets.

Sullivan is accused of saying, "Let’s burn this (expletive) down," after the mob breached a security barrier, entering the Capitol through a broken window and telling officers inside to back down.

Witzemann’s lawyer argued that prohibiting him from traveling outside New Mexico would violate his First Amendment rights as a freelance journalist. The charges against Witzemann include violent entry and disorderly conduct on Capitol grounds.

After his arrest, Witzemann told KOB-TV that others had breached barricades outside the Capitol before he arrived.

"My only goal was to get right up to the front of the action, so to speak, to film it," he said.

Other defendants identifying as journalists have been tied to an extremist group or movement by federal authorities.

Nicholas DeCarlo told the Los Angeles Times that he and another alleged rioter, Nicholas Ochs, are journalists. But the FBI said Ochs and DeCarlo are self-identified Proud Boys and content producers for an online forum called "Murder the Media News."

Prosecutors say DeCarlo wrote "Murder The Media" on a door in the building. When authorities later searched DeCarlo's home, they found a framed photo of DeCarlo and Ochs posing in front of the door with a thumbs-up.