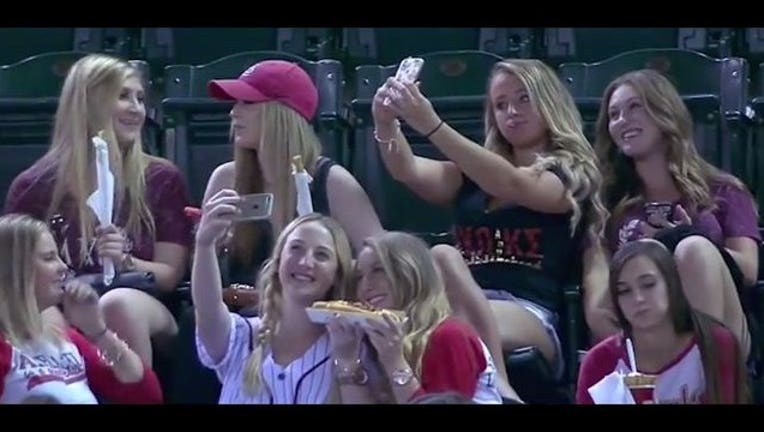 A screenshot of the MLB video shows the group in the stands at the Arizona Diamondbacks game taking selfies and using props like a hot dog and a churro. (Photo: MLB via TMZ)

FOX 11 - Despite all of the selfie-love, the sisters of Alpha Chi Omega at Arizona State University aren't really concerned about themselves. The girls who were the focus of a now-viral video from last Wednesday night's Arizona Diamondbacks game turned down an offer for free tickets to another D-backs game.

They have instead have asked the pro-baseball club and the television network that gave them their moment in the spotlight to donate the offered tickets to a charity that helps domestic violence victims.

Here is their statement taken from the Alpha Chi Omega at ASU Facebook page.

"Alpha Chi Omega at Arizona State University would like to thank the Arizona Diamondbacks and Fox Sports for reaching out to the chapter after last night’s game and subsequent media frenzy. We appreciate their generous offer of tickets to tonight’s game. However, instead of chapter members attending the game, we have asked the Diamondbacks and Fox Sports to provide tickets to a future game for families at A New Leaf, a local non-profit that helps support victims of domestic violence.

Today, October 1, marks the beginning of Domestic Violence Awareness Month. If everyone who viewed this statement took the time to make a donation in recognition of domestic violence awareness, which is Alpha Chi Omega’s national philanthropy, we would be so grateful! We are happy to have the opportunity to shed some positive light on such a sensitive subject. All proceeds will go directly to A New Leaf to help struggling Arizona families get back on their feet by providing housing, food, childcare and more. You can donate using the link below. We appreciate your support!

The MLB announcers during the Arizona Diamondbacks-Colorado Rockies game on Wednesday were thoroughly entertained by a group of Arizona State sorority girls have a full-fledged selfie session in the stands.

A camera focused on a block of girls during the game, apparently in the Alpha Chi Omega sorority, all preoccupied with taking the perfect selfie.

Props like hot dogs and churros were involved as well as the classic duck face.

The camera keeps going back to them, and it's the same hilarious scene every time. Bob Brenly and Steve Berthiaume had a field day.

The girl squad didn't seem to mind. The sorority's Twitter account @asu_axo posted and retweeted about it.

As the old saying goes: "If a girl went to a baseball game and didn't take at least five selfies, did it even happen?"

Keep doing you, girls. Ain't no shame in the selfie game.