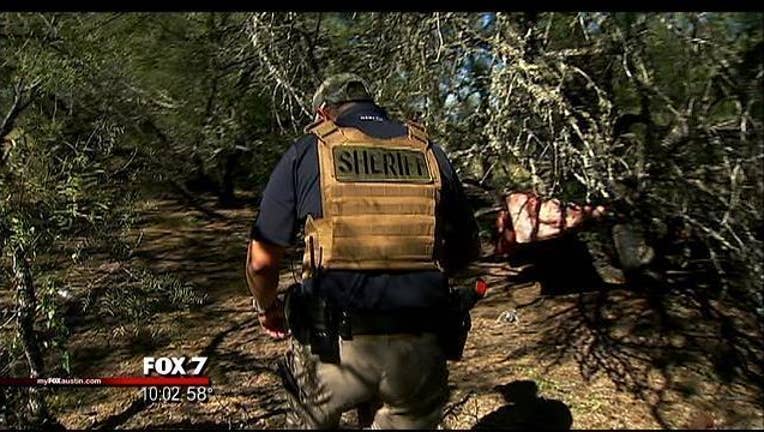 That's been the situation for local authorities in south Texas. A quarter of a million undocumented immigrants have been caught trying to cross the Texas border this year.

FOX7's Rudy Koski was in Brooks County. He went on patrol with one of the hardest hit sheriff's departments in south Texas and shows us how a new strategy is providing some much needed back up.

During the summer nearly 9 out of 10 emergency calls in Brooks County, according to deputies, involved wild chase with undocumented aliens. Recent dash cam video of bail outs and arrests show how the incidents continue to plague the small south Texas County. But the crisis is not quite as severe as it was according to Chief Deputy Benny Martinez.

"I think we've been through the hardest times," said Martinez.

In the heart of Brooks County on Hwy 281 is a border checkpoint. So far this year, more than 34,000 illegal immigrants have been caught there.

In October, smugglers tried to sneak through in this rental truck. Inside four people were hiding in a cardboard box and another man was found in a washing machine. To avoid the checkpoint, human smugglers known as coyotes, lead illegal immigrants into desolate ranch land. Some fall victim to the harsh conditions.

Since 2011, at least 332 sets of human remains have been found in Brooks County. But lately there have been fewer grim discoveries.

"We've been sitting on 55 for the year," said Martinez.

The arrival of new search and rescue teams seem to be making a difference. October 14 a special Border Patrol unit carried out a man near Encino. He injured his leg and called for help. Martinez hopes more will do the same.

"It happened when the state guard was here, the last mission they had, they just gave up."

In that September rescue, smugglers had left a woman behind and she was barely alive.

"This is what it's all about, search and rescue," said Martinez.

The extra manpower takes pressure off of road deputies like Eloy Galvan who spend much of the day sweeping areas used by smugglers and illegal aliens. Old abandoned buildings, despite the filthy conditions, can also be an oasis for the exhausted travelers.

"The cots were not here, so someone stayed here, for a couple of days and then went into the brush," said Galvan.

On each patrol Galvan looks for new tricks like the clothing we found in a plastic bag.

The youngest Galvan says he has found was a 13-year-old boy. The teen had escaped from a "stash-house." He paid smugglers $10,000 but was left behind because he was too slow.

"I have more sympathy for the kids, and the children, because I know for a fact right now as I'm driving there is a child out there starving, dehydrated, crying, and me as a father, it hurts me," said Galvan.

Saving a life is what pushes Galvan into dark places and deep into the brush.

"If they're dying of thirst or hunger, it's harder for us or border patrol to find them and by the time we do find them, it's a little too late, they die. The body I found was about 5 miles into a ranch," said Galvan.

To address the deaths, several rescue and recovery stations have been set up by the border patrol. Along with water, a message board with instructions in languages including Chinese- explain how pressing the red button will bring help.

Other oases are also being set up, and for one group it all starts with a Blue Barrel.

Inside the barrels are jugs of water. Nearly 40 have been set up in Brooks County by members of a human rights group. The effort is controversial but not illegal.

"I don't have a concern on them, sort of aiding and abetting, I think it's helping them get the elements they need at the time they need them," said Martinez.