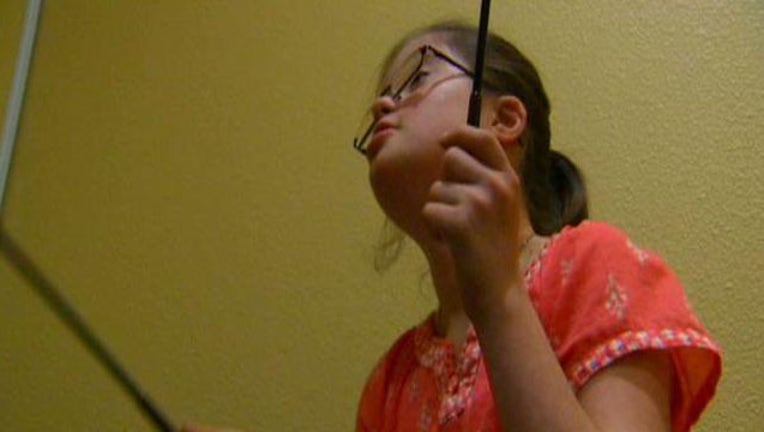 From Bob Dylan to The Beatles, musicians have been influencing the masses for decades. Now, music is changing lives in another way.

Peter Skidmore has been attending music therapy sessions to help him with a medical condition.

"Peter has a very rare metabolic disorder that affects one in every 40,000 children," said Melissa Skidmore, Peter's mother.

"He can't sit up by himself, he doesn't really have the greatest head control, he can't really use his hands the way a typical kid would," Melissa said.

Melissa recognized early on that even though her son will never have a normal childhood, when it comes to music, he doesn't miss a beat.

"He's always responded to music, from before he had his brain injury to after. It's been something he really enjoys and responds to a lot and it's something he can participate in," said Melissa.

Music therapy is used to help Peter ease muscle tension and focus on making a connection between his brain and his muscles.

Peter is one of about 100 clients that are treated at the Center for Music Therapy in Austin. When it opened 25 years ago, it was the only for-profit music therapy center in the world.

As more studies show music is an effective form of treatment for several medical conditions, many doctors are beginning to recommend it to their patients.

"No question in my mind it's quite beneficial," said Morledge.

Steve Ross has been working with therapists at the Center for Music Therapy for several months.

Treating Parkinson's disease is one of the most studied uses for music therapy.

"Those folks that are signed up with the music therapy tend to have a better gait, improved balance and I'm able to reduce some of their Parkinson's medications at times," said Morledge.

People diagnosed with Parkinson's often have trouble with quick or consecutive movement.

"Therapy works a lot of the tremors and the nervous ticks," said Ross.

Studies show many patients have been able to improve coordination by focusing on musical rhythyms.

Ross said after just one hour he sees a substantial improvement to his posture and maybe even more importantly his mood.

"It has made a significant difference to my day-to-day activities, my ability to function normally, be a dad," said Ross.

14-year-old Lili Salinas was born with Down Syndrome- a genetic chromosome disorder that can affect development of the brain. For Lili it means she sometimes has difficulty with articulation.

"Music is a great way to work on speech production. You take her favorite song, you print out the lyrics, you read through them and then singing them," said music therapist Emily Morris.

Back when Lili first started coming to the Center for Music Therapy, she wasn't fond of speaking into a microphone. Now, it's hard to get her to stop.

There are still many challenges facing music therapy centers today.

"What's frustrating to me, as a provider, is very few health insurances recognize it as a true therapy," said Morledge.

With new research about its effectiveness and hundreds of stories like Peter's, Steve's and Lili's, it may not be long before insurance companies have to face the music.