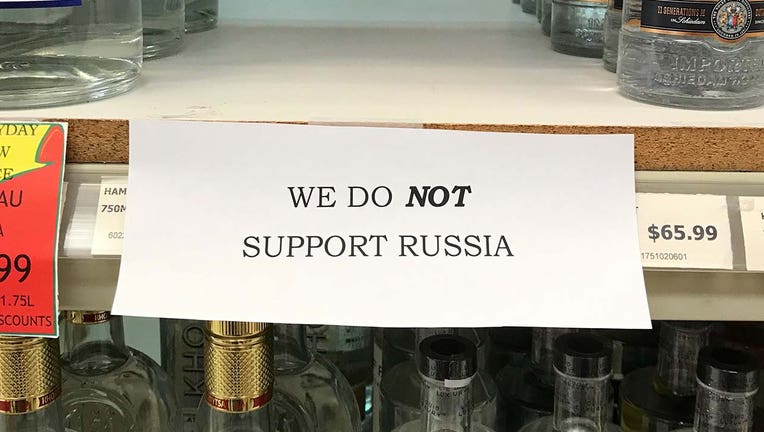 Empty spot where Russian vodka was once stocked at Jacob Liquor Exchange in Wichita, Kansas.

WICHITA, Kan. - One Kansas liquor store is standing in solidary with Ukraine after it took all Russian vodkas off its shelves Friday, and they hope to inspire others to take a similar stand.

After news broke on Russia’s full-scale invasion of Ukraine, Jacob Liquor Exchange located in Wichita, decided to pull the more than 100 bottles of Russian vodkas and keep them in storage in the event someone specifically asked for one of them, FOX 4 KC reported.

"This is obviously a small sanction but it could make ripples and we wanted to show that we are not supporting what’s going on," Jamie Stratton, Jacob Liquor Exchange partner and wine director, told FOX TV Stations. "I’m trying to stand with Ukraine by not standing behind Russian products."

"This vodka, in particular, I would urge people. This is Khor vodka from the Ukraine. If you want to buy some vodka, don’t buy Russian, buy Ukrainian," Stratton said.

Each Jacob Liquor store is independently owned and Stratton told FOX 4 his actions and opinions are his alone.

Russia's invasion of Ukraine has continued to intensify, with new explosions being heard in the capital of Kyiv in the last few moments. Officials fear the city could fall within days as the casualty count continues to rise.

As Russian troops bore down on Ukraine’s capital Friday, the United States and other global powers slapped ever-tougher sanctions on Russia as the invasion reverberated through the world’s economy and energy supplies, threatening to further hit ordinary households. U.N. officials said millions could flee Ukraine. Sports leagues moved to punish Russia and even the popular Eurovision song contest banned it from the May finals in Italy.

There were reports of hundreds of casualties from the warfare — including shelling that sliced through a Kyiv apartment building and pummeled bridges and schools — there also were growing signs that Russia may be seeking to overthrow Ukraine’s government. It would be his boldest effort yet to redraw the world map and revive Moscow’s Cold War-era influence.

NATO decided to send parts of the alliance's response force to help protect its member nations in the east for the first time. NATO didn’t say how many troops would be deployed but added it would involve land, sea and air power.

In the fog of war, it was unclear how much of Ukraine is still under Ukrainian control and how much or little Russian forces have seized. The Kremlin accepted Kyiv's offer to hold talks, but it appeared to be an effort to squeeze concessions out of embattled President Volodymyr Zelenskyy instead of a gesture toward a diplomatic solution.