Crowd sings 'God Save the Queen' outside Buckingham Palace

Hundreds of people flocked to Buckingham Palace on Thursday evening, September 8, after the Royal Family announced the death of Queen Elizabeth II. Footage taken by Tomas Petrus captures a crowd singing ‘God Save the Queen’ as it rained on Thursday night outside Buckingham Palace.

LONDON (AP) - Several sporting events in Britain were called off as a mark of respect following the death of Queen Elizabeth II at the age of 96 on Thursday.

Organizers of the BMW PGA Championship golf event reacted to the announcement of the queen’s death by immediately suspending play, with many players still out on the course at Wentworth. The course and practice facilities will be closed Friday.

The England and Wales Cricket Board said Friday’s play in the second test between England and South Africa at the Oval would not take place.

Horse racing meetings in Britain were suspended on Thursday night and Friday, with the governing body wanting to "remember her extraordinary life and contribution to our sport and our nation."

Domestic rugby matches in England and Scotland were called off on Thursday and games will not be played over the weekend, either.

Organizers of cycling's Tour of Britain declared the race over after canceling Friday's stage as well as two more over the weekend. Gonzalo Serrano, who led after Thursday's stage, was named the winner.

The Premier League paid its respects to the royal family, saying it was "deeply saddened" to hear of the queen's death. It didn't immediately say whether games would go ahead this weekend.

The English Football League, which runs the three divisions below the Premier League, called off its games that had been scheduled to be played Friday evening and said a decision would be made on Friday morning about weekend games after discussions with the British government and wider sport.

Manchester United's Europa League game against Real Sociedad did take place hours after the queen's death was announced. There was a minute’s silence before kickoff at Old Trafford, with both teams wearing black armbands and the flags at stadium lowered to half-staff as a sign of respect. 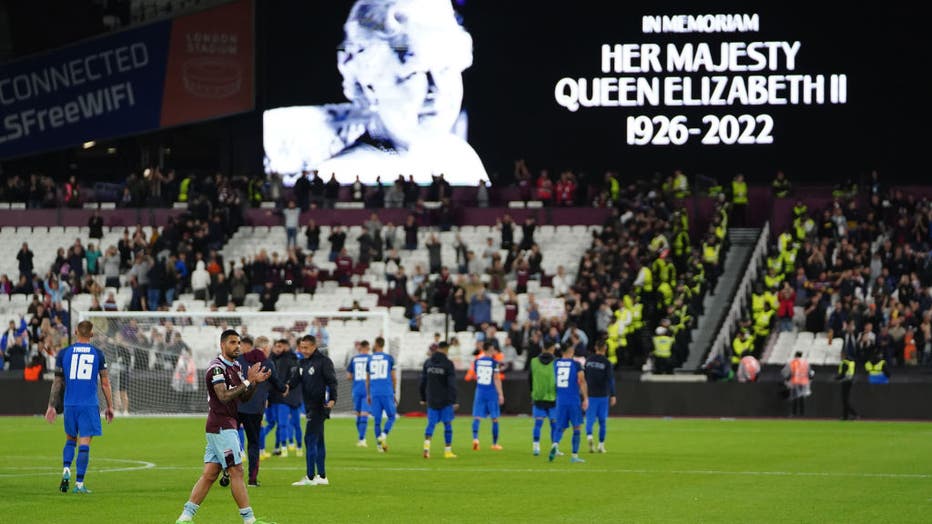 West Ham United's Emerson Palmieri applauds the fans after the final whistle as the big screen displays a message in memoriam following the announcement of the death of Queen Elizabeth II, after the UEFA Europa Conference League Group B match at the

There was no pre-match music and the digital advertising hoardings around the field were switched off.

There was a minute's silence in other European games involving British teams, such as Arsenal, West Ham and Hearts.

The U.S. Tennis Association announced there would be a moment of silence before the first U.S. Open women’s semifinal match Thursday night, between Ons Jabeur and Caroline Garcia, "to commemorate the passing of Queen Elizabeth II."

Brazil soccer great Pele tweeted about his admiration for the queen ever since meeting her in person in 1968 when she visited the Maracana in Rio de Janeiro.

"Her deeds have marked generations," Pele wrote. "This legacy will last forever."

The All England Club, home of the Wimbledon tennis tournament, said the queen undertook her duties "with great wisdom, dignity and charm for 70 years."

The queen was the royal patron of the Welsh Rugby Union, which thanked her for "years of service on this profoundly sad day."