Queen Elizabeth II invoked her late husband, Prince Philip, in a video message Monday to world leaders gathered for the U.N. COP26 climate-change summit in Scotland. The Queen spoke along with Charles, Prince of Wales at COP26.

LAS VEGAS (AP) - Water leaders in Arizona, Nevada and California signed an agreement Wednesday to voluntarily reduce their take from the Colorado River to help stave off mandatory cuts in the upcoming years.

The signing took place at the Colorado River Water Users Association annual meeting in Las Vegas, amid urgency to negotiate new rules for managing the dwindling river — which serves 40 million people — beyond 2026, when current guidelines and an overlapping drought plan expire.

The newest agreement, known as the "500+ Plan," requires the states to cut 500,000 acre-feet in 2022 and 2023, or enough to serve 1 million to 1.5 million households annually, depending on water usage and conservation in the area.

It also requires financial investment from the states — $40 million from Arizona, and $20 million each from Nevada, California and the Central Arizona Project, which operates a canal system that delivers Colorado River water in Arizona. The federal government would match the funding, for a total of $200 million.

The money would fund water efficiency projects and programs to reduce usage throughout Arizona, Nevada and California, which are in the river's lower basin.

The Interior Department joined the states and other water users in making the announcement. 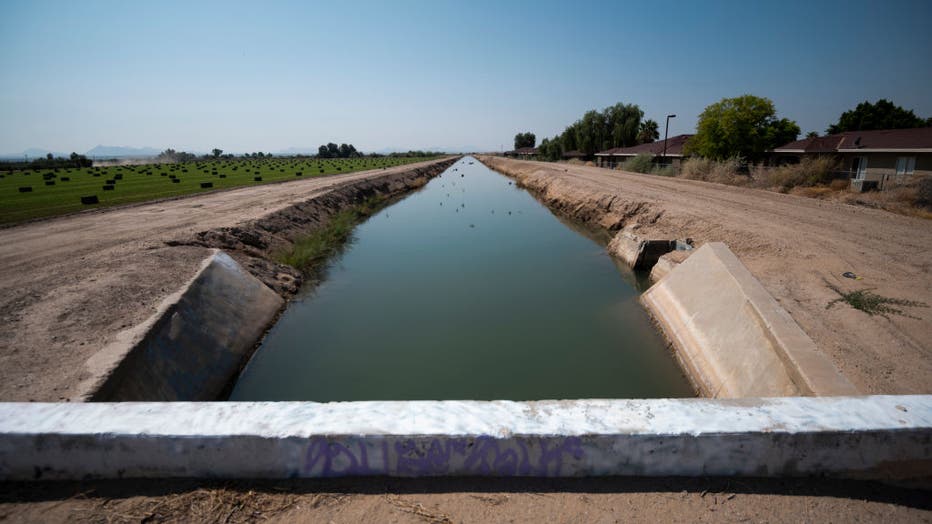 One of many irrigation canals provides water to farm land in and around Blythe, Calif., on Tuesday, Aug. 24, 2021. (Photo by Bill Clark/CQ-Roll Call, Inc via Getty Images)

The stop-gap measure upstaged what water managers had hoped to be the focus of the Las Vegas gathering — the start of negotiations for the next plan. That will have to wait, U.S. Bureau of Reclamation Commissioner Camille Touton told attendees over video conference.

"We need to focus on near-term operational challenges," she said.

Exactly how much water each state will contribute under the 500+ Plan is still being negotiated. The three states' share of Colorado River water is delivered through the country's largest reservoir, Lake Mead. The lake fell below 1,075 feet (327 meters) above sea level this year, triggering mandatory cuts for Arizona, Nevada and Mexico in 2022.

The states had volunteered to cut back on water before that threshold hit under a 2019 drought contingency plan.

Arizona relied heavily on compensated water contributions from the Colorado River Indian Tribes and the Gila River Indian Community to fulfill its obligations under the drought plan. It's expected to do the same for the 500+ Plan.

"The reservoir is so low now that everyone realizes that they are vulnerable," said Ted Cooke, general manager of the Central Arizona Project.

As a junior water rights holder, Arizona takes the biggest hit during any federal shortage declarations for the lower basin. Cooke said there won't be time for a do-over if Arizona takes all the reductions.

Lake Mead, which straddles the Nevada-Arizona line, was at 1,065 feet (324 meters) on Wednesday.

For California, which receives more than half the hydropower, the new deal is particularly urgent, said Adel Hagekhalil, general manager of the Metropolitan Water District of Southern California.

"As levels drop at Lake Mead, it's basically strangling everything," Hagekhalil said.

"It’s all based on modeling that may or may not be correct," Sorensen said. "Whether even the 500+ Plan is enough, I just don’t think people know."

Next year marks 100 years since the creation of the compact that apportioned the river's water among seven Western states during an unseasonably wet era. Mexico was included later. Wyoming, Colorado, New Mexico and Utah are in the upper basin.

In the years since, federally subsidized water projects allowed cities and farms to balloon. As scientists say climate change is making the West warmer and more arid, far less water is available in the system to meet demands of all users.

The Associated Press receives support from the Walton Family Foundation for coverage of water and environmental policy. The AP is solely responsible for all content.