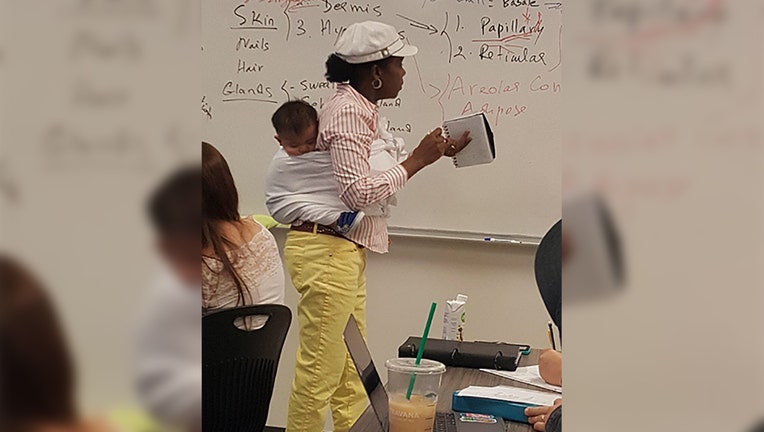 LAWRENCEVILLE, Ga, (FOX 5 DC) - Not all heroes wear capes, and sometimes you can find them in a classroom.

Like one particular college professor who is being hailed a hero for helping with a student’s baby so she could take notes during a 3-hour class.

Dr. Ramata Sissoko Cissé is an educator at Georgia Gwinnett College. She’s also an activist, a parent but above all, she is a lover.

“She cares about a stranger on the street in the same way that she cares about her dearest friend.” Her daughter, Anna Cissé, told FOX, “Her love doesn't discriminate, and if you have ever interacted with her, you'll know that.”

And in a viral tweet from Anna, social media caught a glimpse of what many of her students have first handily experienced.

Unable to find a babysitter, a student showed up to class with her baby. Studying and taking care of a child can be very challenging, so to make sure she could take proper notes, Dr. Cissé offered to carry the baby.

She strapped the little guy around her back and carried him through the entire lecture. As if that wasn’t enough, she even fed him—talk about the ultimate multitasker!

Anna’s tweet contained a picture of the heartwarming moment and her caption read:

“My mom is my role model. Her student couldn’t find a babysitter today & being the true African mother that she is, taught a THREE hour class with the baby on her back & fed him. I’m so blessed to be raised by a woman who loves the world as much as her own children.”

She says Dr. Cissé truly cares about her students and that was reflected in a myriad of tweets from former and current students of the professor.

“I recognize that style of hat anywhere! Dr. Cisse is BY FAR one of the best professors I’ve ever had.”

"No, lie your mom is my Anatomy professor and this just happened on Thursday in our class. She’s probably one of the best professors I’ve had! Dr. Cisse is the Goat”

Anna says her mom is her biggest supporter and is the one person who isn’t afraid to push her to the limit.

It is a privilege to have been raised and continue to be guided by such a radiant person and there isn't a day that goes by that I take that for granted.

Dr. Cissé has been embracing all the social media love, but was surprised at the amount of coverage the story received.

“She feels as if that is the natural reaction that anyone would have when put in that situation.” Anna said, “And I think her reaction speaks to her character more authentically than anything I could describe.”

One thing is for sure, our hat goes off to all educators who go above and beyond to ensure the success of their students -- like Dr. Cissé!