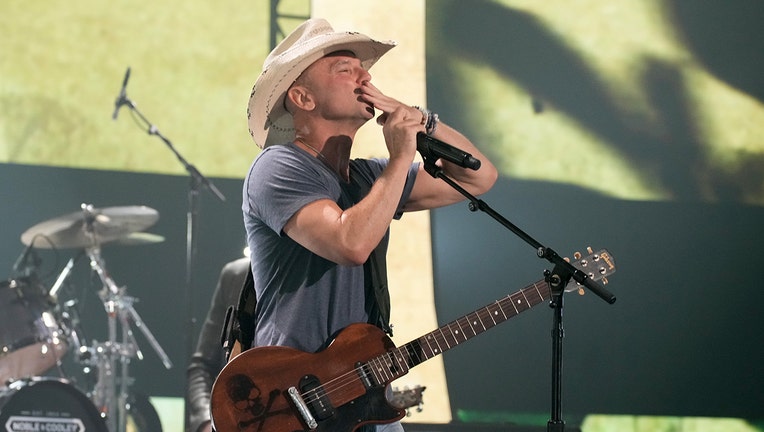 TAMPA, Fla. - Kenny Chesney knows all about a wall of sound. He creates one at each of his concerts.

So when the country music superstar stood in SoFi Stadium at the Super Bowl in February, he couldn’t help but think ahead to when his "Here And Now" tour would reach the venue on July 23.

"The Super Bowl is one of the most exciting nights of the year no matter what you’re into," says Chesney, a rabid football fan as well as one of the best-selling recording artists of this century regardless of genre. "But being a new stadium, LA, those teams, it was a convergence of everything. We had a blast, watching it, being together. Don’t underestimate the power of being together -- especially on a big night -- and everyone missed that more than they even knew. So, yeah, it was intense in the best way."

That’s the atmosphere Chesney fully expects when he launches the tour April 23 at Raymond James Stadium in Tampa. His concerts draw full houses at NFL stadia, but because of the COVID-19 pandemic it has been three years since most cities have hosted his tour. The ambitious upcoming tour includes 18 plays at 16 NFL stadiums and two MLB arenas, plus a bunch of smaller venues. 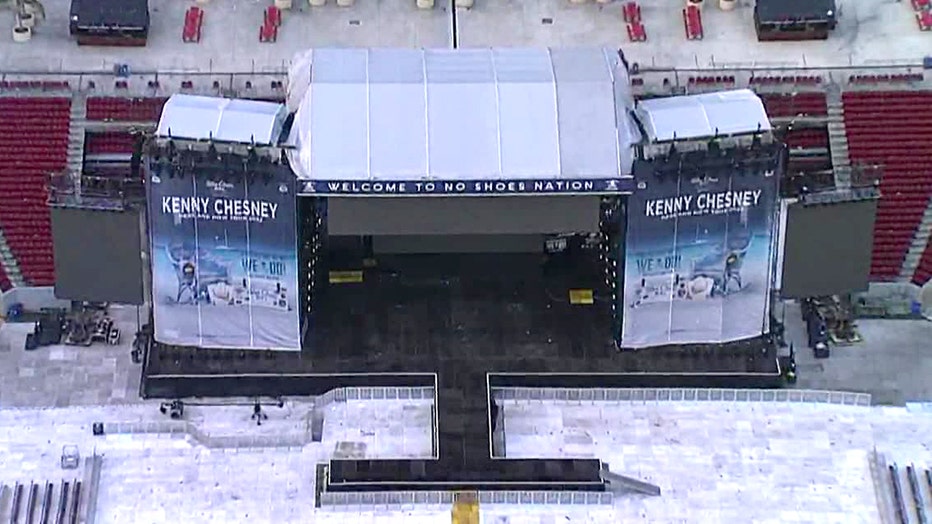 An aerial view from SkyFOX of the stage setup for Kenny Chesney's first tour stop at Raymond James Stadium in Tampa, Fla.

"And I think our crowd is going to be just as intense and dynamic in a different version of that same way," he notes of the SoFi stop — though he quite possibly could experience that same atmosphere at any of the 39 overall tour locales. "We were supposed to be part of the opening set of shows (in 2021), which is a great thing to be part of. Then the world stopped. Now we’re going to pick that up, and if I know that Southern California crowd who packed the Rose Bowl, its going to be insane."

While Chesney hasn’t toured, he’s been ultra busy writing and recording music — always with an eye on returning to the road to share it. Canceling 2020 and 2021 concerts was painful for all artists, naturally, and Chesney has insisted that this year’s shows will not be limited musically, in their staging, and, most importantly, with attendance.

Indeed, in Tampa, organizers opened up more seats several times; that is a show that went on sale 932 days before Chesney will take the stage

"When we made the decision to not go out last year, it was because there were too many tickets sold -- and I didn’t want to be in the position of people who’d held onto their seats being told, `Yeah, well, you can’t come,′ " he says. "No Shoes Nation is a cohesive place; part of the fun is how the people who live in these songs come together. You can hear them in the parking lots tailgating; you see them lined up for the opening of the lots. I didn’t want to go out until everybody could be a part of it. Not the most we could get in, but every single person who wanted to be there.

"As long as I’ve waited ... they’ve waited that long, too. So, no No Shoes Nationer left behind. You want to rock with us? C’mon down. We’re here. We’re ready. Let’s see how loud we can get, how much fun we can have and how many memories we can make every single night."

It’s been a long time since he’s spent those nights together with thousands upon thousands of fans. When their voices come together with his, it has the feel of a communal celebration. Yet, those concerts also are enlivened by the location: At the end of nearly every song, the explosion of cheers is reminiscent of the noise generated when the home team scores a touchdown.

No matter where Chesney touches down, from Florida to Foxboro, from Minneapolis to the Meadowlands, that environment is repeated.

MORE: Jada Pinkett Smith 'hurt' Tupac when she asked him not to beat up Will Smith years ago, friend claims

But then it wasn’t. For two-plus years.

"You do what you do," explains Chesney, who will be joined by country supergroup Old Dominion, Carly Pearce, and Dan and Shay for much of the tour. "When you can’t play for the fans, who are really just friends at this point whether we meet or not — that’s a lot of why we call them No Shoes Nation — I still turn to music. It was frustrating to not be able to play these new songs for people, and we have a few in the show, but I want that to be a surprise, so putting the setlist together was hard. But working up the new songs, and having time to really get the feedback, hear what this album meant to people, it was amazing seeing how strong the response was to songs like `Here And Now.′ But even the waltz `Knowing You,′ it tells me people are really listening to these albums, really using the music to help them get through not being together, too.

"I never thought this music would be doing that, I can say that much. But I’m so glad it has."