A 20-year-old Virginia man with autism posted a letter on LinkedIn asking potential future employers to take a chance on him. The letter went viral and landed him a summer scholarship.

Ryan Lowry, a 20-year-old with autism from Leesburg, Virginia, posted a letter to potential future employers on LinkedIn, imploring them to give him a chance. The letter went viral and landed him a summer scholarship.

Ryan and his father, Rob Lowry, decided it was time to learn about networking and the business world. Rob thought a LinkedIn profile was a good place for his son to start.

Ryan set up his account in February and started brainstorming about what would make his account really stand out to future employers. In an effort to think outside of the box, Rob suggested his son hand-write a letter — not only to show off his penmanship but to be truly unique. 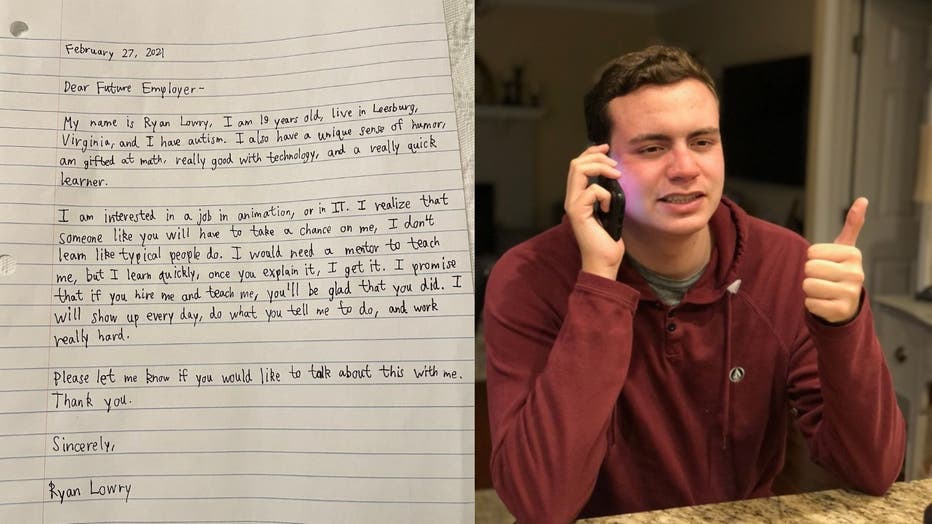 Collage photo of Ryan Lowry at home (R) and the letter he posted to LinkedIn. (Tracy Lowry)

Ryan has always been great at math and loves working with computers. Recently, according to his parents, the idea of working in animation or IT piqued his interest.

"I’ve been on LinkedIn for forever and we set up a simple profile together with the help of our 13-year-old who’s our IT person in the family and I thought it’d be great to teach him about business and relationships," Rob said.

Ryan posted the letter to his new LinkedIn profile on Feb. 27.

My name is Ryan Lowry. I am 19 years old, live in Leesburg, Virginia, and I have autism. I also have a unique sense of humor, am gifted in math, really good with technology, and a really quick learner.

I am interested in a job in animation, or in IT. I realize that someone like you will have to take a chance on me, I don’t learn like typical people do. I would need a mentor to teach me, but I learn quickly, once you explain it, I get it. I promise that if you hire me and teach me, you’ll be glad that you did. I will up every day, do what you tell me to do, and work really hard.

Please let me know if you would like to talk about this with me. Thank you. 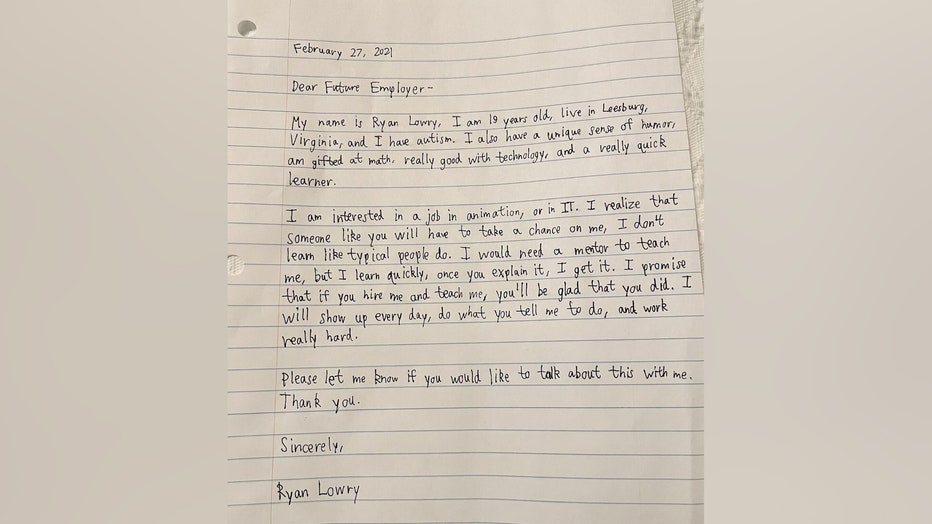 Soon, Ryan was getting thousands of comments and millions of views — so many, that at one point LinkedIn had to shut down his account because the business networking site thought there was a glitch in its system.

"It’s completely unexpected, which I think makes it so cool: It broke the internet," Rob said. "There was so much activity early on in his LinkedIn account, LinkedIn closed it down because they thought something sketchy was going on. They turned it right back on, but there was so much volume for a new profile that they had to be careful about it," Rob said with a wide smile.

Now, Ryan’s LinkedIn account has had almost 7 million views and thousands of visitors leaving comments, sharing stories about their own family members who have autism from around the world.

"I think the beauty about the whole letter is it was raw, it was vulnerable and it touched so many people that there’s so many stories behind just his story in that feed. I mean, I lie in bed at night and cry because there’s just really cool stories and everybody is sharing and it’s become a really cool platform for people like Ryan," his mother, Tracy, said.

People from Scotland, Australia, India and even the CEO of LinkedIn have commented on Ryan’s letter.

And while the family sifts through the words of encouragement and emails from companies like Dell and Dreamworks wanting to help Ryan fulfill his dreams, they have only one goal in mind: Give Ryan his independence.

While his parents love having Ryan in their lives, the family understands that they will not be around forever to guide their son through life.

RELATED: United Airlines colleagues stitch teddy bears out of man’s uniforms for his 2 sons after his death

And even though Ryan has an older sister, 26, and a younger brother, 13, his parents want to put their middle son in a position where he is able to take care of himself. 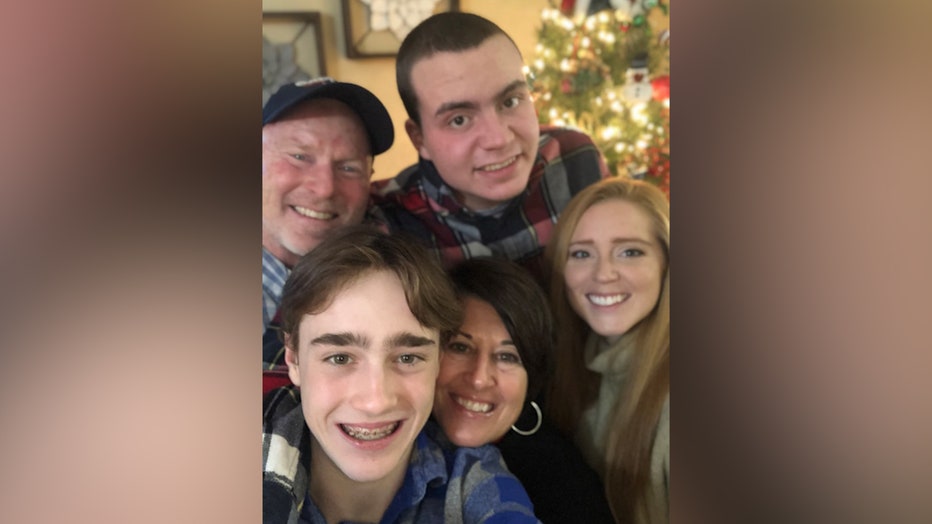 "They just embrace him and they’d be happy to take care of him but he needs to be able to do it himself. And so we need to put him in a position to be able to do that," Rob said of Ryan’s siblings.

RELATED: ‘We loved each other so, so much’: Husband dies from COVID-19 days after getting married

"This is a lower rate than that of young adults in other disability categories, including learning disabilities, intellectual disability or speech-language impairment," according to the Autism Speaks website.

"Of the nearly 18,000 people with autism who used state-funded vocational rehabilitation programs in 2014, only 60 percent left the program with a job. Of these, 80 percent worked part-time at a median weekly rate of $160, putting them well below the poverty level," according to the organization.

But luckily for Ryan and his viral LinkedIn post, he’s already got a full scholarship to help put him on the path to his dream career. 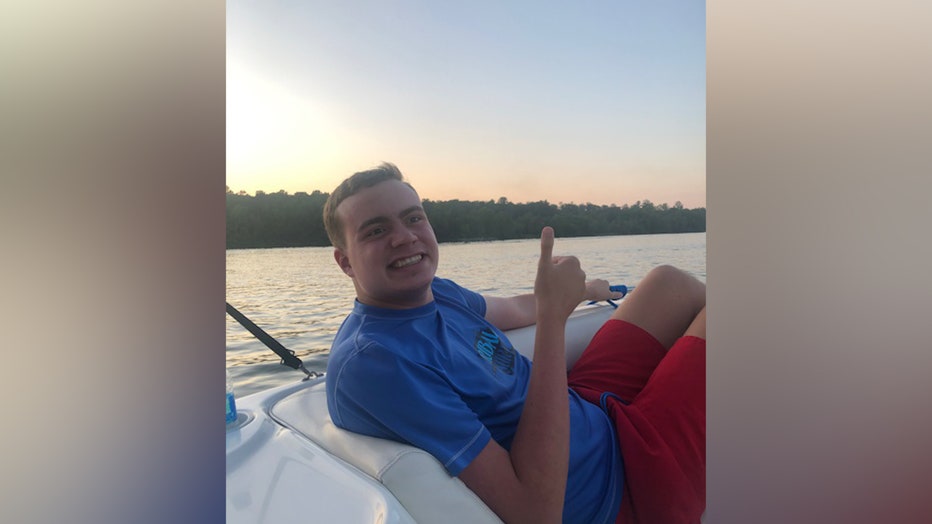 Ryan giving a thumbs up.

Ryan was surprised during an interview with NBC’s Lester Holt with a summer scholarship to Exceptional Minds to help hone his animation skills.

"It’s a program that teaches young adults with autism spectrum to learn how to animate," Ryan explained.

"Ryan’s still in the very early stages of developing animation talents, so this is a great way for him to explore that and further his interests and his aptitude. It was really a neat surprise," Rob said.

Exceptional Minds offers people with autism specialty classes and curates programs to nurture talents a person already possesses and help them grow, according to the company website.

Ryan plans to learn more about animation and hopes that one day his art will be featured in shows and movies.

"I love my cartoons," Ryan said. "My favorite cartoon is ‘Tom and Jerry.’"

The Lowry family is very excited about Ryan’s future.

"This gives us all great hope, not just us but the other folks that are exactly in the same boat because everybody should be able to get a job and live independently and do what they want to do. It’s a really cool story in a year too, that has been forgettable for many of us. I think that’s another reason why this struck such a chord, a positive chord," Rob said.