2021 Taxes: What you need to know as deadline approaches

WASHINGTON - Monday is Tax Day 2022, the federal deadline to file income tax returns and pay taxes owed, and the IRS expects millions of last-minute filings both electronically and through the mail.

The IRS said that as of April 8, it had received more than 103 million returns for this tax season. For comparison, last year more than 169 million people completed an income tax return by the end of the year.

That probably leaves nearly 40% of this year's taxpayers still unaccounted for, with many scrambling to submit their documents by Monday.

Meanwhile, some 15 million taxpayers are expected to request an extension of time to file, according to the agency. But such an extension does not mean delaying payments owed. 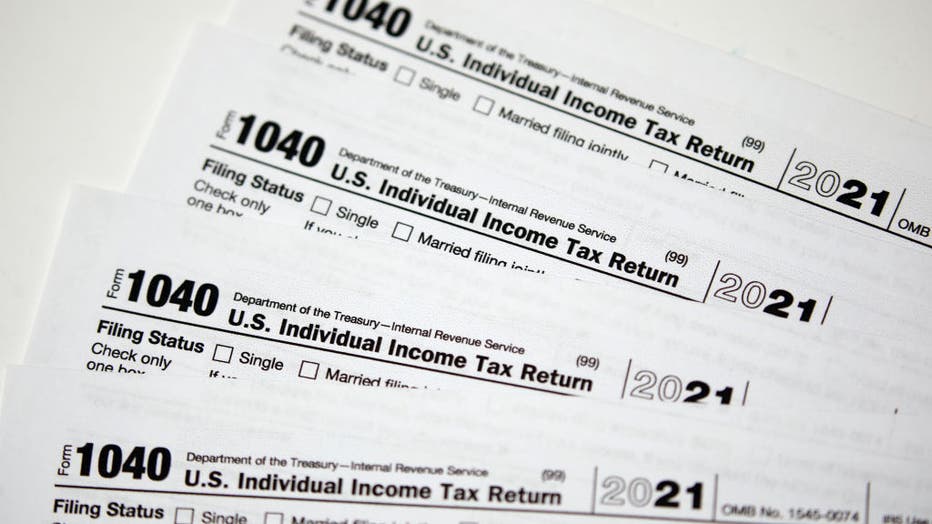 Here’s everything to know about the tax deadline for 2022, filing an extension, and more:

Why is Tax Day on April 18 instead of April 15 this year?

This is because of the Emancipation Day holiday in Washington, D.C., which commemorates the abolition of slavery in the nation's capital.

Taxpayers in Maine or Massachusetts also have until April 19 to file their returns due to the Patriots' Day holiday in those states.

Taxpayers who opt to file electronically or postmark a tax return must submit it before midnight in their local time zone.

How to get a 6-month extension to file taxes

The IRS estimates that 15 million taxpayers will request an extension until Oct. 17 to file, and anyone can request one using Form 4868, Application for Automatic Extension of Time to File U.S. Individual Income Tax Return.

Taxpayers can also request more time by paying all or part of their estimated income tax due and indicating that the payment is for an extension, the agency says. This can be done by using Direct Pay, the Electronic Federal Tax Payment System (EFTPS), or a debit, credit card or digital wallet.

"This way they don't have to file a separate extension form and will receive a confirmation number for their records," the IRS said.

Nina Tross, executive director of the National Society of Tax Professionals, said that if people haven’t filed their taxes by now, "they're better off filing an extension."

However, Tross added, "People don't realize that filing an extension has zero effect" as long as they have paid their income taxes by Tax Day.

"An extension is merely filing a return at a later date," Tross said. "If you rush through a return to get it out the door, and you have to amend it later, you're more likely to get a double look from the IRS."

"You're much better off extending than amending," she said.

What if you can’t afford to pay taxes when they’re due?

For those unable to afford taxes on the day they are due, some may qualify for an online payment plan that allows people to pay off the balance over time.

These IRS payment plans can include:

Some automatically get more time to file in 2022

The IRS provides automatic filing and penalty relief to any taxpayer with an address located in areas covered by Federal Emergency Management Agency (FEMA) disaster declarations, the agency said.

In 2022, deadlines to file tax returns and make payments have been extended for those affected in certain areas of Arkansas, Colorado, Kentucky and Tennessee until May 16, 2022 — and for Puerto Rico until June 15, 2022.

Special rules may also apply for some military personnel serving in a combat zone or a qualified hazardous duty area, according to the IRS — which has a complete list of designated combat zone localities on Publication 3, Armed Forces' Tax Guide.

U.S. citizens and resident aliens living outside the U.S. have until June 15, 2022, to file their 2021 tax returns and pay any tax due, the agency said.

Other deadlines, including $1.5B in unclaimed 2018 refunds

An estimated 1.5 million taxpayers did not file a 2018 tax return to claim tax refunds worth more than $1.5 billion, the IRS said. There has been a three-year window of opportunity to claim that year’s refund, which closes on April 18 for most people.

"If they do not file a 2018 tax return by April 18, 2022, the money becomes the property of the U.S. Treasury. The law requires taxpayers to properly address, mail, and ensure the 2018 tax return is postmarked by that date," the agency noted.

April 18 is also the deadline to make 2021 contributions to Individual Retirement Arrangements (IRAs). Contributions can be made to a traditional or Roth IRA until April 18 but must be designated for 2021 to the financial institution, the IRS said.

Additionally, employment taxes are due on April 18 for "household employees including housekeepers, maids, babysitters, gardeners and others who work in or around a private residence as an employee if they were paid $2,300."

The IRS this year is facing its biggest backlog in history. At the end of the 2021 filing season, the agency had 35.3 million returns waiting for processing. One reason is that every paper document that goes into the IRS is processed by a human, according to the IRS.

Another is that the agency has administered massive coronavirus pandemic-related relief programs over the last several years — like the advanced Child Tax Credit.

And some forms are reviewed by IRS employees and treated as if submitted on paper even if they are e-filed.

This year will be one of the most challenging for the agency, with its record low staffing numbers. The IRS workforce is the same size it was in 1970, though the U.S. population has grown exponentially and tax laws have become increasingly complicated.

Lisa Greene-Lewis, a certified public accountant and a spokesperson at TurboTax, said that if people still intend to file a return by Tax Day, "I would gather all your documents in one place so you don’t leave anything out, like W-2s and 1099s."

Important papers such as the "Letter 6419" that outlines the Child Tax Credit payments a taxpayer should have received this year and the "Letter 6475" for stimulus payments should also be on hand.