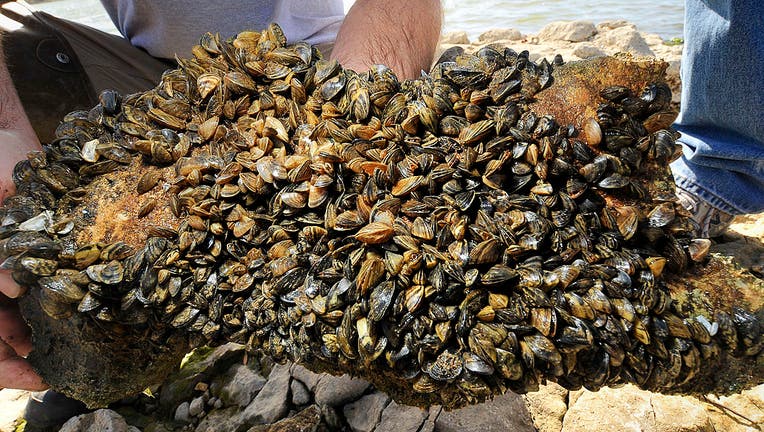 AUSTIN, Texas - Ahead of the Memorial Day weekend, Texas Parks and Wildlife (TPWD) is urging boaters and paddlers who enjoy water recreation this summer to help fight against aquatic invasive species that threaten Texas lakes.

"Memorial Day weekend is the unofficial kick-off to boating season in Texas, and while we want everyone to have a great time, we also want them to avoid giving free rides to invasive species and helping them travel to new lakes," said Brian Van Zee, TPWD Inland Fisheries Regional Director. "The best way to prevent the spread of many destructive aquatic invasive species is to clean, drain and dry your boats and equipment – every time."

Zebra mussels and giant salvinia continue to spread to new areas in Texas. Yet while they remain some of the biggest threats to Texas lakes, other highly invasive species can also be spread or be introduced by boaters, including water hyacinth, crested floating heart and quagga mussels, says TPWD.

Zebra mussels, a non-native shellfish that attaches to hard surfaces, pose a significant threat as they can damage boats and infrastructure for water supply and control, alter lake ecosystems, and cause harm to native species. They also litter shorelines with hazardous, sharp shells that impact shoreline recreation.

Zebra Mussel warning at Lake Travis ahead of holiday weekend

Visitors to Lake Travis for the holidays should make sure to keep an eye out for zebra mussels.

"Zebra mussels and quagga mussels can be attached to boats or even carried by anchors or attached to plants clinging to boats," said Monica McGarrity, TPWD Senior Scientist for Aquatic Invasive Species Management. "Microscopic zebra mussel larvae can be transported in residual water in the boat. Taking just a few minutes to clean, drain, and dry boats can make a huge difference in our efforts to prevent further spread of this highly damaging species and harm to Texas lakes."

Zebra mussels are now found in 33 Texas lakes across six river basins, as well as in river reaches downstream of infested lakes, including in lakes in Central Texas. Quagga mussels, a close relative of zebra mussels, have also been detected in Lake Amistad. The TPWD and partners monitor numerous at-risk lakes around the state for early detection of zebra and quagga mussels, but once they’ve been introduced and become established in a lake, nothing can be done to control or eradicate them.

Giant salvinia is a highly invasive, free-floating aquatic fern that can double its coverage area in less than a week. The invasive plant produces thick mats that make fishing, boating, swimming and other water recreation nearly impossible. 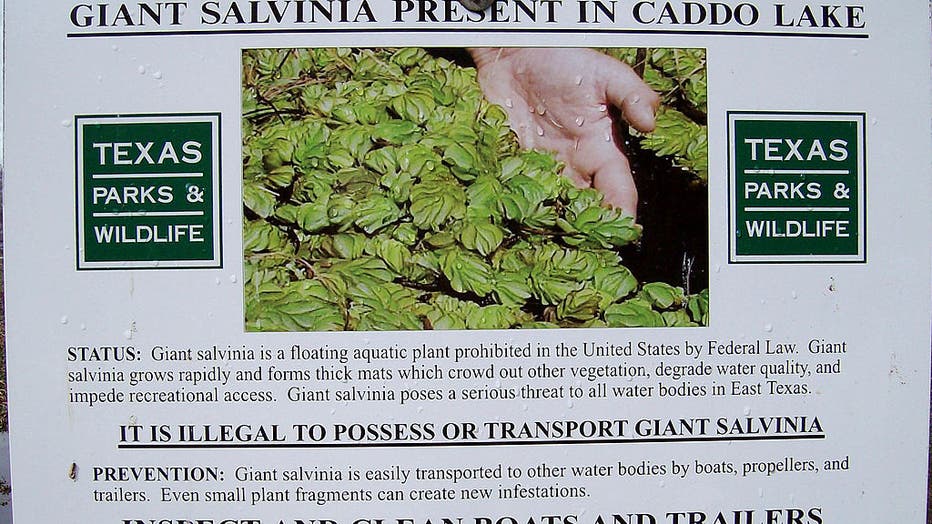 UNITED STATES - APRIL 04: A sign warns boaters of giant salvinia presence at Potters Point on Caddo Lake in Texas, U.S., on April 3, 2008. As Caddo Lake's water temperature rises in May, giant salvinia, a floating, fern-like mat that can grow 18 inch

Giant salvinia is currently present on 23 East Texas lakes and numerous rivers, creeks and marshes between Houston and Beaumont, says TPWD. While TPWD efforts have kept giant salvinia from limiting angling or boating access in Texas public waters, they could still hitchhike from one lake to another on a boat, trailer or other equipment.

Boaters need to remove all plants, mud and debris from boats, trailers, vehicles and gear and drain the water from all equipment and on-board receptacles before leaving a lake. In addition, boats should be dried completely before visiting another lake, preferably for at least a week. Washing the boat and compartments using a carwash or spray nozzle on a water hose can help to reduce the risk of spreading aquatic invasive species if drying is not possible.

If you have stored your boat in the water at a lake with zebra mussels, it is likely infested with zebra mussels and poses an extremely high risk for moving this invasive species to a new lake. Before moving your boat to another lake, call TPWD at 512-389-4848 for guidance on decontamination.

Other equipment stored in infested lakes such as barges, docks, hoists and pumps etc. are other potential vectors for spreading invasive species so those items also need to be fully decontaminated before transporting to another waterbody.

An invasive species is "musseling" its way into Central Texas.

Transporting prohibited invasive species in Texas is illegal and punishable with a fine of up to $500 per violation. Boaters are also required to drain all water from their boat and onboard receptacles, including bait buckets, before leaving or approaching a body of freshwater.

Additionally, anyone who spots zebra mussels on boats, trailers, or equipment being moved should immediately report the sighting to TPWD at 512-389-4848.

TPWD and partners monitor for zebra mussels in Texas lakes, but anyone who finds them in lakes where they haven’t been found before should report them immediately by emailing photos and location information to AquaticInvasives@tpwd.texas.gov.

Texans can check out an online status map showing all lakes where zebra mussels have been found in Texas. For more information on how to properly clean, drain, and dry boats and equipment, visit the TPWD YouTube channel for a short instructional video.

Information for marinas and owners or buyers of boats stored in the water on lakes with zebra mussels can be found on the TPWD website. To learn more about zebra mussels and other invasive species in Texas, click here.

An invasive species somewhat new to the Austin-area now poses a threat to an iconic swimming spot.