AUSTIN, Texas - Lake Placid is 'fully infested' with zebra mussels, according to the Texas Parks and Wildlife Department (TPWD). Infested status means that there is now evidence of an established, reproducing population of zebra mussels in the lake.

TPWD also said zebra mussels had been detected at Medina Lake. The detection in Medina Lake, located near Bandera, marks the first introduction of invasive zebra mussels in the San Antonio River Basin.

"Finding zebra mussels in a new river basin, unfortunately, means that they’ve most likely been transported there by boats, barges, or other equipment that didn’t take appropriate precautions to prevent their spread," said Monica McGarrity, TPWD Senior Scientist for Aquatic Invasive Species. "The vigilance of all boaters and anglers is needed to stop or slow the further spread of zebra mussels in Texas lakes." 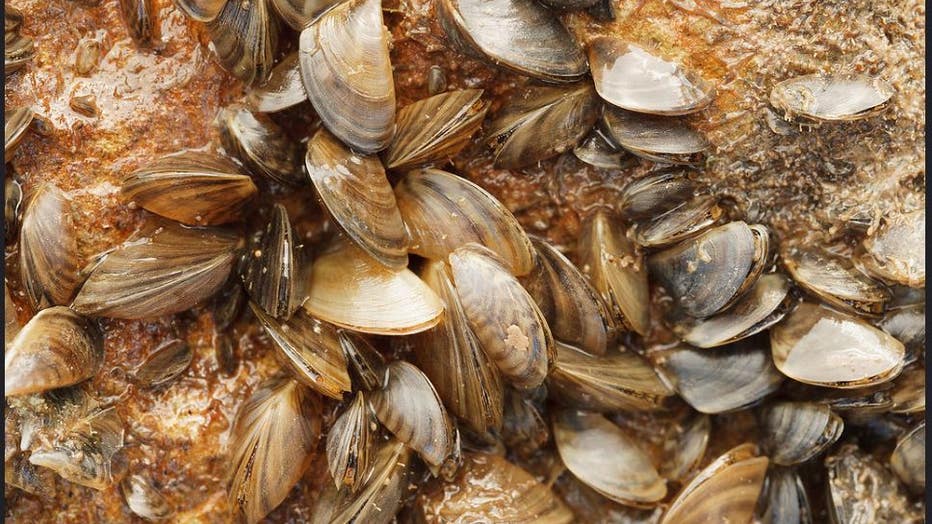 Infested status means that there is now evidence of an established, reproducing population of zebra mussels in the lake. (Texas Parks & Wildlife)

According to the Texas Parks and Wildlife Department, a member of the public submitted a report with a photo to TPWD of a zebra mussel located at a boat ramp near the mouth of Haby’s Cove on Thursday, February 11. Shortly after the winter storms, TPWD staff conducted searches at the site where the original mussel was found and near Red Cove Marina.

Biologists located two zebra mussels attached to rocks along the shoreline near the site where the first mussel was discovered, according to TPWD.

The Bandera County River Authority & Groundwater District (BCRAGD) conducted a separate search on Wednesday, Feb. 24, and located a single zebra mussel attached to a settlement sampler at a dock approximately three miles upstream from the first location where zebra mussels were detected.

Due to these discoveries, Medina Lake will be designated "positive" for zebra mussels, which means there have been multiple detections, but evidence of a reproducing population has yet to be discovered. Plankton sampling for zebra mussel larvae will take place in May/June when they begin spawning, and settlement sampler monitoring and shoreline surveys will continue to determine if an established, reproducing population is already present or monitor its development, according to TPWD.

TPWD is encouraging boaters and homeowners on Medina Lake and Lake Placid to keep an eye out for settled zebra mussels on shoreline rocks and structures or boats stored in the water and report any suspected organisms with photos to aquaticinvasives@tpwd.texas.gov.

"Although zebra mussels are now found in 31 Texas lakes, there are still many other lakes in the state that they haven’t invaded. Boaters play a critical role in preventing them from spreading to new lakes. Before traveling from lake to lake, clean, drain and dry your boat and gear. Remove plants, mud, and debris, drain all the water from the boat and gear, and then open up compartments once you get home and allow everything to dry completely," advises Brian Van Zee, TPWD Inland Fisheries Regional Director.