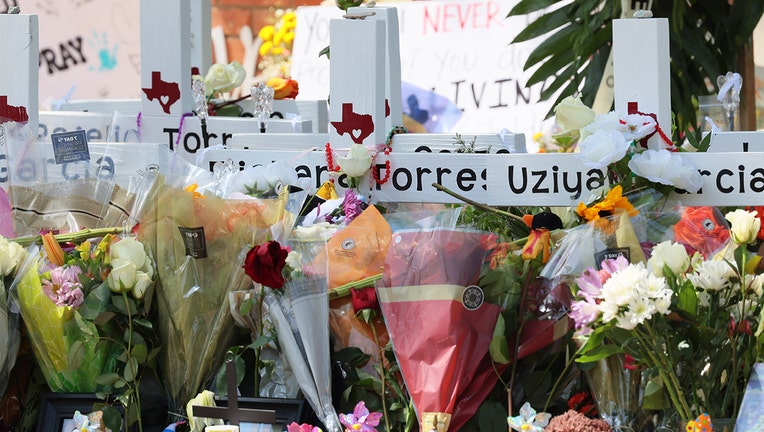 UVALDE, TEXAS - MAY 27: A memorial for victims of the mass shooting at Robb Elementary School is seen on May 27, 2022 in Uvalde, Texas. Steven C. McCraw, Director and Colonel of the Texas Department of Public Safety, held a press conference to give a

Miah and her classmates were watching "Lilo & Stitch" on Tuesday during their last week of school when her teachers, deceased Eva Mireles and Irma Garcia, received an email alerting teachers that a shooter was in the building, the 11-year-old said during an interview. Miah only agreed to the interview on the condition that she would be speaking to a female interviewer since she is afraid of men after the shooting and that she would not be recorded.

The suspected gunman also began "blasting sad" music, which the 11-year-old described as what "sounded like 'I want people to die' music," upon entering the classroom.

While her classmates and friends were being shot all around her, Miah had the intuition to cover herself in her nearby friend's blood to make herself appear dead.

Polk Sheriff Grady Judd and Ryan Petty, whose daughter Alaina was killed in the Parkland school shooting in 2018, discuss school safety in the wake of the mass shooting at a Texas elementary school where 19 children and two teachers were killed earlier this week.

Texas Department of Public Safety Director Steve McCraw said the gunman could have been in the school for 40 minutes to an hour.

"This is an ongoing investigation that is being led by the Texas Rangers. I understand questions are surfacing regarding the details of what occurred. I know answers will not come fast enough during this trying time, but rest assured that with completion of the full investigation, I will be able to answer all the questions that we can," Rodriguez wrote.

Miah is now suffering from trauma and wounds from bullet fragments in her shoulders, back and head. A GoFundMe to assist with the 11-year-old's therapy costs called "donate to help miah" is listed on the fundraising website's Uvalde relief fund.