He will make his last run at Jones AT&T Stadium during the Texas Tech vs. Oklahoma State University football game. The game is scheduled for 8 p.m. on Saturday, November 20.

Fearless and all his riders will be recognized during halftime of the football game.

"Fearless Champion has faithfully served Texas Tech in a way unlike any other horse in the history of the Masked Rider Program," said Stephanie Rhode, director of the Spirit Program. "He has set a record with the number of appearances he has made and the people he has met during his 10 years of service. He truly has lived up to his name."

Fearless made his first appearance during the Meineke Car Care Bowl in December 2012 and began his duties as the Masked Rider's official horse in 2013, according to Texas Tech. Since then, he traveled a total of 150,000 miles and made 2,604 appearances with 10 different Masked Riders.

"When people ask me what I think the best part of Texas Tech is, my answer is always Fearless Champion," said current Masked Rider Ashley Adams. "He has been an incredible horse to be able to share my year with. His personality is my favorite thing about him. I know he has filled my heart as well as the hearts of all of his riders and Texas Tech fans. Thank you for the most incredible ride of my life, Fearless." 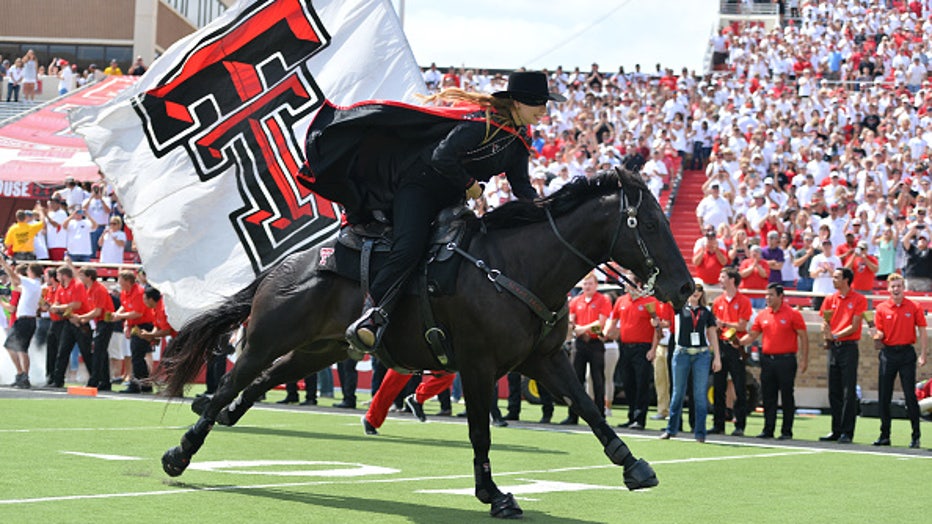 LUBBOCK, TX - SEPTEMBER 12: The Texas Tech Red Raiders mascot Fearless Champion leads the team onto the field prior to the game against the UTEP Miners September 12, 2015 at Jones AT&amp;T Stadium in Lubbock, Texas.Texas Tech won the game 69-20.

Sam Jackson, a professor in the College of Agricultural Sciences & Natural Resources Department of Animal & Food Sciences who tends to Fearless Champion's care on campus, said the way Fearless was able to handle high-stress situations and being surrounded by people made him special.

"Fearless Champion has represented Texas Tech exceptionally well during his tenure as the Texas Tech mascot," Jackson said. "His temperament, personality and consistent behavior while interacting with fans and making his runs during games has been phenomenal. It will be difficult to find another horse that is as talented and enjoys his role as much as Fearless Champion. We are in the process of searching for his replacement. Any assistance from fans and alumni to identify potential candidates for evaluation is welcome."

Fearless will continue to make in-person appearances for the remainder of the school year before officially retiring in the summer, according to Texas Tech.