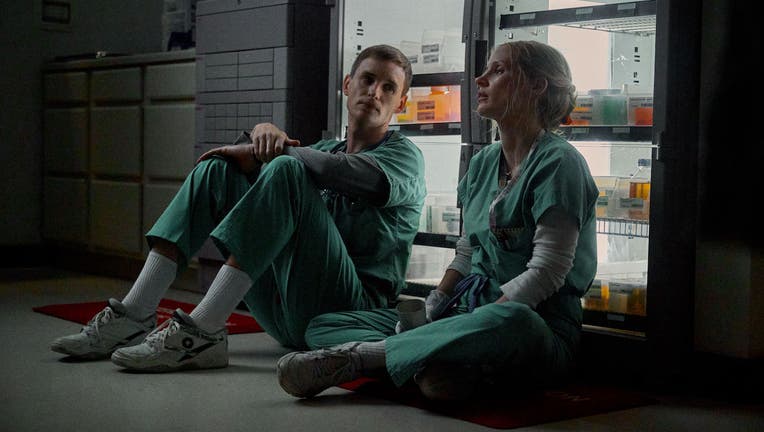 BROOKLYN, NY - "The Good Nurse" opens with a brief prologue in 1996, then it jumps forward to 2003, the year in which it primarily takes place. That date range is fitting, given the era of movies it throws back to. This is a medically-oriented procedural thriller, carried along by a couple of major stars at its center; the kind of movie some people would see in theaters and a lot more would (and probably still will) watch on airplanes. It’s also, in a low-key way, a serial-killer movie, albeit one with an uncommon lack of sensationalism.

As it turns out, an ICU is a chillingly convenient place to commit murders; between bad luck, occasional human error and an exhausted staff, no one bats an eye when a patient occasionally dies semi-unexpectedly. Amy Loughren (Jessica Chastain), a particularly attentive and empathetic (perhaps even "good"?) nurse, barely has time to mourn when this happens to one of her favorite patients; in addition to her overnight shifts, she’s also fighting a heart condition that can’t be treated until her medical benefits kick in and attempting to take care of her two young daughters. Then help arrives in the form of her new co-worker Charlie (Eddie Redmayne), who has a lot of hospital experience — maybe a suspicious amount.

About "The Good Nurse": Two Oscar winners face off

In broad strokes, it’s easy to see where "The Good Nurse" is heading from that first scene: The camera pushes in slowly on Charlie as he watches a flurry of activity around a dying patient at another hospital, way back in 1996. It’s also easy to guess that the movie is based on a true story — not because truth is stranger than fiction, but because, in this case, it’s so chillingly mundane. 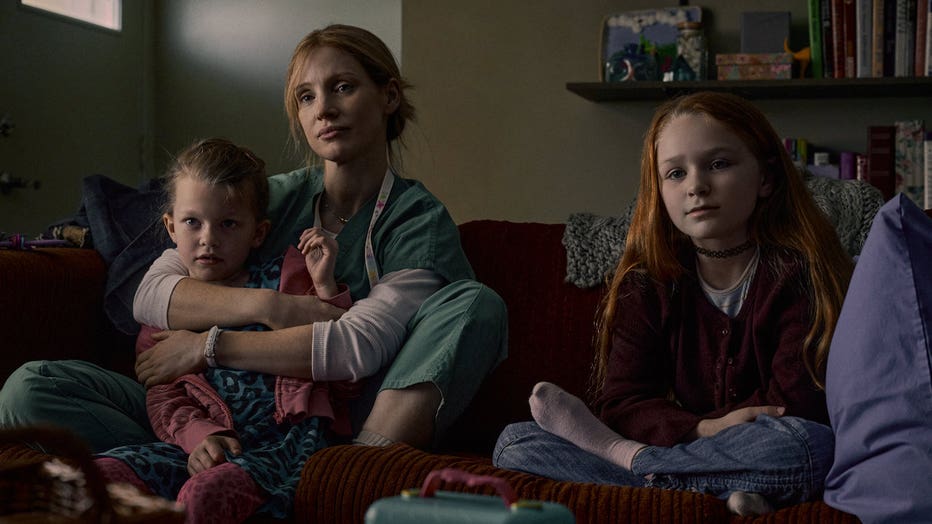 Following the death of that favorite patient, Amy’s hospital conducts an investigation, calling in a couple of cops (Noah Emmerich, Nnamdi Asomugha) for due diligence while not actually giving them much access to files or information. At first, they’re confused about why they’re looking at this case in the first place. Quickly, though, they become suspicious of the administrative evasiveness that’s meant to convince them nothing’s wrong.

WATCH FREE ON TUBI: Jessica Chastain in "Miss Sloane" — get the app

Meanwhile, Amy and Charlie grow closer, as Amy experiences the cruel irony of not being able to seek treatment for a life-threatening condition, even while working regularly to help save lives. Charlie provides a sympathetic ear, and even some babysitting help. But when Amy is questioned about her patient’s death, she notices some inconsistencies. Eventually, she takes a more active role in the police investigation. 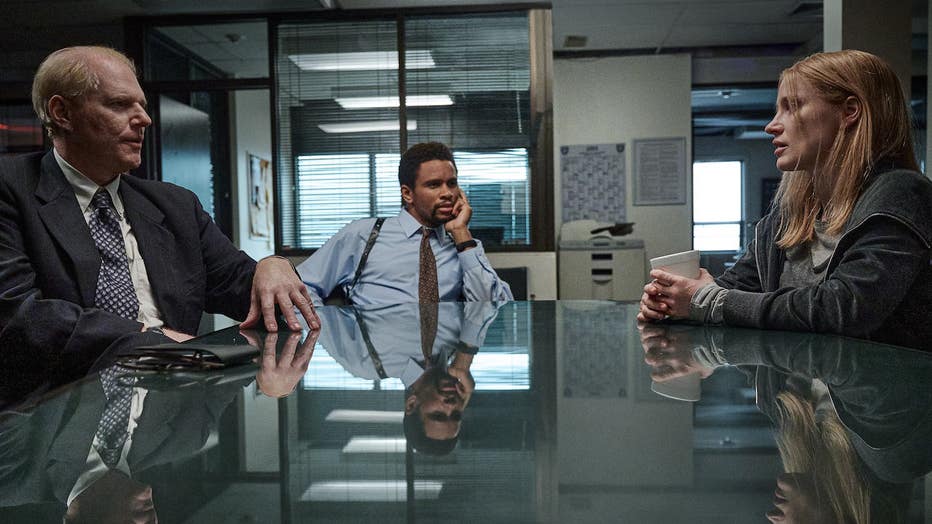 In this uneasy match-up between recent Oscar winners, it’s Chastain who really carries "The Good Nurse." Redmayne leans into his ability to create simpering creepiness out of seemingly normal behavior (appropriately enough, his American accent here makes him sound a bit like Jared Leto), but he’s necessarily elusive throughout. Chastain, on the other hand, makes Amy’s working-class weariness a vital part of the film’s mood.

WATCH FREE ON TUBI: Jeremy Renner is "Dahmer" — get the app

Director Tobias Lindholm and talented cinematographer Jody Lee Lipes enhance that mood with wee-hours lighting and detailed close-ups. During one climactic confrontation between Amy and Charlie, they’re each photographed separately, on opposite sides of a diner booth, with objects in the foreground blotting other images out of the frame and boxing them in.

See "The Good Nurse" for: A creepy, no-frills true-crime story 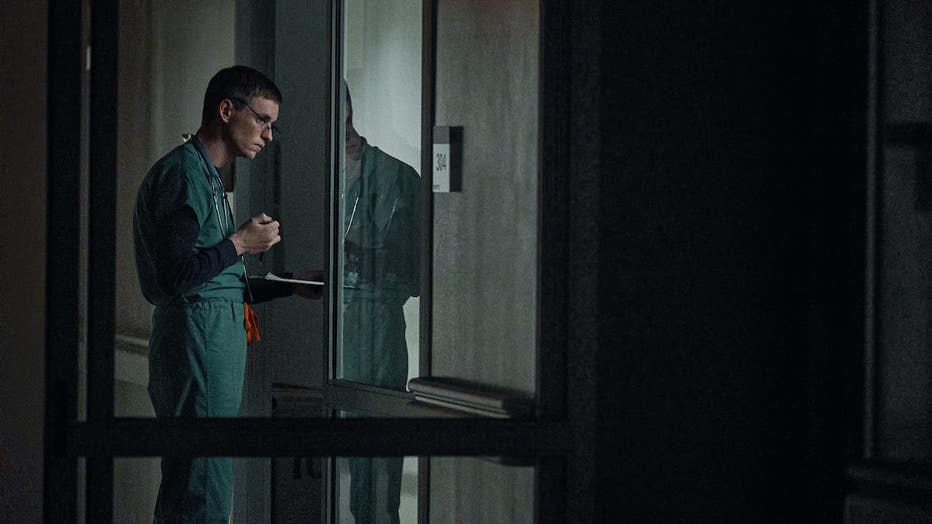 Simple but effective visual tricks like this maintain tension in the moment, even as the movie threatens to become anticlimactic in its final stretch. This isn’t the type of serial-killer movie where the heroine battles her maniacal nemesis on top of a roof in the rain (though Redmayne does get to fit in some self-indulgent overacting at the last minute). It’s not a classic procedural — just a solidly compelling one.

WATCH FREE ON TUBI: The docuseries "Nurses Who Kill" — get the app

"The Good Nurse" doesn’t really add up to more than a scolding of buck-passing hospital administrators and some applause for hard-working nurses. It’s not a true-crime thriller that gets into your bones, like "Zodiac." It is, however, the good kind of Netflix movie: one intimate enough to work as at-home (or in-flight) entertainment, but well-crafted enough to pass muster on the big screen for anyone who happens to see it that way. In other words, it’s good enough for 2003 — and that makes it an oddly welcome addition to 2022.

About the writer: Jesse Hassenger is a writer, editor and film critic based in Brooklyn, New York. His reviews and essays have appeared in The A.V. Club, Polygon, Paste Magazine, The Week and Decider, among others. He also co-hosts the horror podcast The New Flesh, sometimes writes fiction and enjoys rock and roll. His tweets about the Brine King from Aquaman appear at @rockmarooned.

Make it a double feature with "My Friend Dahmer," streaming free on Tubi

My Friend Dahmer (2017): Based on a best-selling graphic novel written by one of Jeffrey Dahmer’s real-life high school friends, this haunting indie charts Dahmer’s high school years in the lead up to his first murder. Former Disney Channel star Ross Lynch is cast against type as the antisocial loner who would go on to become one of America’s most notorious serial killers. Rated R. 107 minutes. Dir: Marc Meyers. Also featuring Alex Wolff, Anne Heche.

"My Friend Dahmer" is streaming free on Tubi — get the app

How to watch "The Good Nurse"

"The Good Nurse" is currently streaming on Netflix, and is also available in select theaters.