Maize and Mermaid said goodbye to 'The Masked Singer'

Unfortunately, Maize and Mermaid did not "survive" this week's "The Masked Singer" episode.

Webber is a world-renowned composer who is best known for both the stage and movie adaptations of classics such as "The Phantom of the Opera," "Jesus Christ Superstar," "Cats," and "Evita."

So, suffice it to say, this guy knows something about music.

Webber joined "The Masked Singer’s" usual panelists for a riveting double-reveal and the audience had to say farewell to Maize and Mermaid. 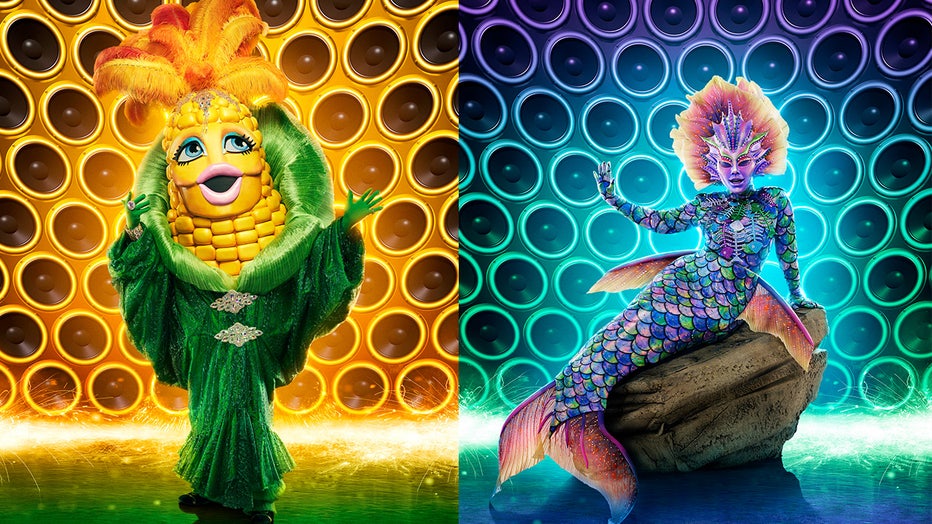 Maize and Mermaid pictured side by side.CREDIT: FOX

Warning: This article contains spoilers for Season 8, episode 4, of "The Masked Singer."

"It’s corn!" (For all you TikToker fans out there). Actually, it’s comedian, singer and actor Mario Cantone.

The "Sex and The City" alum had to unfortunately say goodbye to "The Masked Singer" stage but was left with loads of compliments from Webber after his performance.

"I’ll live on that for the rest of my life, so. I think you’re incredible," Cantone said to Webber after removing his mask.

"You know the best thing is that you said I was young," Cantone joked.

"You sounded so fresh, and it was a wonderful way you hit all those top notes and thank you very, very much because it was great to hear you sing like that," Webber said.

Host Nick Cannon said, while Cantone is a hilarious comedian and talented actor, he was surprised to hear the voice that came out during his performance.

"Well, that’s why I did this, because I want people to know I can sing and I do a lot of Broadway benefits and every time I do one, people say, ‘I didn’t know you could sing,’" Cantone explained.

Panelist Nicole Scherzinger chimed in to say the beauty of "The Masked Singer" is having people like Cantone who have a hidden talent and giving them a platform where they can showcase it to the world.

RELATED: ‘The Masked Singer’: Season 8 premieres Wednesday, here’s what you need to know

The sultry and soulful voice behind the sparkly Mermaid mask was none other than legendary and Grammy-winning singer/songwriter Gloria Gaynor.

Panelist Robin Thicke was so excited to see the iconic singer that he even jumped on top of the panelists’ table and gave her a standing ovation.

"We are so honored, you look gorgeous, you sang gorgeous. Thank you for blessing us," Thicke said.

"Do you know what an honor for me to hear you live like this," Webber said, to which Gaynor answered, "Well it was my honor, thank you."

"You are one of the greatest singers of our generation," Webber added.

Gaynor explained she had been a fan of "The Masked Singer" and thought it would be "so much fun" to partake.

Your next binge: "The Real Dirty Dancing," streaming free on Tubi

How to watch "The Masked Singer"

The eighth season of "The Masked Singer" airs Wednesdays at 8 p.m. EST on FOX. It will also be streaming "The Masked Singer" channel on Tubi, where you can also stream all seasons of the series.
About Tubi: Tubi has more than 40,000 movies and television series from over 250 content partners, including every major studio, in addition to the largest offering of free live local and national news channels in streaming. The platform gives fans of entertainment, news and sports an easy way to discover new content that is available completely free.
Tubi is available on Android and iOS mobile devices, Amazon Echo Show, Google Nest Hub Max, Comcast Xfinity X1, Cox Contour, and on OTT devices such as Amazon Fire TV, Vizio TVs, Sony TVs, Samsung TVs, Roku, Apple TV, Chromecast, Android TV, PlayStation 5, Xbox Series X | S, and soon on Hisense TVs globally. Consumers can also watch Tubi content on the web at http://www.tubi.tv/.