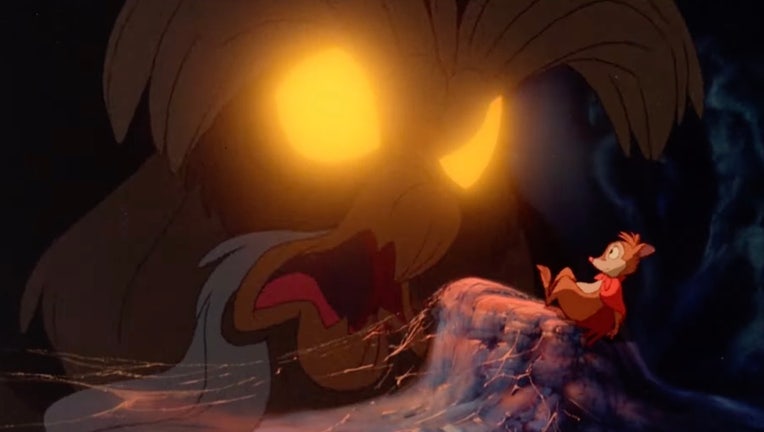 BROOKLYN, NY - In his column "Screen Time," film critic Jesse Hassenger looks at some of the best and most interesting family-friendly titles you can stream for free on Tubi. Previously: Laika’s "The Boxtrolls." This month: "The Secret of NIMH," a spooky animated adaptation of a Newbery Medal-winning classic kids book.

Animal testing, a brutal struggle between rival rat factions, a widowed mom with a sick kid and a potentially lethal housing crisis, plus an extremely creepy owl voiced by legendary character actor John Carradine, all in a movie somewhat inexplicably rated G. But a throwback to when almost any kid-appropriate cartoon, no matter how strange or foreboding, garnered a "G" rating could be just the trick for a spooky-season family movie night.

In this era of Disney-everything domination, it might be hard to picture a time when not even the company’s signature animation business was booming. In the decade following Walt Disney’s 1966 death, the company produced relatively few animated films — and things looked even more bleak as the ‘80s began. So it shouldn’t have been a surprise when in 1979, as Disney Animation was preparing for the release of 1981’s "The Fox and the Hound," a group of creatively unfulfilled animators jumped ship to work for fellow Disney defector Don Bluth.

Their exit led to the eventual entrance of Mrs. Brisby. There was a four-year gap between Disney’s "The Fox and the Hound" and its costly 1985 flop "The Black Cauldron." Into this circa-1982 void, Don Bluth Productions released its first full-length film: "The Secret of NIMH," which is currently streaming on Tubi, along with several other Bluth films.

WATCH FREE ON TUBI: "The Secret of NIMH" — get the app

About "The Secret of NIMH": More darkness than Disney

It's difficult to know what kids accustomed to the fast-paced digital animation of the 21st century will make of the hand-drawn "NIMH" — though anyone with an appreciation for the classic Disney cartoons might see how it fits just to the side of the Disney canon. In some ways, the movies Bluth made in the 1980s, including "NIMH," "An American Tail" and "The Land Before Time," feel like an alternate history of Disney: Here’s what those animators might have gotten up to if they hadn’t been floundering for much of the decade.

"The Secret of NIMH" notably doesn’t wander too far afield for its characters. If anything, it shows off its animation bona fides by closely following the story of a heroic mouse. The film’s Mrs. Brisby (understandably renamed from the source material, Robert C. O'Brien's award-winning kids novel "Mrs. Frisby and the Rats of NIMH") is like a single-mom version of the mice from "The Rescuers," or perhaps a feminist spin on "The Great Mouse Detective." (The latter would gently kick off Disney’s comeback some years later.)

But the movie breaks from Disney movies of the era in several important ways. Stylistically, it embraces darker tones. The occasional murkiness in "The Rescuers" and "The Fox and the Hound" sometimes feels more like clutter than atmosphere, while "NIMH" has a dusky, post-industrial look befitting its mouse-eye-view storytelling. And unlike other Disney menagerie films of this era, it doesn’t feature a bunch of colorful creatures banding together and slapstick-attacking the film’s antagonist while yelling out "charge!"

WATCH FREE ON TUBI: There’s "A Monster in Paris," but don’t worry, he’s nice — get the app

"The Secret of NIMH": A mom fights for her family

The most notable element of the film, though, is Mrs. Brisby herself, voiced by actress Elizabeth Hartman. The widowed Mrs. Brisby and her three children (voiced by Shannen Doherty, Wil Wheaton and Ina Fried) live in a cinderblock on a farm, but an encroaching plow means they’ll soon need to flee. Unfortunately, one of the kids is sick with pneumonia and cannot leave the house. So Mrs. Brisby seeks out the super-intelligent rats of NIMH and their leader, the wise if somewhat nightmare-fuelish Nicodemus (Derek Jacobi), in hopes that they can help her move the family home. (A bit of a spoiler here: Mrs. Brisby eventually learns from Nicodemus that the rats — as well as her late husband — were experimented upon by the National Institute of Mental Health, hence their heightened intelligence, prolonged lifespans and oddly-spelled name.)

Though Bluth would develop a weakness for bland, sometimes nauseatingly cute moppet characters (often, for some reason, outfitted with oversized sleeves), he keeps the Brisby children on the sidelines, giving the spotlight over to the type of parental character Disney movies often kill off, even today.

WATCH FREE ON TUBI: The friendliest ghost you know comes to life in "Casper" — get the app

This choice may well disturb some younger audiences more than a simple off-screen death — and that’s before the giant owl with glowing eyes and a rotating head shows up. Rather than having a young (or child-coded) protagonist rising to the occasion, the movie uses a dash of realism amidst its fantastical story of talking animals: This is a movie about a mother going through a major ordeal to protect the helpless children who could die without her care.

My six-year-old found this entire prospect rather disturbing (though as a cat-lover, she was more incensed that one of Mrs. Brisby’s obstacles is, as with so many Disney movies, a malevolent feline). Still, it’s healthy for children to be exposed to fictional situations that might make them uncomfortable, and as a parent there’s something satisfying about watching a cartoon that doesn’t treat a mother figure as a disposable plot engine. Mrs. Brisby isn’t a saintly convenience who needs to be written out so that her kids can have their self-actualization; she’s the whole movie, obligatory Dom DeLuise comic relief notwithstanding. (He plays a friendly crow who’s always getting tangled up in things, naturally.)

WATCH FREE ON TUBI: Shoot some hoops with "Teen Wolf" — get the app

"The Secret of NIMH" is a strange movie, and not just because it seems determined to keep the Brisby kids tucked away at home; nor is it because several supporting characters seem to be intentionally irritating. It’s a question of focus: Much of the story consists of Mrs. Brisby navigating a life-and-death rivalry between different factions of rats, overseen by a creepy (though, unlike the cat, not evil) owl with glowing eyes. And despite a slim 82-minute running time, it may drag for some kids — or, for that matter, the adults who have grown accustomed to that same rapid, running-in-circles pacing of contemporary big-studio animation.

RELATED: Now streaming: ‘The Bad Guys’ are a good time

Still, it’s worth a shot for both kids and grown-ups (though the adults may want to skip the straight-to-video sequel) because the perspective-shifting 2-D animation makes this world of mice and rats feel remarkably immersive. Disney movies have done this too, of course, but they tend to be a bit more whimsical about it; "Secret of NIMH" makes a farmer’s field look vast and menacing, not unlike how the adult world might appear to a child.

Bluth’s mix of animation traditionalism and forward-thinking stories ultimately couldn’t sustain itself for as long as the Disney studio that inspired, employed and disappointed him. (For an example, his dreadfully incoherent 1992 movie "Rock-a-Doodle" is also on Tubi.) But during a time when family audiences didn’t have access to the bountiful number of choices offered by even a single contemporary streaming studio, "The Secret of NIMH" provided a crucial alternative.

Today’s audiences may have more choices, but thanks to its unique perspective, compelling protagonist and, yes, its creepy-as-heck owl, it’s still a worthy alternative today.

You can find more kids and family entertainment — including "The Iron Giant" and "The Angry Birds Movie" — streaming free on Tubi.

About the writer: Jesse Hassenger is a writer, editor, and film critic based in Brooklyn, New York. His reviews and essays have appeared in The A.V. Club, Polygon, Paste Magazine, The Week, and Decider, among others. He also co-hosts the horror podcast The New Flesh, sometimes writes fiction, and enjoys rock and roll. His tweets about the Brine King from Aquaman appear at @rockmarooned.

Teen Wolf (1985): The ineffable Michael J. Fox charms (and howls) in this endearing ‘80s comedy, in which a teenager discovers that his family has an unusual little genetic streak — one that he can perhaps use to his advantage. He’s a teen! He’s a werewolf! He plays basketball! Who could ask for more? Rated PG. 91 minutes. Dir: Rod Daniel. Also featuring: James Hampton, Scott Paulin, Susan Ursitti, Jerry Levine.

"Teen Wolf" is streaming free on Tubi — get the app