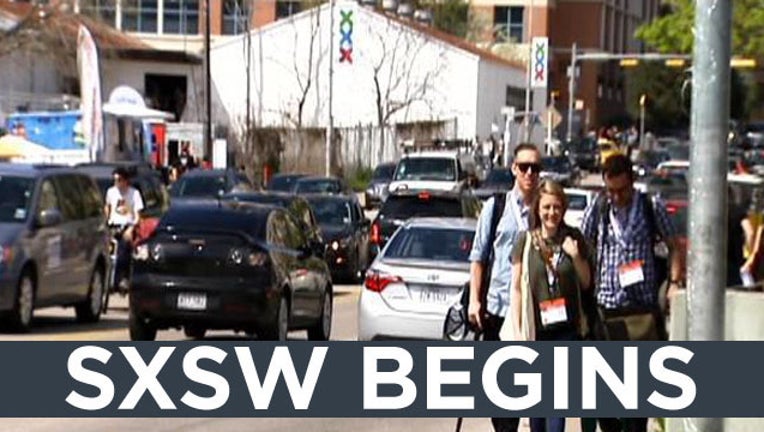 The SXSW squeeze started early. City workers scrambled to set up barricades and road blocks as this annual international migration to downtown Austin began. The early gridlock this year surprised Greg Scott who flew in from the West Cost.

"The traffic coming in on 35 is amazing, couldn't believe it we were all jammed up … I always thought of Austin as like a small town and now it seems like a big city," said Scott.

SXSW is all about providing opportunities to market new ideas. That's why Cristina Shen and her friend traveled from Brazil.

"I'm going to see the Neuro Science technologies and innovation and everything that is new and different," said Shen.

Product pitches can be seen pasted on buses and are offered at just about every street corner. Some hire marketing teams to beat the pavement. Others use squirrely costumes and even bring in dance squads.

There are also those working alone like aspiring musician Detre Val.

"Yes sir, yes sir, man it's about just reaching the people, marketing as far you can, nobody is going to give it to you, so you have to take it," said Val.

At times shopping a dream can be as difficult as finding a little elbow room. It can get little tight in some of the demonstration tents that are set up. But even venues that are still being assembled are popular. This one, which brought its own snow, no longer has advanced tickets.

"How fast did it go? This event sold out in an hour, we have 3 days of activation Saturday Sunday and Monday with times 11 to 7 and all of the spots were taken roughly in the first hour."

While SXSW claims to attract on a daily basis Super Bowl sized crowds, there are some downtown residents who don't stick around. Pedram Amini says he's off to the big apple to visit family.

"The neighborhood just gets out of control just too many people on it … in the 12 plus years I've been living in Austin I've almost never made it to South-By, said Amini.

For those without an escape plan, patience is advised.