The Tick Fire burning north of Los Angeles had charred at least 4,000 acres Friday and forced thousands from their homes.

LOS ANGELES - A raging wildfire north of Los Angeles that burned at least six homes and forced thousands of people to evacuate continued its path Friday, fueled by dry winds and low humidity across the region.

It remained 5 percent contained — and more than 600 firefighters were working to tackle the blaze, the department said.

As hot embers flew, subdivision homes and rural ranch properties were damaged or destroyed in the Canyon Country area of Santa Clarita and in nearby Castaic — where a separate fire broke out Thursday.

"We have confirmed six structures lost. However, we know that number is going to rise today as we have our damage assessment teams out," Osby said.

Osby said at least 40,000 people were under evacuation orders and more than 15,000 structures were threatened by the flames. The cause was unknown.

Firefighters were faced with strong Santa Ana winds Friday, which could intensify the flames and possibly destroy more homes if weather conditions change, officials said. The National Weather Service said wind gusts up to 45 mph were expected in the area. 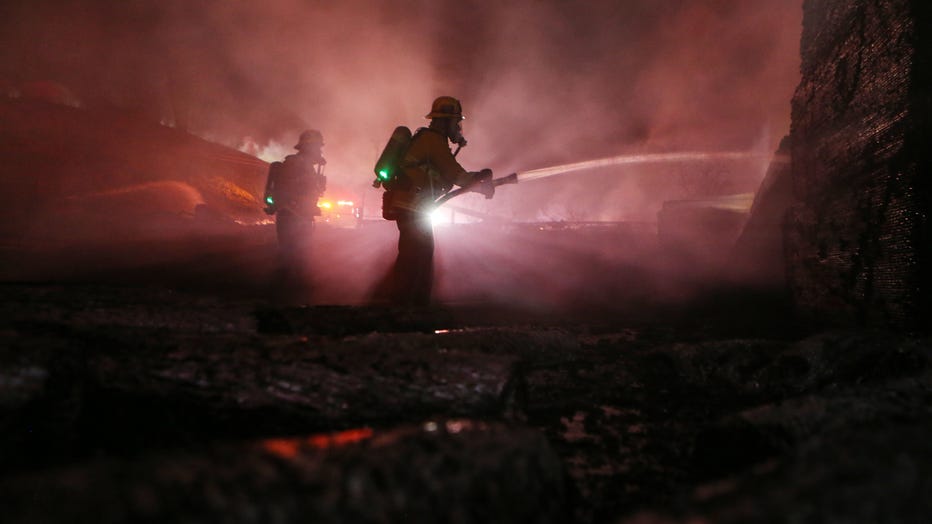 Firefighters work at an industrial facility heavily damaged by the Tick Fire on October 24, 2019 in Canyon Country, California. (Photo by Mario Tama/Getty Images)

Meanwhile, firefighters across the state were battling several wildfires.

In Northern California, the Kincade Fire near the wine country town of Geyserville burned 49 buildings and prompted evacuation orders for some 2,000 people.

The high winds prompted California electric utilities to cut power to thousands of residents across the state, designed to prevent fierce winds from hurling branches into power lines or toppling them, sparking wildfires.