Thunderbirds fly over Austin to honor those working on the frontlines during the COVID-19 pandemic.

AUSTIN, Texas - The Air Force Thunderbirds took to the skies over Austin and San Antonio in a special salute to honor those working on the frontlines during the COVID-19 pandemic. It was part of the Pentagon's Operation American Strong mission to thank healthcare workers, military men and women, and emergency personnel.

The Air Force Thunderbirds were planning on flying earlier in the afternoon but announced the Texas flyover start times were delayed 1 hour due to forecasted inclement weather.

The Thunderbirds had their flyover in San Antonio around 2:20 P.M., it lasted approximately 30 minutes. Austin's flyover took place around 3:40 P.M. and lasted roughly 25 minutes.

The Austin-area flight path of the F-16 Fighting Falcons, which was designed to fly over hospitals across the area, went over Leander, circled Cedar Park, went up to Georgetown, and then back down to Round Rock and Pflugerville.

The jets then headed to East Austin, over to Lakeway, and flew over Oak Hill and down I-35 to Buda, Kyle, and San Marcos before finishing up. 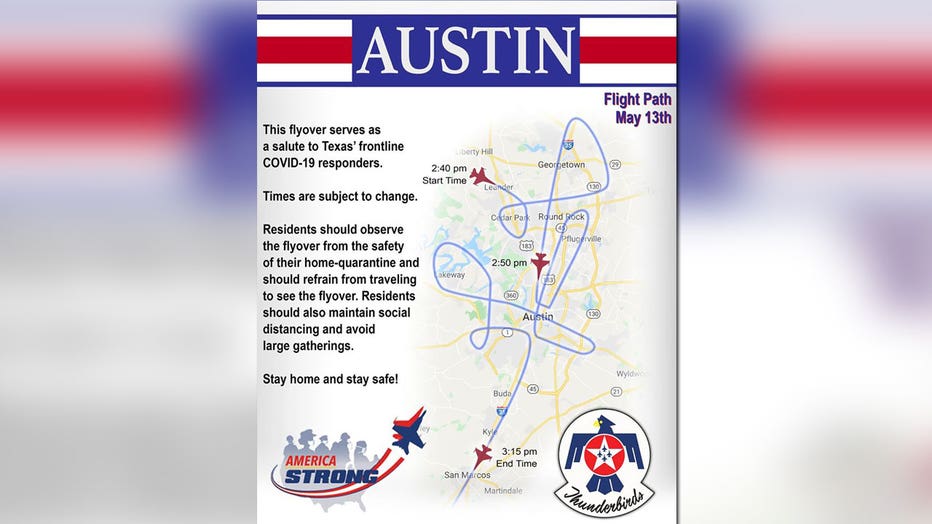 Residents were asked to observe the flyover from the safety of their homes and were told not travel to see it. People were also asked to maintain social distancing and avoid large group gatherings. 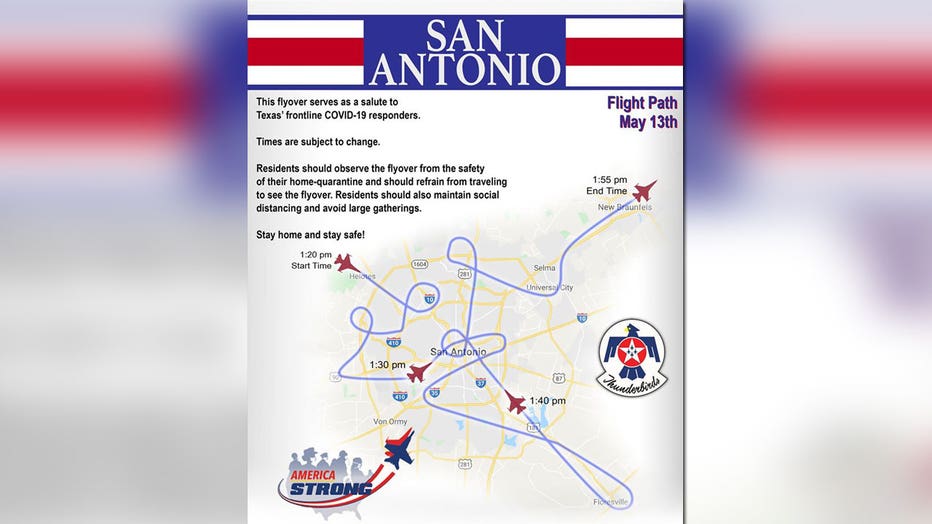 President Donald Trump had announced that the U.S. Navy's Blue Angels and the Air Force's Thunderbirds would be doing flyovers of major American cities in honor of healthcare workers, first responders, and other essential personnel on the front lines of the fight against the coronavirus.

"What we're doing is we're paying tribute to our front line health care workers confronting COVID. And it's really a signal to all Americans to remain vigilant during the outbreak. This is a tribute to them, to our warriors," Trump said.

The Thunderbirds have already made some flyovers like in Las Vegas and the Blue Angels recently did a flyover in Dallas. They are the air demonstration squadron of the U.S. Air Force and are based at Nellis Air Force Base in Nevada.