Credit: Humane Society of the United States via Storyful

SAN ANTONIO - The tiger, who was named Elsa after being found in freezing temperatures in San Antonio during Winter Storm Uri, just celebrated her first birthday at Black Beauty Ranch.

Last week, sanctuary staff celebrated Elsa’s first birthday with extra treats and enrichment activities, including a piñata filled with a variety of scents and foods to stimulate her natural tiger behavior.

"She loves rolling around in the grass, swimming, and playing with her favorite enrichment ball in the pool. She has become more confident, and her sassy, observant and intelligent personality is shining through," Noelle Almrud, the senior director of Black Beauty, said. "Her life on a leash as someone’s pet is far behind her now, and she will never have to worry about anything ever again." 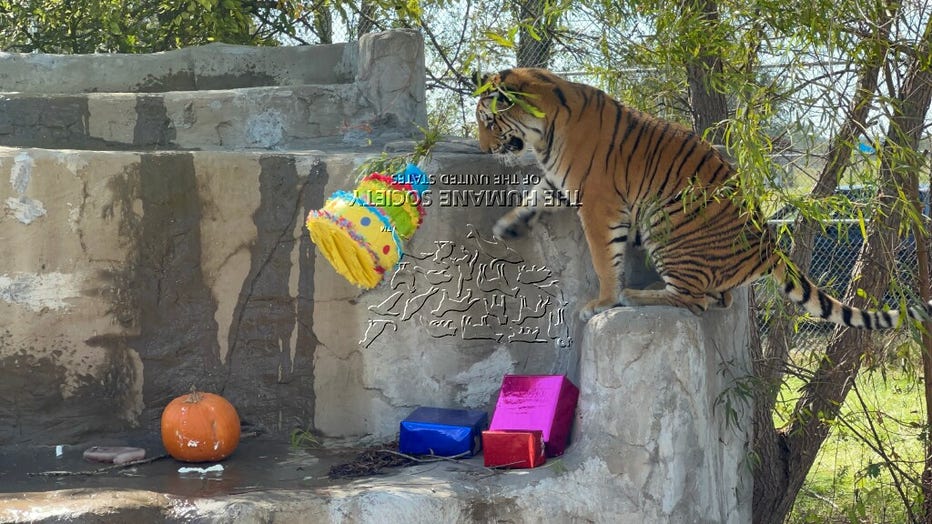 She loves rolling around in the grass, swimming and playing with her favorite enrichment ball in the pool.

Earlier this month, Elsa was moved to a new larger habitat with multi-level platforms, an in-ground pool, waterfall, plenty of trees, and a large hammock, all appropriate for her now that she is a year old.

"Elsa was ready for her big yard. At first, she was skeptical and kept going back to her attached smaller area for reassurance, but soon she started to explore and climbed to the top of her new platform—though she wasn’t quite sure yet how to get down," Almrud added.  "Once she figured it out, she seemed quite satisfied." 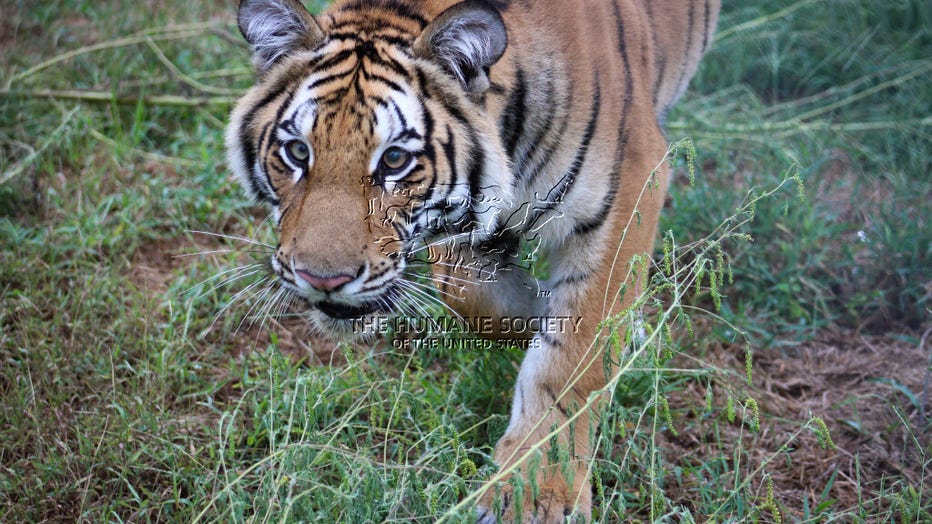 "Elsa was someone’s ‘pet’ and wearing a harness when she was rescued in freezing temperatures by Bexar County authorities," wrote the Humane Society in a press release.

Elsa had been transported to the animal protection organization in Murchison after being found in unsuitable living conditions back in February. She was named Elsa, after the character from the movie Frozen, by the authorities who rescued her.

"Elsa was someone’s ‘pet’ and wearing a harness when she was rescued in freezing temperatures by Bexar County authorities," wrote the Humane Society in a press release. "They placed her at a local wildlife rehabilitation center until the temperatures warmed up enough for her to be safely transported to the sanctuary."

According to the Bexar County Sheriff’s Office, deputies discovered the tiger after receiving a call concerning a "tiger in the cold" on Saturday, February 13. "When [deputies] came out on the scene, they found this beautiful young lady in temperatures that weren’t suitable for her, and actually in living conditions that weren’t suitable for her either," Sheriff Javier Salazar said.

The tiger's former owners were issued a Class C misdemeanor citation, according to KSAT.

The tiger was found in temperatures that weren’t suitable for her. Credit: Bexar County Sheriff's Office via Storyful

Owning a tiger is not illegal in the state of Texas, but owners need to go through a strict permit process. "The state strictly identifies dangerous animals," Shannon Sims, interim director for ACS, told KSAT. "Large cats are on that list, and that includes tigers, lions, cougars, and things like that. You have to have permits from the state, as well as from the federal level -- USDA. However, in the city of San Antonio, they are forbidden."