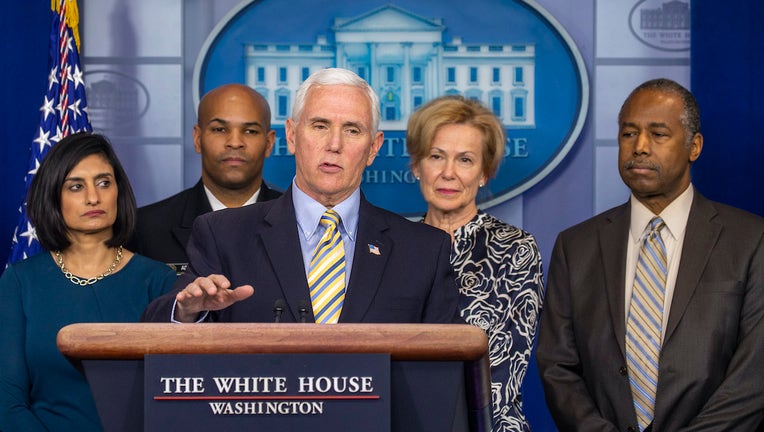 WASHINGTON, DC - MARCH 14: Vice President Mike Pence speaks in press briefing room at the White House on March 14, 2020 in Washington, DC. President Trump also told reporters he was tested for the novel coronavirus Friday night, but did not reveal th

The White House announced that the U.S. will broaden its European travel ban, adding the United Kingdom and Ireland to its list.

Under the restrictions, American citizens, green card holders and others are still allowed to return home to the U.S., but will be funneled to 13 airports and be subjected to health screenings and quarantine orders, according to two people familiar with the plan who spoke on condition of anonymity before the official announcement expected Saturday.

House Speaker Nancy Pelosi says that she and the Trump administration are close to agreement on a coronavirus aid package to reassure anxious Americans by providing sick pay, free testing and other resources, hoping to calm teetering financial markets amid the mounting crisis.

Final details were being worked out, but the top House Democrat, who held daylong talks with Treasury Secretary Steven Mnuchin, expected an announcement Friday. The House could then swiftly vote.

Click here for the latest news on the coronavirus

“We have — are near — to an agreement,” Pelosi said, emerging from her office at the Capitol shortly before 9 p.m. Thursday.

The potential deal between Congress and the White House would cap a tumultuous week in which Washington strained for a comprehensive response to the outbreak that is testing the nation’s political, financial and health care systems.

It builds on an emergency $8.3 billion package approved last week and is aimed at providing additional health and financial resources to arrest the sudden spread of the pandemic and the kind of economic fallout unseen in a generation. Pelosi promised in a letter to colleagues that a third package was yet to come.

The new sick leave benefit would require businesses to provide up to 14 days of paid leave to workers who are home quarantined with the virus, with the federal government reimbursing them through tax credits. The bill enhances unemployment benefits for the jobless and boosts food and nutrition programs for working families, students and seniors.

The late announcement was intended to boost confidence, Democrats said.

“We felt that putting together something that the American people can see cooperation on between the two parties in this difficult moment would be a confidence builder,” said Rep. Richard Neal, D-N.J., the chairman of the Ways and Means Committee, joining Pelosi at the Capitol, “and I think that we approached it that way.”

Meanwhile, the Capitol, White House and Supreme Court all declared themselves off limits to the public for now, symbols of a nation hunkering down.