Scott is featured on rapper Future and producer Southside's track, "Hold That Heat."

The three artists also released a video for the song Saturday.

In the track, the 30-year-old rapper sings, "Hold that, hold that heater."

It's unclear when the track and music video were recorded. A rep for Scott did not immediately respond to Fox News' request for comment.

Last month, Scott spoke out about the tragedy in Houston. Scott was performing at the festival when a crowd surge led to 10 deaths and hundreds of injuries.

In March, the rapper shared with his Instagram followers a link to his philanthropic campaign, Project HEAL.

"Over the past few months I’ve been taking the time and space to grieve, reflect and do my part to heal my community," Scott began. "Most importantly, I want to use my resources and platform moving forward towards actionable change. This will be a lifelong journey for me and my family.

"While it’s easy for corporations and institutions to stay in the shadows, I feel as a leader in my community, I need to step up in times of need," he continued. "My team and I created Project HEAL to take much needed action towards supporting real solutions that make all events the safest spaces they can possibly be. I will always honor the victims of the Astroworld tragedy who remain in my heart forever."

The "Sicko Mode" rapper concluded with, "Giving back and creating opportunities for the youth is something I’ve always done and will continue to do as long as I have the chance. This program will be a catalyst to real change and I can’t wait to introduce the rest of the technology and ideas we’ve been working on. See you all so soon."

"Concert Crush," a new documentary on the Astroworld tragedy, will open in select theaters across Texas for a minimum one-week run April 29.

The statement marked the third time Scott has spoken out about the tragedy since his initial apology video and a subsequent interview.

When Scott, whose real name is Jacques Bermon Webster, took the stage to close out the 2021 Astroworld Music Festival, the crowd was already densely packed with fans looking to get a glimpse of the headlining performer.

Many of them sneaked into the venue throughout the day. Authorities have said 50,000 people attended the event in Houston. Over 300 people were treated at an on-site field hospital at NRG Park, and at least 13 were hospitalized after the crowd reportedly surged forward.

Scott has faced criticism for not stopping the show, but he has claimed multiple times he was unaware of how dire the situation was in the crowd from his vantage point on the stage and only learned of how bad things got after his set had concluded.

The youngest victim of the tragedy was 9-year-old Ezra Blount. The others who died ranged in age from 14 to 27, many of whom were named in the lawsuits that filed in the days after the tragedy. 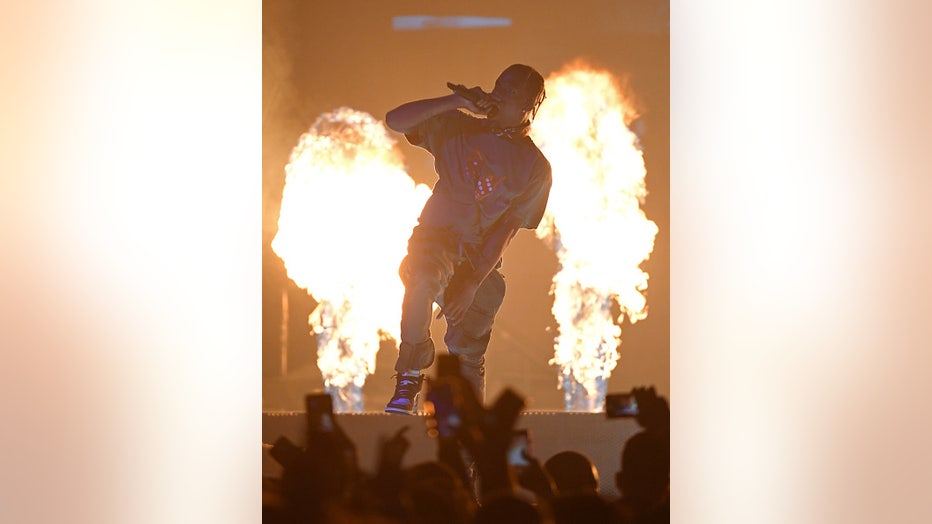 Travis Scott performs during a stop of his Astroworld: Wish You Were Here tour at T-Mobile Arena on February 6, 2019 in Las Vegas, Nevada. (Photo by Ethan Miller/Getty Images)