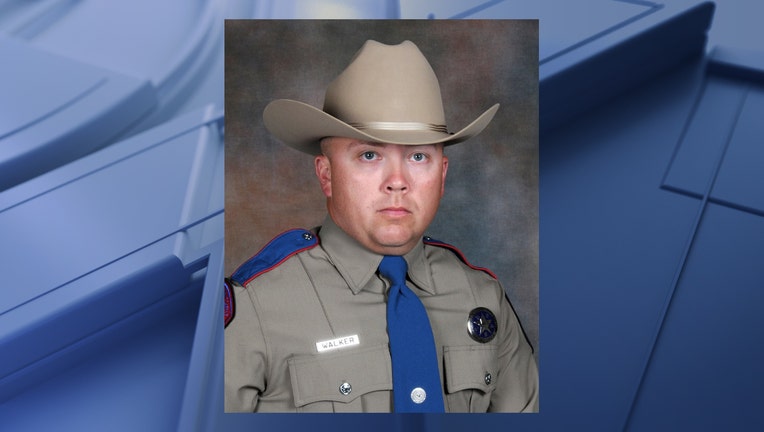 "A beloved father and husband, Trooper Walker was one of DPS’ finest. His dedication to duty and his selfless sacrifice, in both life and his death, will never be forgotten," said DPS on Twitter.

"Our hearts are with the family and friends of Trooper Walker as they grieve his tragic death in the line of duty. Trooper Walker's horrific murder is a solemn reminder of the dangers law enforcement officers face every day to keep our communities safe," said Gov. Greg Abbott in a statement following the announcement of Walker's death. We will always support law enforcement here in Texas, and we are indebted to the sacrifices that they make to serve and protect their fellow Texans."

Abbott is also asking Texas law enforcement officers to turn on their red and blue flashing lights for one minute at 1 p.m. on April 1st to honor Walker and all officers in Texas.

Texas DPS shared an update Monday that after life-saving efforts by Baylor, Scott & White staff, it was determined that Walker "no longer displays signs of viable brain activity." At the time, DPS said Walker would remain on life support until he was able to be an organ donor.

"This final sacrifice embodies Trooper Walker’s actions throughout his life and service as a Texas Highway Patrol Trooper," says DPS on Twitter. "The Walker family is grateful for the continued support and prayers as they remain at Chad’s side."

36-year-old Dearthur Pinson Jr, who is accused of shooting and critically injuring Walker, was found dead Saturday, March 27 from appeared to be a self-inflicted gunshot wound at a home on Highway 84, west of Mexia. A Blue Alert had been issued for Pinson.

DPS says that as Walker was pulling up behind a disabled vehicle, Pinson got out of the driver’s seat with a handgun and fired several shots at Walker through the front windshield. Walker was shot in the head and stomach. After the shooting, Pinson reportedly went back to his vehicle, got a black backpack, and then ran away.