MINNEAPOLIS (FOX 9) - Protesters marched onto Interstate 94 in Minneapolis as part of a rally Wednesday night, as the 2020 election for U.S. president remains undecided.

Hundreds of people gathered for a protest in the Cedar-Riverside neighborhood.

Marchers moved from 3rd Street and Cedar Avenue South onto the I-94 eastbound lanes. Police shut down traffic headed in both directions.

At about 8:20 p.m., the Minnesota State Patrol announced they were starting to make arrests on the highway. There were about 200 people on I-94 at the time, according to state troopers.

The State Patrol said 646 people were cited for being a pedestrian on a freeway and public nuisance and released. Six vehicle were also towed.

The rally was announced on Monday and organizers said the demonstration would go on regardless of the results of the election.

Organizers said their grievances are not necessarily with how the election turns out. But, rather, they say they are concerned with how both major parties often "actively participate in the suppression of the people’s voice." 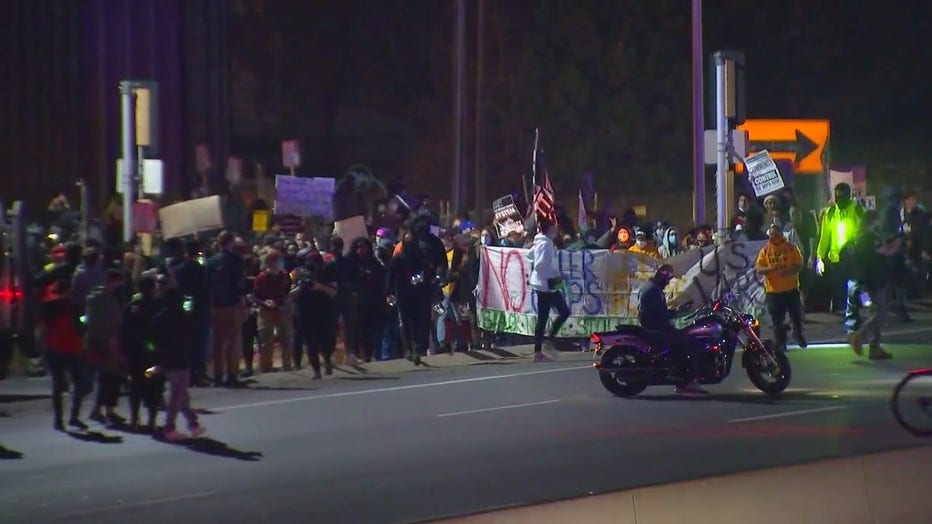 Protesters have moved south on Cedar Avenue onto the eastbound lanes of I-94.

“We are here to say we need real change in this society, and that change comes at the ballot box in part. But, it also comes from people standing up together as working-class folks and demanding justice in the streets,” said Cherrene Horazuk with AFSCME Local 3800.

“We understand that no matter what happens on November 3, we have a lot of work yet to do, and that will not stop,” said Misty Rowan with the Anti-war Committee.

Activists from several groups that fight for equality in the Twin Cities were set to participate in Wednesday's rally.

As of 6 p.m., projections from FOX News and the Associated Press had Joe Biden leading President Donald Trump in electoral points after calling Wisconsin and Michigan for the former vice president.

However, President Trump's campaign has already called into question the results and ballot counting process in battleground states like Wisconsin, Michigan and Pennslyvania--which remains undecided.