Ring doorbell footage capturing the sound of the shots video of the shooting played in court. After the video was played, the brawl took place.

MACOMB, Mich. (FOX 2) - The twin brother of a man who police said was executed in July attacked the suspect charged with the brutal murder after the prosecutor's office played video of the victim being shot multiple times.

Jeffrey Clark was in a Macomb County courtroom on Wednesday for the July 4 shooting of JaRay Robertson in a parking lot at Joy and Franklin. During his preliminary hearing, the prosecutor presented evidence in the shooting, which included surveillance video from the parking lot.

According to authorities, Robertson was murdered after he and Clark got into an argument of some kind that started in Roseville. Authorities said Clark fired shots at Robertson as the victim ran into the city of Fraser before Clark got into a car with a woman and drove around 13 Mile before ultimately finding Robertson running north.

Officials said in July that Clark then got out of the car and shot him to death in a parking lot at Joy and Franklin.

At the time of the shooting, the defendant had a tether on his ankle and records placed him at the location, prosecutors said in July.

On Wednesday, Clark was in court for the preliminary hearing, which is when the prosecution presents evidence that they want to use in the trial. Among the evidence was the surveillance video, which showed a victim laying in the parking lot and another man standing over him with a gun, firing it multiple times.

Authorities in Macomb County have arrested the brother of a man who was shot and killed in July after he attacked the handcuffed man charged with killing him.

The victim is laying on his side, rolling back and forth and he holds his hand up, as if asking the shooter to stop. The video showed at least one shot being fired but a tree partially obscures the view. The suspect then walks away from the victim, leaving him for dead in the parking lot.

After the video was played in court, the prosecution was preparing to introduce more evidence of a Nest video recording. As the prosecution was working to show the video, a sudden outburst occurred in the court as Clark was attacked by a man who has been identified by police to FOX 2 as Robertson's twin brother. 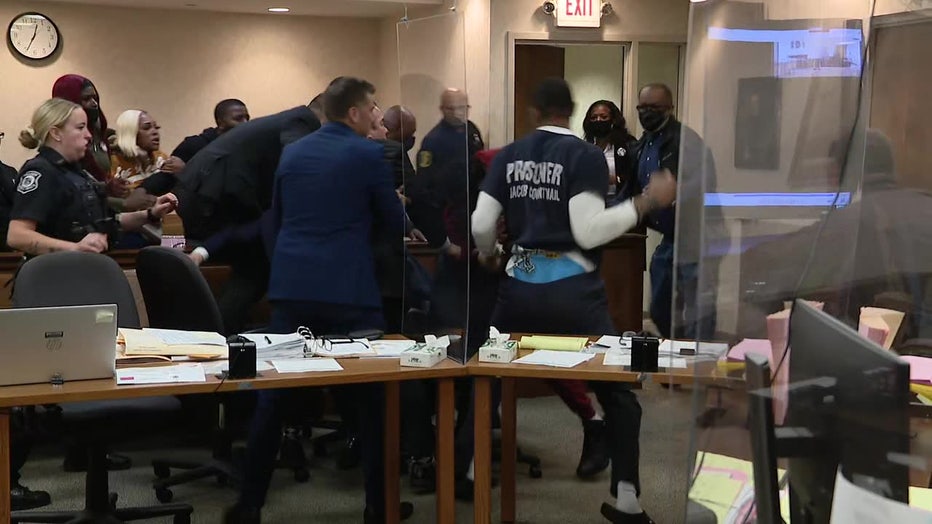 The twin brother of a murder victim attacks the man charged with killing his brother during a court hearing in Macomb, Mich.

The man hit Clark multiple times in the back of his head and back. Clark tried to fight back but was hindered by the waist restraint, which chains his wrists to a chain around his waist.

The two men are ultimately separated by attorneys and deputies in the courtroom. As Clark is led through the courtroom door, he yells "they're going to see you" at the other man.

The man is being taken into custody in the courtroom as the father of the suspect gets into a yelling match with another man.

Robertson's brother is ultimately handcuffed and sat down in the courtroom.

The father of the suspect is later heard apologizing multiple times for his actions and says "he assaulted my son".

As the courtroom is cleared, Robertson's brother sits and says to no one in particular: "He's still shooting him! He's on the ground already and he's still shooting. He's begging you not to kill this man."

Peace was eventually restored to the courtroom and the preliminary hearing continued. Clark was ultimately bound over for trial for murder.

It's not clear what charges Robertson's brother will face.

Macomb County Prosecutor Pete Lucido said in July that Robertson was executed and begging for his life.

"I can say, after reviewing the evidence, this was an execution. The man was pleading for his life," Lucido said. 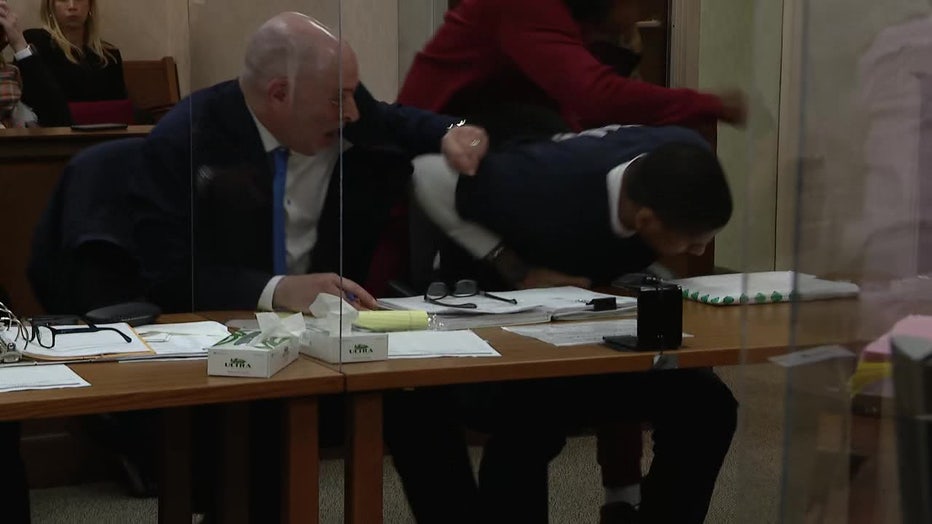 The twin brother of a murder victim attacks the man charged with killing his brother during a court hearing in Macomb, Mich.