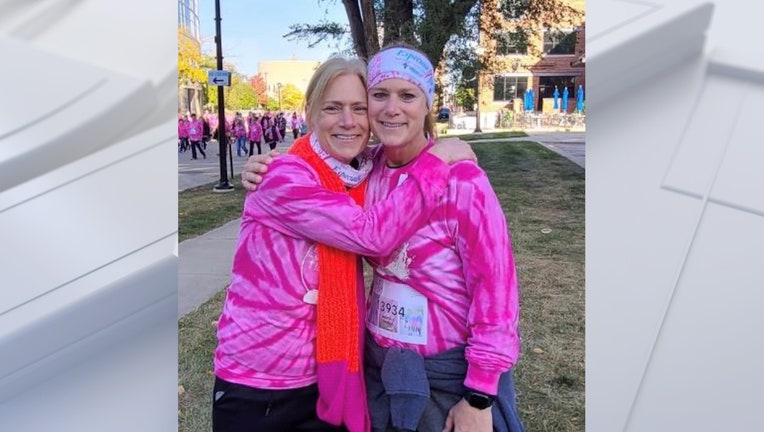 CEDAR RAPIDS, Iowa - As twins, Sarah Seidl and Rebecca Lesnik have done many things together, but one thing they didn’t expect was to battle breast cancer at the same time.

The 49-year-old women of Tiffin and Cedar Rapids, Iowa, were both diagnosed with diseases months apart.

Lesnik received her breast cancer diagnosis first in November 2021 after a doctor noticed benign microcalcifications in her right breast with the potential to develop into cancer. A subsequent MRI confirmed cancer had developed.

RELATED: Woman attends rodeo, gets struck by bull and realizes she has cancer

"I was shocked.," Lesnik told FOX Television Stations. "Cancer is what other people have. There wasn't a family history, so it didn't make sense to me."

"My first thoughts were about my kids and family. I wasn't sure who would take the news the hardest, but I knew it would be devastating to Sarah," she continued.

Lesnik ended up telling her sister. But then Sarah was diagnosed with Stage 1 breast cancer in March 2022, also after mammograms and MRIs.

"I felt like the bottom fell out of my life," Seidl said. " I was initially in shock, then cried and felt defeated."

The sisters then found out they both had the same type of cancer, relying on each other through the battle.

"Of course, you never want to hear a loved one tell you they have cancer, but when it is your twin - your best friend throughout life - it feels more devastating," Seidl added. "We talk almost every day and are always looking out for one another. She is a huge part of my life."

Both sisters underwent a double mastectomy to eliminate the cancer. Seidl followed up with radiation.

The twins are now cancer-free.

"We talk almost every day and are always looking out for one another. She is a huge part of my life," Seidl said.

The sisters are encouraging women to get regularly screened for breast cancer especially if they have a family history.

"There's no particular reason for most of us getting breast cancer," Lesnik added. "We had no history of it in our family. Now all of a sudden, both of us developed it. Just because you don't have a family history doesn't always matter."

Doctors haven’t been able to explain to the sisters how identical twins both developed the same cancer or what were the odds. Seidl said she underwent genetic testing but doctors didn’t find a link to breast cancer.

What is breast cancer?

According to the U.S. Centers for Disease Control and Prevention, breast cancer is a disease in which cells in the breast grow out of control.

Symptoms include a new lump in the breast or underarm, thickening or swelling of part of the breast and irritation or dimpling of breast skin.

The CDC said studies have shown that the risk for breast cancer is due to a combination of factors. However, the main factors that can influence the risk include being a woman and getting older. Most breast cancers are found in women who are 50 years old or older.

A woman’s risk for breast cancer is higher if someone in the family also has it.

October raises awareness for Breast Cancer and LiveNOW from FOX talks with a doctor about the advances in treatments and importance of early detection.

The U.S. Preventive Services Task Force — an independent, volunteer panel of national experts in disease prevention — said women who place a higher value on the potential benefit of mammography over potential harm can choose to begin breast cancer screening once every two years between ages 40 and 49 years.

Three out of the six aforementioned cancer organizations recommend annual mammograms for concerned women who are between the ages of 40 and 49, if they so choose.

Women who are age 50 and older are generally advised to get mammograms done annually or bi-annually.

Treatment can also include chemotherapy, surgery and radiation.

Breast cancer statistics in the U.S.

October is Breast Cancer Awareness Month. The CDC said breast cancer is the second most common cancer among women in the United States.

American women have a one in eight chance (12.9%) of developing breast cancer during their lifetimes, while American men have a one in 800 chance (0.13%), according to the National Institutes of Health’s National Cancer Institute.