Commissioner Ellen L. Weintraub on the Federal Election Commission explains why the risk of foreign influence on U.S. mail-in voting is far-fetched.

WASHINGTON - Six current and former Russian military officers sought to disrupt through computer hacking the French election, the Winter Olympics and U.S. hospitals and businesses, according to a Justice Department indictment unsealed Monday. It details destructive attacks on a broad range of targets and implicates the same Kremlin unit that interfered in the 2016 U.S. election.

The indictment accuses the defendants, all said to be officers in the Russian military agency known as the GRU, in hacks that prosecutors say were aimed at furthering the Kremlin's geopolitical interests and as retribution against its perceived enemies.

They include attacks against Ukraine's power grid; a hack-and-leak operation directed at the political party of French President Emmanuel Macron in the days leading up to the 2017 election; efforts to punish Olympics organizers who had banned Russian athletes for doping, and to impede an investigation into the suspected nerve-agent poisoning of a former Russian spy and his daughter. 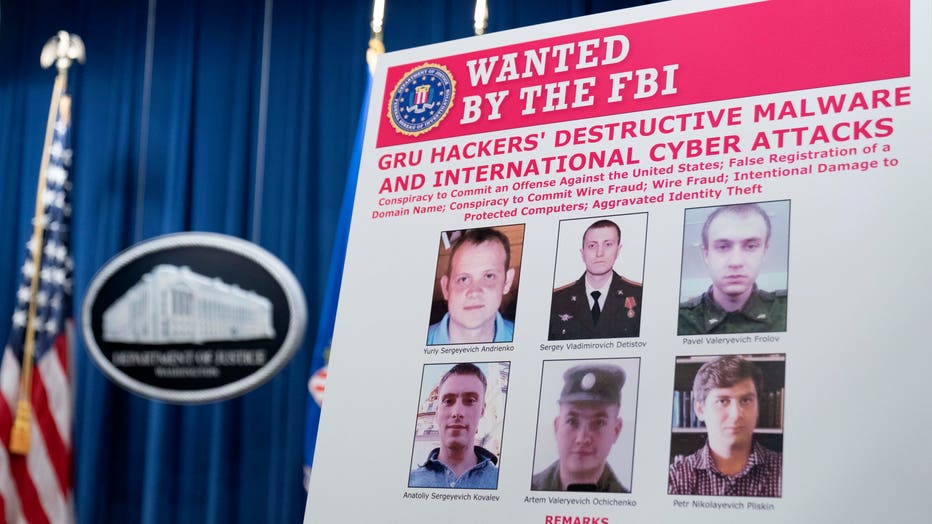 A poster showing six wanted Russian military intelligence officers is displayed before a news conference at the Department of Justice, on October 19, 2020 in Washington, D.C. (Photo by Andrew Harnik - Pool/Getty Images)

The indictment does not charge the defendants in connection with interference in American elections, though the officers are part of the same military intelligence unit that prosecutors say interfered in the 2016 U.S. presidential election by hacking Democratic email accounts. One of the six charged in the case announced Monday was among the Russian military intelligence officers charged with hacking in special counsel Robert Mueller's investigation into Russian election interference.

The 50-page indictment, filed in federal court in Pittsburgh, also accuses the hackers of destroying malicious software in 2017 that crippled computers around the globe, including at a Pennsylvania hospital and a pharmaceutical company. The criminal conspiracy alleged by the Justice Department enables prosecutors to include allegations for victims that are not based in the U.S.

None of the six defendants is currently in custody, but the Justice Department in recent years has eagerly charged foreign hacker in absentia with the goal of creating a message of deterrence.

The indictment fleshes out details about hacks that in some instances had already received significant attention for the havoc they had caused.

The controversy known as the “Macron Leaks," for instance, was the leak of over 20,000 emails linked to Macron’s campaign in the 2017 election in the days before his victory. The involvement of bots raised questions about the possible involvement of Vladimir Putin and the Russian government.

The leaks, which gained huge media attention in France, were shared by WikiLeaks and several Alt-right activists on Twitter, Facebook and others.

After Russia was punished by the International Olympic Committee for a vast doping conspiracy at the 2014 Winter Olympics in Sochi, hackers targeted sports agencies around the world.

More than 250 athletes’ medical records were published and confidential data from some of the world’s biggest sports organizations — the Olympics, world track and field, FIFA — were stolen, in what U.S. prosecutors said was retaliation for the doping punishments.

Other Olympic-related organizations were also hit by hackers: the world track and field body, which suspended Russia from in 2015 over widespread doping; Canada’s anti-doping agency, a trenchant critic of Russia; the Court of Arbitration for Sport, which ruled against some Russian athletes.