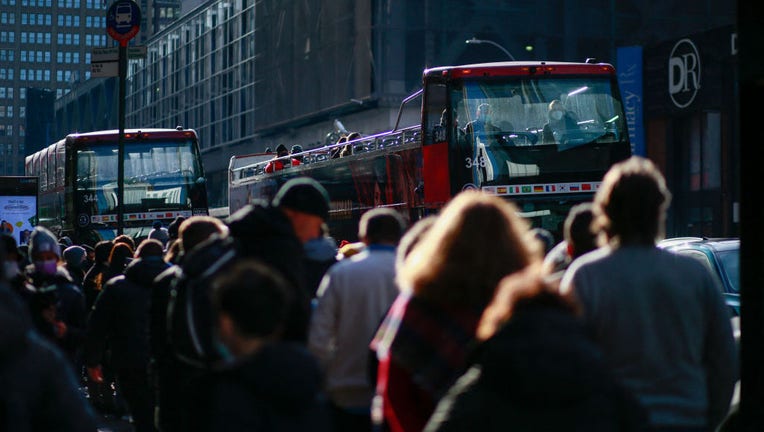 WASHINGTON - Life expectancy in the United States continued to decline in 2021 despite the availability of life-saving COVID-19 vaccines, according to a new analysis.

The findings, published this week on the preprint server medRxiv — meaning it has not yet been peer-reviewed — analyzed provisional government statistics. The researchers predicted that life expectancy dropped again, from 76.99 years in 2020 to 76.60 years in 2021.

Life expectancy is an estimate of the average number of years a baby born in a given year might expect to live. It’s an important statistical snapshot of a country’s health that can be influenced both by sustained trends such as obesity, as well as more temporary threats like pandemics or war that might not endanger those newborns in their lifetimes.

More than 984,000 Americans have died from the virus since the onset of the pandemic in early 2020, according to data from Johns Hopkins University. In 2021, vaccines became more widely distributed. The authors of the study hoped to better determine if 2020’s significant drop in life expectancy rebounded the next year.

US life expectancy drops a full year in COVID-19 pandemic

"Although the introduction and availability of effective vaccines were expected to curb US mortality rates in 2021, slow vaccine uptake and the spread of the Delta variant produced large surges in mortality," the authors noted.

Dr. Steven Woolf, a professor of population health and health equity at Virginia Commonwealth University who help conduct the analysis, told NPR that many of the virus-related deaths occurred in people in the prime of their lives and drove the continued decline of overall U.S. life expectancy.

"Although highly effective COVID-19 vaccines became available in 2021, their uptake was limited by public skepticism and inadequacies in distribution and access," the researchers wrote.

In 2020, Black life expectancy dropped nearly three years, to 71 years, 10 months. Hispanic Americans were found to have longer life expectancy than White or Black Americans, but had the largest decline in 2020.

Experts noted how certain problems disproportionately affected Black and Hispanic people, including lack of access to quality health care, more crowded living conditions, and a greater share of the population in lower-paying jobs that required them to keep working when the pandemic was at its worst.

Dr. Richard Wender, chair of Family Medicine and Community Health at Penn Medicine, discussed the CDC report estimating that U.S. life expectancy dropped a full year and what that means.

In the new analysis for 2021, White Americans drove the decline by 0.34 years, a drop that disproportionately impacted the male population. The figure didn’t significantly change for the Hispanic population between 2020 and 2021, and Black Americans had a slight uptick of 0.42 years.

"Reasons for the crossover in racialized outcomes between 2020 and 2021, in which life expectancy decreased only in the non-Hispanic White population, could have multiple explanations," the authors wrote.

The 2021 drop in life expectancy also widened the gap between the U.S. and other wealthy countries, according to the analysis. Countries like New Zealand, Norway and South Korea actually gained life expectancy between 2019 and 2021, the authors noted.

High rates of obesity and heart disease, along with inequities in access to health care, were already leading the U.S. to lose ground with respect to survival before the pandemic, according to Dr. Ryan Masters, lead author and an assistant professor of sociology at the University of Colorado Boulder.

"Those same factors made the US more vulnerable than other countries to the mortality consequences of COVID-19," Masters said.