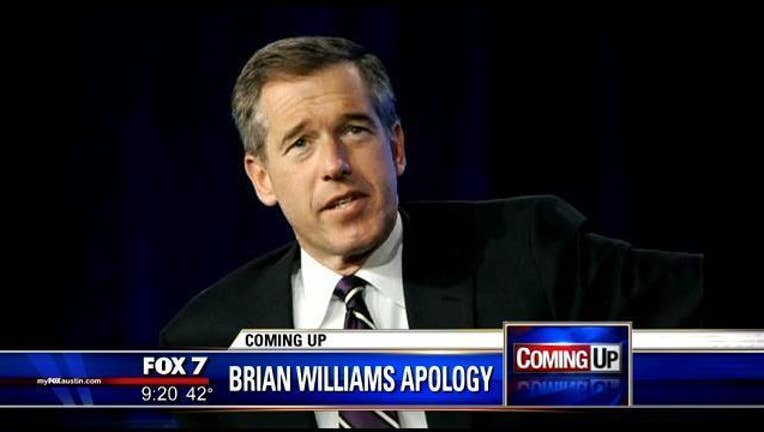 AUSTIN, Texas - NBC Nightly News anchor Brian Williams is apologizing for allegedly fabricating a story about his experience during the 2003 invasion of Iraq.

Williams claimed he was on a helicopter that was hit and forced down by rocket propelled grenade fire during the Iraqi invasion.

But crew members from the stricken aircraft say that wasn't the case.

During an on-air apology Williams said the following:

"I made a mistake in recalling the events of 12 years ago. It did not take long to hear from some brave men and women in some air crews who were also in that desert. I want to apologize. I said I was traveling in an aircraft that was hit by RPG fire, I was instead in a following aircraft. We all landed after the ground fire incident and spent two harrowing nights in a sandstone in the Iraq desert. This was a bungled attempt to thank one special veteran and by extension our brave military men and women, veterans everywhere."

Crew members say Williams was not on the helicopter that was hit and say he arrived an hour later on another helicopter.

While some veterans say Williams' life was never in danger, the pilot of that chopper told CNN the aircraft did take some small arms fire.

Williams says he was not trying to steal anyone's valor.

He blames "the fog of memory over twelve years" and repeatedly watching video of himself inspecting the damaged aircraft for the mix up.

So is that a legitimate excuse?

A UT Psychology professor says we might want to give Williams more credit before we say he completely made up his story.

"It's easy to combine that stuff into a story that ultimately ends up making you feel you've actually experienced this kind of event. Because the details of it when they happen to people are often a little bit chaotic. So I don't think it's 100% certain that he made up this story and stuck with it. I think it's important to point that out," said Art Markman.

Markman goes on to say many people embellish stories that happened to them or stretch the truth.

He says retelling a story like this one can also make it take on a life of its own.