AUSTIN, Texas - Engineers and scientists at The University of Texas at Austin have created an enzyme that breaks down environmentally harmful plastics in a matter of hours to days, the university announced Wednesday, April 27. These plastics normally take centuries to degrade.

400 million tons of plastic waste is produced each year, according to the United Nations Environment Programme (UNEP). 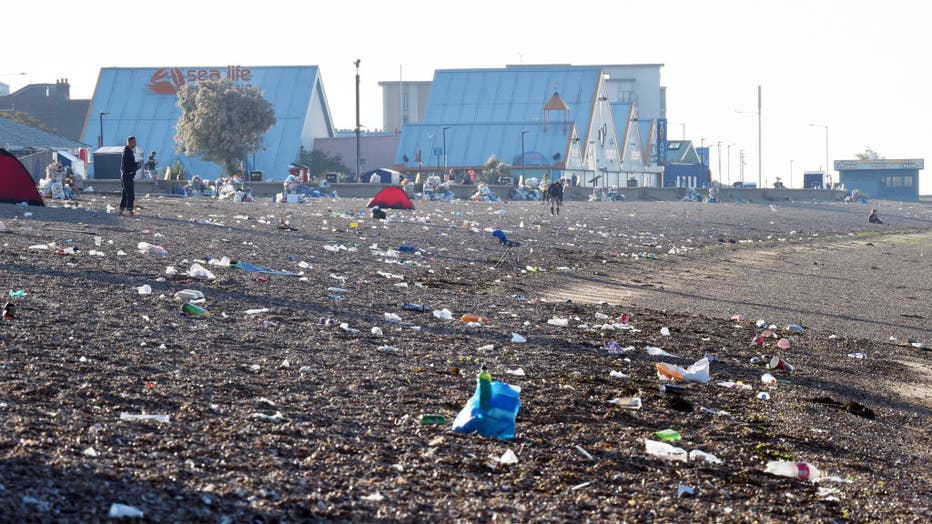 Litter strewn all over Southend's beaches after thousands descended on Southend on Sea in Essex as temperatures soared to 28 ¡C in what was the hottest day in 2021 amid the COVID-19 coronavirus pandemic. June 2021. (Photo by: Rob Welham/Universal His

UNEP says that if historic growth trends continue, the global production of primary plastic is expected to reach 1,100 million tons by 2050. Less than 10 percent of the seven billion tons of globally generated plastic waste has been recycled.

An estimated 75 to 199 million tons of plastic waste is currently found in our oceans, says UNEP. This waste enters aquatic ecosystems from the world's rivers, which directly connect with lakes and oceans. The amount of plastic waste entering oceans per year could nearly triple by 2040 unless changes occur to how plastic is produced, used and disposed.

UT's enzyme has the potential to aid in this global and pressing issue.

The university says it has the possibility to allow major industries to reduce their impact on the environment by recovering and reusing plastics at the molecular level.

Polyethylene terephthalate (PET) is a significant polymer making up 12% of all global waste. UT's enzyme project focuses on PET, as it is commonly found in cookie containers, soda bottles, fruit and salad packaging, and more.

According to the university, the enzyme was able to complete a "circular process" consisting of breaking down the plastic into smaller parts, and then chemically putting it back together. These plastics can be fully broken down within 24 hours in some cases.

UT says researchers at the Cockrell School of Engineering and College of Natural Science used a machine learning model to generate novel mutations to a natural enzyme called PETase, which allows bacteria to degrade PET plastics. Which mutations in these enzymes that would accomplish the goal of quickly depolymerizing post-consumer plastic waste at low temperatures is predicted by the machine.

Researchers were able to prove the effectiveness of the enzyme, which they are calling FAST-PETase, (functional, active, stable and tolerant PETase), after studying over 50 different post-consumer plastic containers, polyester fibers and fabrics as well as water bottles all made from PET.

The enzyme can perform the recycling process at less than 50 degrees Celsius, according to the university. It's capability to operate efficiently at low temperatures makes it portable and affordable for large industries.

UT says the next steps for the team is to scale up the enzyme for industrial and environmental application. A patent application for the technology has been filed by the researchers. The team is exploring several possibilities for this technology, including cleaning up landfills and polluted areas.