There is a growing memorial outside the Scott Stadium with flowers, bears and notes for Lavel Davis Jr., Devin Chandler and D'Sean Perry. FOX 5's Nana-Sentuo Bonsu spoke to University of Virginia students who are mourning the deaths of the three UVA football players.

CHARLOTTESVILLE, Va. - There is a growing memorial outside the Scott Stadium with flowers, bears and notes for Lavel Davis Jr., Devin Chandler and D'Sean Perry.

The three University of Virginia football players were shot and killed Sunday evening.

Outside on the South Lawn, the student body gathered to grieve and start the healing process.

"It was a powerful demonstration. I think it shows the spirit of UVA," said Mahlet Nebiyu, a freshman at the university. 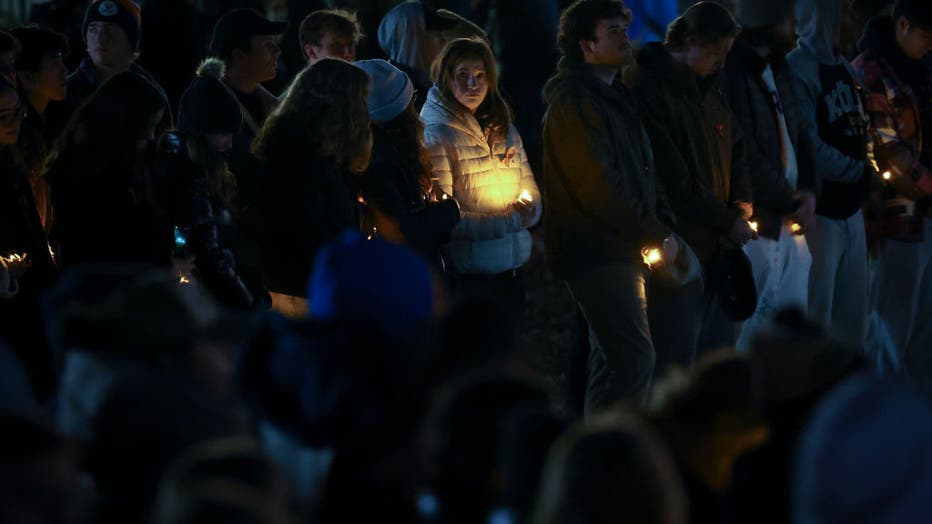 CHARLOTTESVILLE, VIRGINIA - NOVEMBER 14: Members of the University of Virginia community attend a candlelight vigil on the South Lawn for the victims of a shooting overnight at the university, on November 14, 2022 in Charlottesville, Virginia. Christ

"To see everybody come together and hold their lights up for the three students who passed away. It meant a lot," another student added.

"It's surreal to think that you're here in one hour and gone the next," said a student at the memorial on campus.

Students say they are still trying to process what happened and they're left asking "why?"

Why did someone take the lives of Devin, Lavel and D'Sean?

He tells us he had a relationship with Lavel Davis who was a junior from South Carolina.

"He's a quiet soul, and it's only those that he opens up to where you really get to see the depths of who he is. And I was fortunate to be one of those people that Lavel shared the other side with," Moore said.

"He had ambitions of someday hoping to go to the NFL. He wanted to go out with a shiny note at UVA as a star wide receiver and lead the nation," Moore said.

The gathering on the South Lawn was supposed to be a silent candlelight but there was a moving prayer at the steps that were lit with candles.

A community prayer service was held for University of Virginia students mourning the deaths of the three football players.

"All students are invited for a short service followed by refreshments and fellowship," the invitation reads. 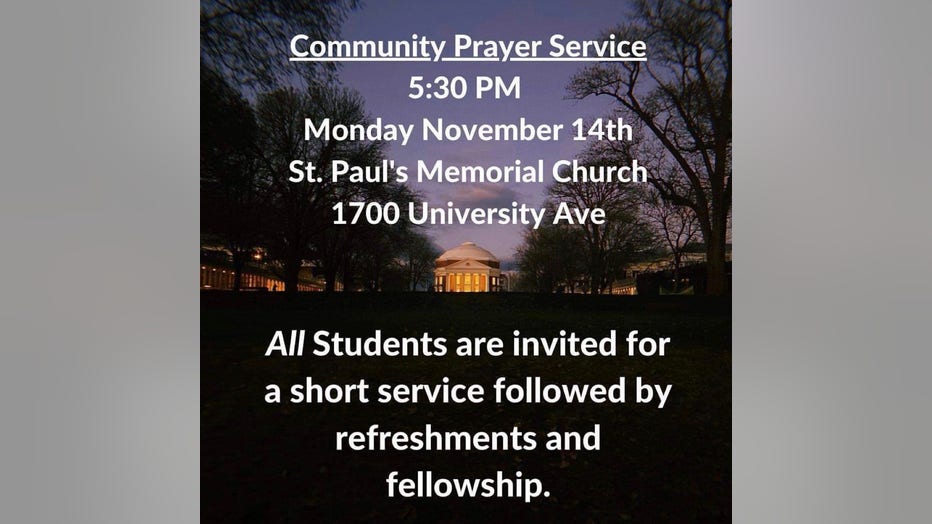 Students told FOX 5 there were multiple vigils planned throughout campus for the victims, and the university said it is putting together one as well.

University President Jim Ryan identified the three students shot and killed as Lavel Davis Jr., Devin Chandler, and D'Sean Perry. All three were members of the UVA football team. Two other students were wounded and were taken to the UVA Medical Center. One of the injured students is in good condition and the other is in critical condition.

The suspect was apprehended Monday afternoon and is currently in police custody.

Prayers, heartfelt sentiments, and remembrances have come from all over the country after the incident.

"I cannot find the words to express the devastation and heartache that our team is feeling today after the tragic events last night that resulted in the deaths of Lavel, D'Sean and Devin, and the others who were injured," Virginia head football coach Tony Elliott tweeted. These were incredible young men with huge aspirations and extremely bright futures. Our hearts ache for their families, their classmates and their friends."

"As a mother of three children, I ache for the parents and family members," said Virginia Athletics Director Carla Williams in a statement. We lost three talented and bright young men. We will never see what their impact on the world would have been, but we will never forge their impact on us. I miss Lavel, D'Sean and Devi. I pray for their peace, comfort, and hope for their parents and loved ones. For their teammates, coaches, and friends, I pray for strength and a peace that surpasses all understanding."

"We had a horrific tragedy overnight at UVA, lives were lost and families changed forever. Due to the diligence and commitment of our law enforcement, the suspect is in custody. While there are still many details to uncover, let us lift up the entire community in prayer," tweeted Virginia Governor Glenn Youngkin.

"Too many families across America are bearing the awful burden of gun violence," the statement said. "Earlier this year, President Biden signed the most significant gun safety law in nearly three decades, in addition to taking other historic actions. But we must do more. We need to enact an assault weapons ban to get weapons of war off America’s streets. House Democrats acted, and the Senate should follow."

"The Office of the Attorney General is working with federal and state law enforcement and they are actively investigating the case. We will provide more information at the appropriate time," he tweeted.

A UVA professor Tweeted that both Devin Chandler and Lavel Davis were his students. He shared heartfelt sentiments about having them in his class.

"Devin was in my class in spring 2022, and Lavel is in my class this semester. I am so indescribably sad right now but I wanted to share a few memories of them, because they were wonderful people," said Jack Hamilton, an American studies and media studies professor.