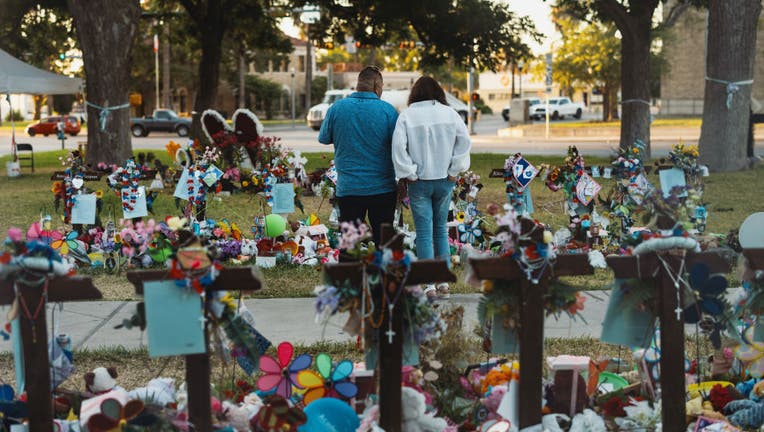 UVALDE, TX - JUNE 25: A couple from the nearby town of Del Rio, TX pays their respects at a memorial for the victims of the mass shooting at Robb Elementary School on June 25, 2022 in Uvalde, Texas. The Uvalde community is marking one month since the

**NOTE** The original headline to this story was shortened for length.

After leaked surveillance of law enforcement responding to the Uvalde shooting was published earlier this week, angry snap judgments and criticisms of individual officers flooded the internet.

Media organizations and social media users were up in arms over an image pulled from the video posted by the Austin American-Statesman and KVUE-TV that showed a policeman glancing at his phone as the shooter, in two adjoining classrooms just down the hall, was killing children and teachers with a semiautomatic rifle.

"This really makes my blood boil," Terrance Carroll, a former speaker of the Colorado House of Representatives, wrote in a tweet. "This officer is checking his phone while kids & teachers are literally dying a few doors down."

Video from inside Uvalde's Robb elementary school obtained by the Austin American Statesman shows law enforcement waited more than an hour to confront a gunman.

Some observers homed in on the officer’s phone background which depicted the logo for the Punisher, a Marvel Comics vigilante antihero — using it as fodder to cast aspersions.

"That cop in Uvalde having his lock screen be the punisher logo and him being scared to take on an active shooter is truly the perfect encapsulation of how cops see themselves vs who they really are," said Albert Jaragua Corado, a podcast host in Los Angeles.

But to Uvalde residents and officials investigating the shooting, the footage showed something else. The officer depicted is Ruben Ruiz, whose wife, Eva Mireles, lay dying inside one of the classrooms with the gunman.

RELATED: Video from inside Uvalde school shows officers milling around hallway during massacre

Mireles told Ruiz in a phone call that she had been shot. Ruiz, standing in the hallway with his pistol drawn, was unable to get to her. Other officers ultimately escorted Ruiz from the scene and took his gun. Mireles was alive when police transported her from the classroom, but she died before reaching the hospital.

The online criticism of Ruiz prompted a member of the Texas House of Representatives committee investigating the shooting to speak out. Rep. Joe Moody, D-El Paso, said he had not planned to make any public comments until the committee’s report is finished, but felt he needed to set the record straight about Ruiz.

"I couldn’t say nothing seeing this man, who’s lost everything, maligned as if he was indifferent or actively malicious," Moody said on Twitter. "Context matters. To those who haven’t bothered to read even the news that’s been reported in your rush to judgment, he attempted to engage but was removed from the building and disarmed. We’ll have much to say about the police response, but no criticism of this officer."

The release of the video came days before the House committee planned to show it privately to Uvalde victims’ families before making it public. Its publication Tuesday evening disappointed some officials, including Department of Public Safety Commissioner Steve McCraw and Uvalde Mayor Don McLaughlin.

Though the events of the video had already been described for the public — first by The Texas Tribune on June 20 and then by McCraw during testimony to a Senate committee the following day — the sight of officers dawdling in the hallway for more than an hour before engaging the shooter shocked many viewers.

The footage underscored how inaccurate Gov. Greg Abbott’s initial account of the police response was. At a news conference the day after the shooting, he said the death toll would have been worse if not for the quick response of officers, who "showed amazing courage by running toward gunfire for the singular purpose of trying to save lives."

The trickle of leaks in the seven weeks since the massacre, as government agencies have refused to release information through official channels, have painted a far different picture of law enforcement conduct that day. The surprise release of the hallway surveillance video on Tuesday reached an audience already bracing for evidence of profound police incompetence.

A second portion of the hallway surveillance video also drew widespread criticism. It shows, nearly an hour after the shooting began, an officer wearing body armor over street clothes using a hand sanitizer dispenser in the hallway. It, too, became an example of police indifference to dying children, and even became the subject of an essay in Slate.

But sources involved in the shooting investigations, who are not law enforcement, said there is more to the story. One identified the officer as a Uvalde County Sheriff’s Office deputy who had been asked by the Border Patrol tactical unit on scene to prepare to help triage victims. Other officers put on gloves and begin to stage medical equipment in the hallway.

Twenty-one minutes later, Border Patrol agents lead a team into the classrooms and kill the gunman. Footage from the hallway camera not published by Statesman but reviewed by The Texas Tribune shows officers removing children from the classrooms immediately afterwards.