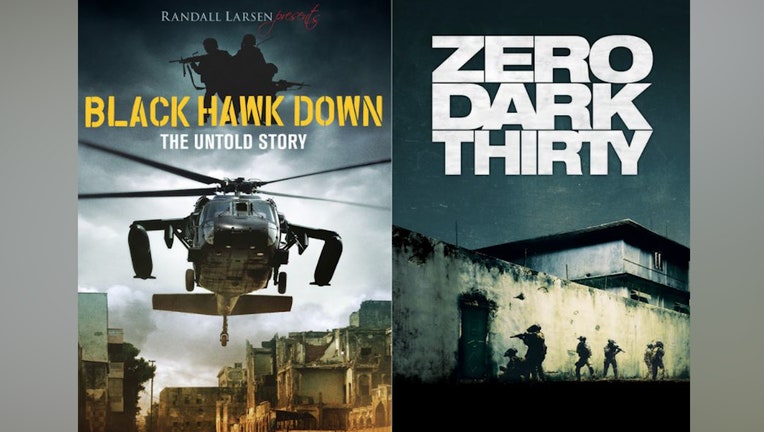 The collection features 11 films starring some of the most acclaimed talent in Hollywood and 11 documentaries highlighting true stories of the nation’s heroes.Here are the free titles available to watch:

“A gripping thriller about the risks taken by secret military workers to defeat Osama bin Laden, including the daring work of a U.S. operative.

“During the battle of Stalingrad in 1942, a legendary Russian sniper and his German counterpart play a game of cat and mouse as the city burns.“

“After returning from a tour in Iraq, a U.S. Army officer is assigned to work in the Casualty Notification Service, where he feels drawn to a widow.“

“The Lafayette Escadrille was a unit of American men who volunteered to fight for France before the U.S. entered World War I. This is their story.“

To End All Wars (2004) – Kiefer Sutherland, Robert Carlyle and more

“Based on real events during WWII, this is the story of four Allied POWs who are forced to build a railroad through the Burmese jungle.“

“As WWII winds down, a group of US soldiers is assigned to monitor activity amidst the stark, snow-covered landscape of the French-German border.“

“Stranded in Canada, a German WW2 U-boat crew with a fanatical Nazi captain aims to avoid capture by reaching the border to enter the still-neutral US.“

“Set during the 1937 Japanese invasion of Nanking, an American taking refuge in a church attempts to save a group of women from marauding soldiers.“

“At the height of Hitler's notorious U-boat war, the crew of the U.S.S. Swordfish is taken prisoner in a battle with a German submarine. However, meningitis strikes more than half of the German crew, and there aren't enough Germans to run the submarine. Avoidingboth the contagion- and POW protocol- crew members and prisoners alike must work together to survive. But it isn't until a U.S. carrier locates the ship that the men aboard the U-boat are put to the ultimate test of will and survival.“

“Racial tensions and social intolerance erupt between four soldiers waiting to be shipped to Vietnam after one of them comes out as a gay man.“

RELATED: Bust a move! ‘The Masked Dancer’ coming to FOX in December

“The story of Pat Tillman, who walked away from a multi-million-dollar NFL deal to join the Army and was killed at 27 in Afghanistan by friendly fire.“

“An eye-opening look at the heroic World War II aviation pioneers who were the first African American pilots of the U.S. Army Air Force.“

“Embedded photojournalist Danfung Dennis reveals the devastating impact a Taliban bullet has on the life of 25-year-old Sergeant Nathan Harris.“

“Experience the personal cost of war through the eyes of an Army chaplain and members of a U.S. battalion deployed in Afghanistan in 2011 and 2011.“

“Experience this groundbreaking film, the story of the greatest sea disaster in U.S. Navy History, told for the first time by only the men who lived it.

In the most top secret Navy mission of World War II, the crew of the heavy cruiser USS Indianapolis delivers components of the atomic bomb to Tinian island. Four days later, two Japanese torpedoes sink the ship in the Challenger Deep, triggering an epic tale of survival.

For five days, the 880 men who make it into the water battle searing sun, thirst, hundreds of sharks and ultimately each other. Just 317 survive only to band together again in a fifty-year fight to clear their captain's name.

Set to a soaring original score, this incredible story unfolds with rare WWII footage, previously unpublished photographs, and new footage from one of the last WWII-era heavy cruisers still afloat. USS Indianapolis: The Legacy shows us that through courage and faith, ordinary men can survive the crucible of nature, and emerge extraordinary heroes.”

“A father and son journalist duo’s war footage shows a harrowing 9-day battle in a hostile Afghanistan valley where no foreign troops had ever fought.”

“The harrowing 1993 rescue of U.S. soldiers shot down inside Black Hawk helicopters in Somalia, leading to the heaviest combat since the Vietnam War.”

“A gentle hero from the northern ice travels to New York City to warn world leaders about the catastrophic effects of global warming.”

“Filmmaker Darrin Dick uncovers the tale of his Korean War veteran grandfather and finds bravery, loss, and faith amidst the extremities of war.”

“The toll of three tours in Iraq affects the quiet farm life of a military man in the wake of family losses and his yearning to be a better soldier.”

“The fascinating insights and personal history of Native American war heroes who helped by talking in code for the U.S. military during World War II.”

Tubi, a division of FOX Entertainment, is the world’s largest ad-supported video on demand service with over 20,000 movies and television shows from nearly every major Hollywood studio.

To start streaming, download the Tubi app on your mobile devices or head over to https://tubitv.com/home.