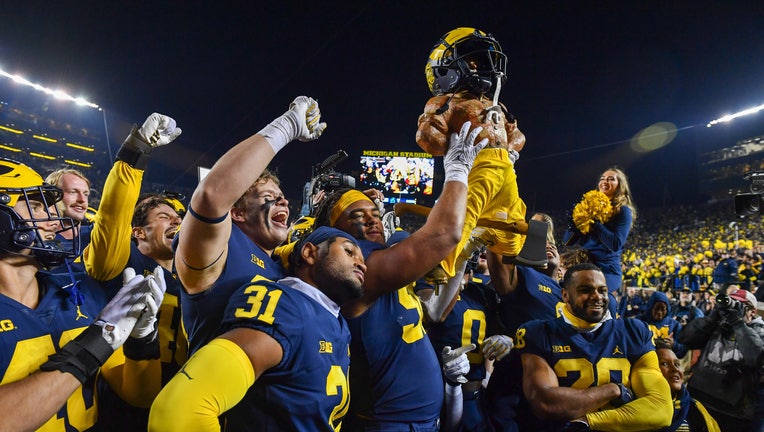 Mike Morris #90 and other players of the Michigan Wolverines celebrate with the Paul Bunyan trophy after winning a college football game against the Michigan State Spartans at Michigan Stadium on October 29, 2022 in Ann Arbor, Michigan. The Michigan

ANN ARBOR, Mich. - Saturday's ugly battle between Michigan and Michigan State ended with a Wolverines win but it's what happened in the tunnel after the game that is getting more attention as video shows a group of Spartans surrounding a Wolverine player in the tunnel and shoving and pushing him.

Detroit News reporter Matt Charboneau was one of several reporters in the tunnel after the game as both teams returned to the locker room Saturday night. Charboneau captured video that showed a single Michigan player surrounded by Michigan State University players. The player appears to be sophomore defensive back Ja’Den McBurrows, who wears number 1.

After the beating, UM head coach Jim Harbaugh said that Athletic Director Warde Manuel will deal with the authorities regarding the "altercation" in the tunnel, but says that one player may possibly have suffered a broken nose. 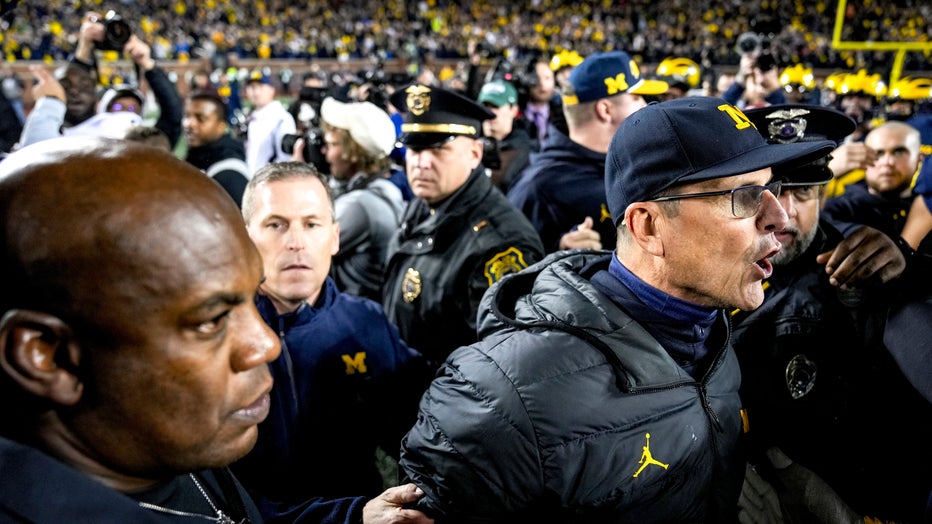 Manuel says the police and the Big Ten Conference are looking into the altercation, adding it is, "Completely and utterly" unacceptable.

On Sunday, MSU Head Coach Mel Tucker tweeted that the team's emotions were high but there is no excuse for behavior like this.

"As Spartans our program has a responsibility to uphold the highest level of sportsmanship. While emotions were very high at the conclusion of our rivalry game at Michigan Stadium, there is no excuse for behavior that puts our team or our opponents at risk," Tucker said.

"I’m extremely saddened by this incident and the unacceptable behavior depicted by members of our football program. On behalf of Michigan State University, my heartfelt apology to the University of Michigan and the student athletes who were injured. There is no provocation that could justify the behavior we are seeing on the videos. Rivalries can be intense but should never be violent."

Stanley said Tucker would be holding the players involved responsible and that the university if cooperating with any investigation by law enforcement and the Big Ten Conference."

This is the second scuffle of the month after a Michigan game in Ann Arbor. When Michigan beat Penn State, the two teams got into a fight in the tunnel. Harbaugh has said that Penn State head coach James Franklin was the aggressor.