Lakeway couple says they've been targeted due to their politics

The political divide here in Texas feels like it's deeper than ever with discourse about candidates and issues often devolving into threats or worse.

LAKEWAY, Texas - A couple in Lakeway says they have been targeted in a very personal way because of their political beliefs. They recently got an anonymous letter in the mail they call an attempt at voter intimidation.

"It’s an isolated incident on one hand, but on the other hand, it’s hate," said Andrew.

We sat down with Andrew and Olivia at Lakeway City Park. FOX 7 isn’t using their real names, or showing their faces or homes, because of their concerns about retaliation.

"Once I found out it only came to us, it was disturbing," said Andrew.

The page-long tirade begins by saying: "Thanks for showing your support for Beto O’Rourke", which they believe is a reference to the Beto campaign signs they have on their lawn.

"I should feel safe having that sign in my yard," said Olivia.

The letter goes on to dub them an "enemy of the state of Texas", calling them "Socialists" and suggesting they support killing unborn babies and young people dying of overdoses.

The letter then takes an even darker turn, saying: "We also now know that you don’t believe in the Second Amendment and don’t have a gun to protect yourself and your family so you will not be able to protect yourselves. Don’t worry, there are lots of your neighbors that do believe in the Second Amendment and will decide if they want to help you or not if there is an issue…" 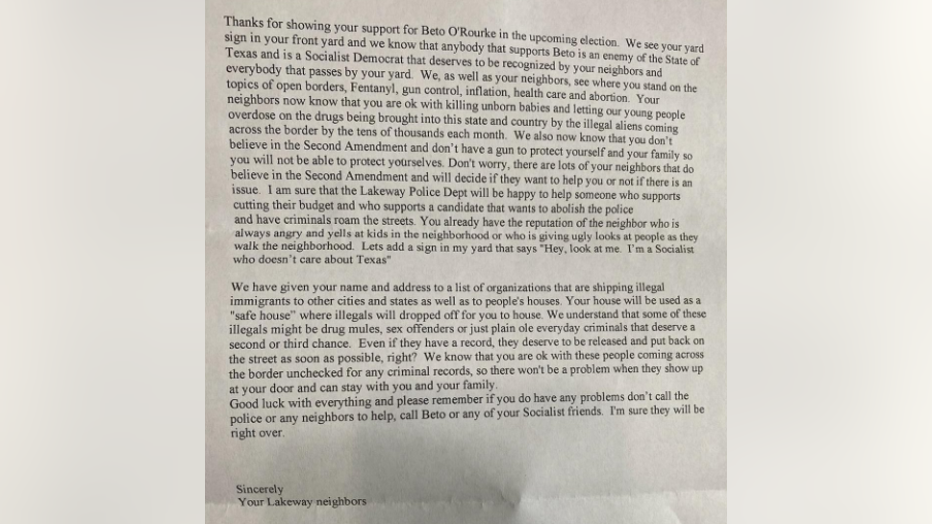 A Lakeway couple said they believe they are victims of voter intimidation after they got a threatening letter in the mail.

Olivia says that feels like a threat to her.

"People said it wasn’t a direct threat. The indirect threat, the underlying point of that, that’s there. That’s there in that letter," she said.

The letter goes on to say: "I am sure that the Lakeway Police Department will be happy to help someone who supports cutting their budget and who supports a candidate that wants to abolish the police and have criminals roam the streets."

The author of the letter then claims: "We have given your name and address to a list of organizations that are shipping illegal immigrants...to people's houses. Your house will be used as a 'safe house' where illegals will be dropped off for you to house. Some...might be drug mules or sex offenders."

"I feel that they’re trying to scare us away, and to leave," said Olivia.

At the bottom, it's simply signed "your Lakeway neighbors", but Andrew and Olivia don't believe it's from anyone they know personally.

"We talk to our neighbors who have different political beliefs all the time. It’s never an issue. But for this person it became an issue," said Andrew.

"The question of whether this is an example of voter intimidation is an interesting one," said Dr. Eddy Carder, a constitutional law professor at Prairie View A&M.

Carder says while this action may not legally qualify as intimidation because it happened away from a polling place.

Andrew and Olivia have lived in Lakeway for the last 20 years, and they say they have had things happen to them in years past, like campaign signs being ripped off their front lawn, but never anything quite like this.

"I’m not going to say fear, because I don’t want fear to take over. But I’m alert," said Olivia.

They say they’ve installed security cameras at home, but the idea of taking their signs down never crossed their mind.

"Not once," said Olivia. 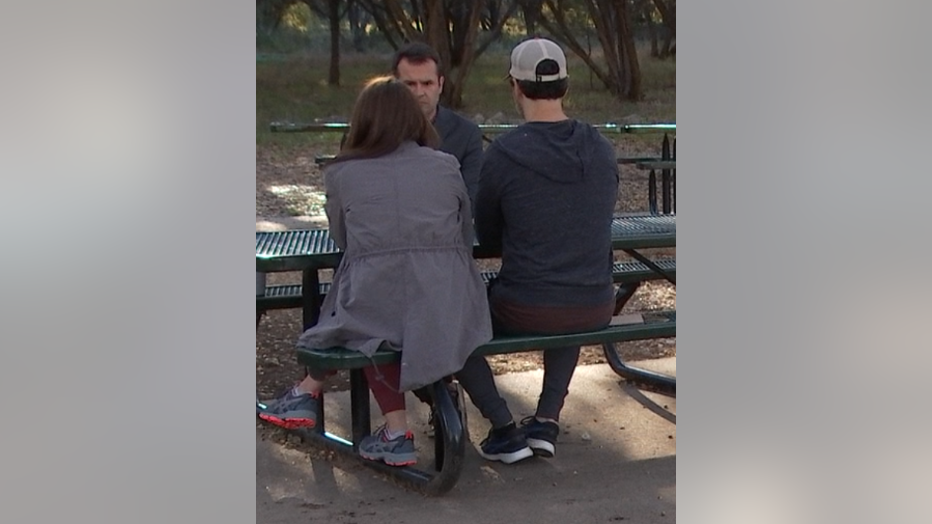 A couple in Lakeway says they have been targeted in a very personal way because of their political beliefs.

I asked if they would feel the same way if something like this happened to a supporter of Gov. Greg Abbott.

"Absolutely. 100 percent. This is not a political party issue by any means. This is an issue of people feeling that it’s okay to spew negativity and fear," said Olivia.

FOX 7 asked what they would say to the person who wrote the letter. Olivia said, "Come talk to me." Andrew replied, "Introduce yourself. You may like us, you may not like us. But at least have a conversation."

Andrew and Olivia say both parties need to do more to denounce this kind of rhetoric.

If you’re on the receiving end of something like this, Carder suggests you take it seriously. You can reach out to the Texas Civil Rights Project which advocates for voters. Also, the Texas Secretary of State’s office has an election protection hotline you can call.

You can also report it to your local police. Even if it’s not a crime, Carder says it’s a good idea to have it on the record, in case it escalates into something else.