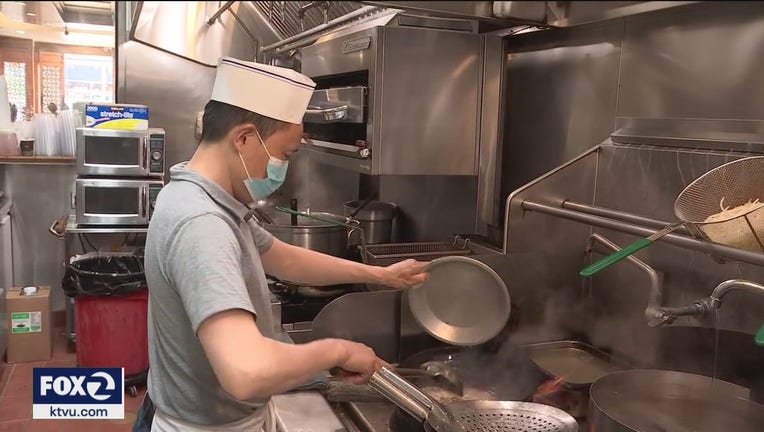 Workers at two Wonderful restaurants in San Mateo County were vaccinated against COVID-19 after restaurant owner You You Xue made appointments for the staff on Feb. 25, 2021.

SAN FRANCISCO - Like many Bay Area workers, Luiz Morales, a cook at a San Francisco restaurant and an immigrant from El Salvador, has had her hours cut during the pandemic.

A lingering, severe shoulder injury makes the physical work painful at times, but she’s thankful to have 15 hours a week of work. The two months when her restaurant laid her off were arduous, and made more difficult by the fact that she didn’t qualify for unemployment.

Her job looks different now than it used to be: she’s not only prepping food, but also cleaning and dishwashing. And to make ends meet, she picks up cans around her San Francisco neighborhood in the evening.

Across the Bay Area, people who were living comfortably with jobs in the service sector have had their careers and livelihoods completely upended during the pandemic.

They make up a significant part of the country’s labor force that is facing the exact same anguish—losing jobs and losing hours they need to survive. Yet, a cursory look at wage data in the country for 2020 may seem to be cause for celebration: wages grew a historic amount.

A closer look at the data paints a picture of stark inequality and of the "K-shaped recovery", splitting the economy between higher-wage workers, largely insulated from financial disaster, and middle-class and lower-income workers, whose careers and lives face instability and an uncertain future.

The average wage grew so much, and so fast, because millions of the lowest paid workers lost their jobs.

A report analyzing the data, from the Economic Policy Institute, provides insight into a labor market with growing inequality among the highest and lowest paid workers, at a time of high union support and low union membership.

"All of the job losses are happening in the bottom half of the wage distribution," said Elise Gould, senior economist at the Economic Policy Institute and co-author of the paper examining this phenomenon. "And the top half is actually seeing some wage gains."

Workers with unlivable incomes like Morales’ are far from alone, and they’re the ones, in large part, who are losing jobs across the Bay and the country during the pandemic.

Women, particularly Black and Hispanic women, have lost their jobs in greater numbers than anyone else, Gould said.

And beyond the scope of jobs lost due to struggling business, many women have also been pushed out of the labor force because "they have to take care of children whose school has closed, or daycare centers have closed" or for elderly relatives or parents.

Maria Moreno, a community organizer at the Bay Area Restaurant Opportunity Center, said that many local service workers have been close to the "brink" as they’ve lost jobs and hours, and also managed exposure to coronavirus in their workplaces and homes.

When the average cost of a one-bedroom apartment in San Francisco or Berkeley is unaffordable to even middle-income earners, shared living spaces and multi-generational homes house many of the Bay Area’s lower-wage workers.

Moreno said many workers she’s spoken to have had to negotiate payment plans with their landlords—something they’ve never previously done before the pandemic.

"So many don't have contingency plans," she said of workers who have been working in the service industry for decades.

But she’s met a few workers who, when confronted with the reality that their industry has been eviscerated, made plans to return to school, or in rare cases, start their own businesses.

Some workers have gotten contract work in construction. Others have taken shifts in grocery stores, she said.

Whether they will be able to return to their field, while meeting the cost of living in the Bay Area, is uncertain.

"This is their career," Moreno said. "This is their craft. So not having access to it, or having very limited options of, where to go has left them kind of stuck."

Lina Hernandez, an Oakland public library employee and a hotel concierge, said that she also feels stuck; her positions at the library and at the hotel have been in flux, and neither job has recuperated full hours.

She has been working some hours at the library, and was able to get a small amount of unemployment funds. But that money does not begin to cover the sum losses of income from her work.

"Personally, my finances kind of took a hit," said Hernandez, who lives with her spouse, who is also a city employee, and their two-year old daughter. "I was able to use some of the credit card programs for COVID, but then those all expired pretty quickly."

Hernandez said that after closing multiple credit card accounts, her credit score went down, even though she’s still paying down those balances.

She is far from alone in her use of credit to make ends meet without sufficient income.

She said that she has become vigilant about which household appliances use high levels of electricity, and sometimes rotates which appliances she unplugs to save money.

"And we had to just step out into our backyard or something to stop having to use so much electricity because we were watching the bills creep up," she said.

On top of that, she doesn’t get healthcare from either job, and the health insurance stipend she gets from the city of Oakland does not cover the cost of insurance on the state healthcare exchange.

People in California who don’t qualify for Medi-Cal, because their income is slightly above the poverty threshold, can end up paying over $200 a month for the cheapest and least comprehensive healthcare on the Covered California market.

Hernandez is a member of the Service Employees International Union Local 1021, a Northern California service worker’s union, which she said lost 700 to 800 part-time city workers who couldn’t pay dues without any income.

"There are 700 to 800 city workers who are not currently working, because the city says they don't have the money for them," Hernandez said.

"And it's like, well, you didn't have the money for them before. But you were forcing them to cobble together a way to live in the Bay Area by giving them few hours, low pay and not giving them benefits."

While companies, including Uber or Lyft, characterize contract work as enabling flexibility and freedom, workers like Hernandez say they’d take full time work if they could get it.

Union advocates point to the Protecting the Right to Organize (PRO) Act as a potentially transformative reform to the existing labor market in the U.S. The act would make it easier for workers to form unions, and for the unions to be stronger once they exist.

A fact sheet from the U.S. Education and Labor Committee about the PRO Act says that the act could help protect against further "erosion of America’s middle-class."

Hernandez says that she believes the city’s reliance on temporary, part-time workers "to make up for the places where they want to be able to cut costs" is leaving city employees like her, and workers who have been with the city for 15 or 20 years, in an impossible spot.

"If the full time jobs were there and available from the city, I would love to have more opportunities to find full time work," she said.

"For many of us, temporary part time work, works with our schedules, works with our childcare needs, works with if we have elderly parents that we might be taking care of, or if we're in school, trying to get a degree to get those better full time jobs."

Caroline Hart is a writer and producer with KTVU. She covers unemployment, inequality, food issues, breaking news, and much more. She can be reached at caroline.hart@foxtv.com.