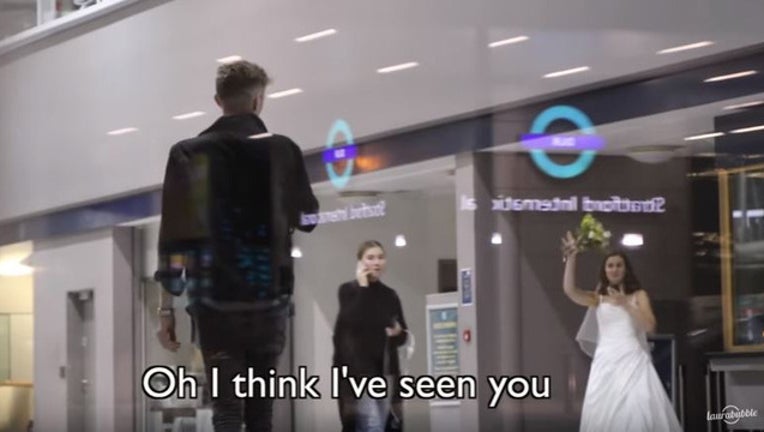 (FOX 13) - A British comedian and vlogger took her Tinder dates to the next level on the very first date by wearing a wedding dress, and the results were hysterical.

After buying the wedding dress on eBay, the vlogger, who goes by the online name "Laura Bubble," showed up to the dates dressed in the gown complete with a veil and a bouquet.

To complete the prank, she had someone record their reactions with a hidden camera.

Another date made a phone call while Bubble stepped away from the table and a hidden microphone captured his conversation. "I've got a beer, I've ordered a beer, should I just go?" he asks the person on the other end of the phone. Then, he makes a run for it.

Each date is perplexed as they make eye contact with Bubble wearing the wedding dress.

To make matters more uncomfortable, when the date continues, she talks about taking the relationship themselves to the next level. "So I was thinking I should add you on Facebook, and then we can, like, make it official," she tells the date.

She also pretends not to understand what makes any of the dates uncomfortable about her attire. "Oh, you mean my hair, I got it done the other day, thank you," she responds.

In the end, she let the dates who stuck around in on the joke, which was received with both thankful laughter and relief.

The prank video was created as a fundraiser for Stand Up to Cancer. No second dates came out of the prank, but that's OK, she said. That wasn't the goal.

Overall, the 1,000 hour fundraising campaign with YouTube vloggers across the UK, including Bubble, helped raise more than $229,000.