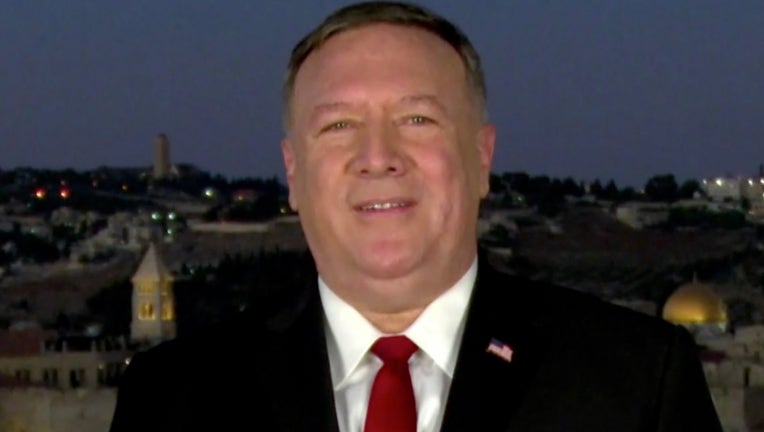 CHARLOTTE, NC - AUGUST 25: In this screenshot from the RNC’s livestream of the 2020 Republican National Convention, U.S. Secretary of State Mike Pompeo addresses the virtual convention in a pre-recorded video from Jerusalem, Israel, on August 25, 202

Chad Wolf, the acting secretary of the Department of Homeland Security, violated the law when he appeared during a taped naturalization ceremony on White House grounds with President Donald Trump, the group Citizens for Responsibility and Ethics in Washington, or CREW, wrote in a complaint filed Thursday.

On Wednesday, two law school professors filed a separate complaint against Secretary of State Mike Pompeo, arguing he committed an “egregious violation” by delivering a video-taped speech from Israel.

The Trump White House has taken an ambivalent approach to the ethics rules and norms that guided past administrations. And Wolf and Pompeo now join a substantive list of other Trump officials who have taken a cavalier approach specifically toward the Hatch Act.

White House chief of staff Mark Meadows dismissed concern about such violations on Wednesday, telling Politico, “Nobody outside of the Beltway really cares.”

Past secretaries of state have gone to lengths to avoid the appearance of partisan political activity, particularly during nominating conventions for the administrations they served.

Pompeo’s speech shattered that precedent and even went against the guidance he issued to American diplomats last month, advising that federal law prevented them from taking overt sides in the presidential campaign.

It was filmed during a diplomatic mission, using Old Jerusalem as a backdrop. In it, he praised Trump’s foreign policy and also celebrated the relocation of the U.S. embassy from Tel Aviv to Jerusalem, an issue of particular importance to white evangelicals who are a crucial voting block for Trump.

“This video is an egregious violation of the Hatch Act,” wrote Claire O. Finkelstein and Richard W. Painter, the two law school professors. “Secretary Pompeo at the same time as he was on a diplomatic mission to Israel gave a partisan political speech for an RNC campaign video in which he referred to the U.S. embassy in Israel, said that a candidate in a partisan election — Donald Trump — should get credit for the relocation of that embassy.”

Wolf, meanwhile, participated in a naturalization ceremony with five newly minted citizens on White House grounds. He stood before a podium, made introductory remarks and administered the oath of allegiance. Trump also appeared at the ceremony, spoke for several minutes and handed out certificates.

"By participating in this event that mixed official government business with support of a political party and a candidate for partisan political office, Mr. Wolf appears to have used his official authority or influence for the purpose of interfering with or affecting the result of an election," Noah Bookbinder, CREW's executive director, wrote in the complaint to the Office of Special Counsel. “His participation in ... this event constitutes political activity prohibited by law.”

They also called for a review of whether State Department employees who helped with logistics could have violated the Hatch Act, as well.

The penalty for violating the Hatch Act can include removal from federal service, debarment from federal employment for a period of under five years, suspension, reprimand, or a civil penalty that cannot be greater than $1,000.