AUSTIN, Texas - Austin Water has announced that it has lifted the boil water notice that was put in place on February 17 for all of its customers. Customers no longer need to boil water used for drinking, cooking and, making ice.

Officials say with the notice lifted, people should flush household pipes, ice makers, water fountains, etc. prior to using for drinking or cooking. Flushing simply means letting the water run to ensure that there is fresh water flowing through your pipes. The following are the guidelines officials ask you to follow for flushing:

Some emergency mandatory water-use restrictions remain in place until further notice. Customers are not allowed to do the following:

Austin Water says a few isolated pockets of customers are still without water and that's mostly due to water main repairs. FOX 7 Austin's Tierra Neubaum has details on that and more information on the boil water notice.

Most Austinites now have running, drinkable water but there are still some who are experiencing issues. Austin Water says a few isolated pockets of customers are still without water and that's mostly due to water main repairs.

Officials say they've deployed more than 20 crews who are working all day to repair about 40 to 50 water main breaks per day. They say they have hundreds more to repair.

Many residents have drinkable water now, but there's growing frustration tonight in the community for some who have no idea what's coming out of their faucets.

However, some who live in the areas where the water has been deemed drinkable say they're not drinking it just yet because their water comes out oily and leaves behind a mysterious residue.

If you still need bottled water, the City of Austin is hosting another water distribution event starting at 9 a.m. Each car is limited to one case of water. You can see locations in the image below. 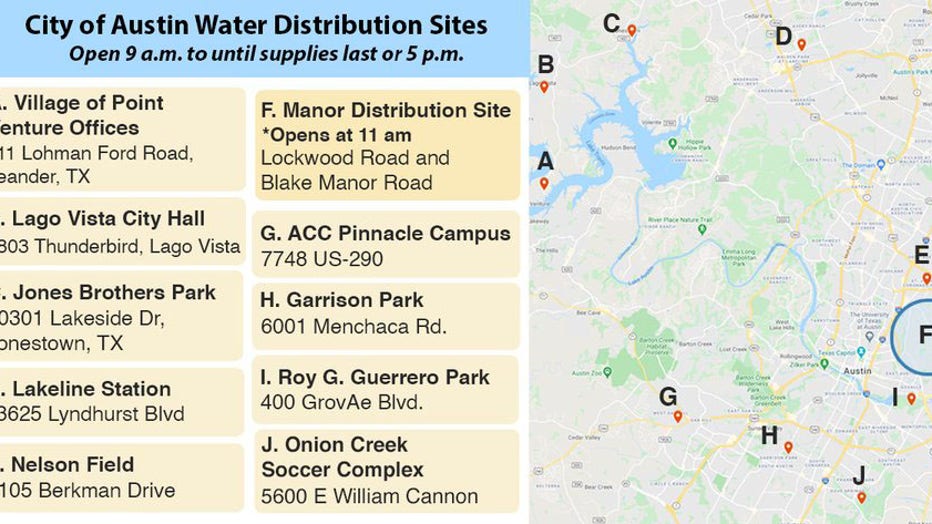