President Joe Biden said Wednesday he will withdraw the 2,500 remaining U.S. troops from Afghanistan before Sept. 11 of this year.

WASHINGTON - Ten years have gone by since the United States Special Forces conducted a raid that killed Osama bin Laden, the mastermind behind the Sept. 11, 2001,  terror attacks.

On Sunday, President Joe Biden marked the occasion by releasing a statement, reflecting on one of the biggest accomplishments of the Obama administration.

"Ten years ago, I joined President Obama and members of our national security team, crowded into the Situation Room to watch as our military delivered long-awaited justice to Osama bin Laden," said Biden, who was Obama’s vice president. "It is a moment I will never forget—the intelligence professionals who had painstakingly tracked him down; the clarity and conviction of President Obama in making the call; the courage and skill of our team on the ground." 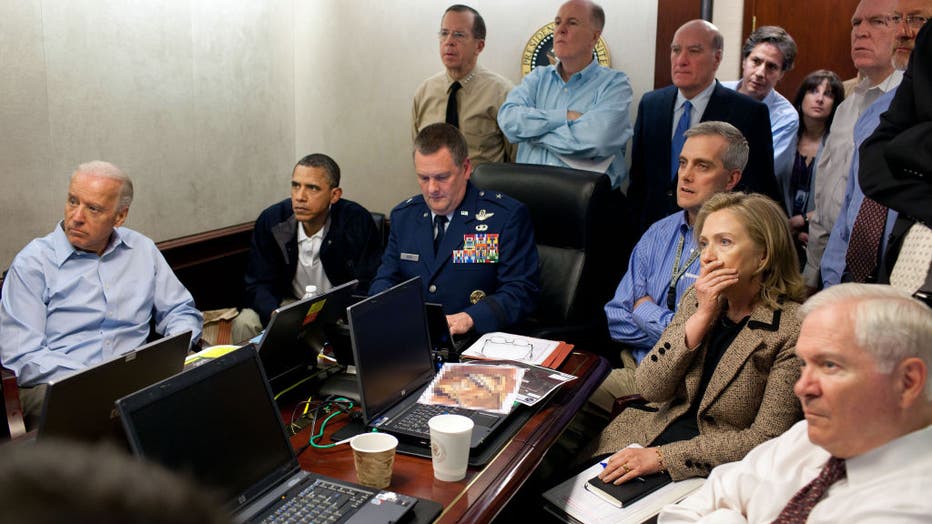 In this handout image provided by The White House, President Barack Obama, Vice President Joe Biden, Secretary of State Hillary Clinton and members of the national security team receive an update on the mission against Osama bin Laden in the Situatio

After 9/11, the United States invaded Afghanistan in pursuit of the terrorist organization al Quaeda. Nearly a decade later, on May 2, 2011, the military located bin Laden in a compound in Abbottabad, Pakistan.

"We followed bin Laden to the gates of hell — and we got him," Biden said. "We kept the promise to all those who lost loved ones on 9/11: that we would never forget those we had lost, and that the United States will never waver in our commitment to prevent another attack on our homeland and to keep the American people safe."

Since that time, America has greatly reduced the number of troops stationed in Afghanistan.

The Obama and Trump administrations talked about troop withdrawal strategies but neither of them accomplished the commitment Biden has made — to withdraw troops from Afghanistan before Sept. 11, 2021.

"Now, as a result of those efforts, as we bring to an end America’s longest war and draw down the last of our troops from Afghanistan, al Qaeda is greatly degraded there," Biden said. "But the United States will remain vigilant about the threat from terrorist groups that have metastasized around the world.

RELATED: Biden to leave troops in Afghanistan beyond May 1 deadline, sets 9/11 as new target, official says

"We will continue to monitor and disrupt any threat to us that emerges from Afghanistan. And we will work to counter terrorist threats to our homeland and our interests in cooperation with allies and partners around the world."

The Trump administration had negotiated a May 1 departure with the Taliban, but Biden didn't keep the commitment to that deadline -- pointing to tactical reasons.

Missing that agreed-upon deadline risked retaliation by the Taliban and to reignite the political division over America's involvement in what many considered an endless war.

But U.S. military commanders and defense officials have said that attacks on U.S. troops have largely paused, with the Taliban turning their ire to Afghans.

Biden, who often ends his public speeches asking for God’s blessing on American troops, concluded his statement by thanking the service members who conducted the raid 10 years ago.

"We will continue to honor all the brave women and men, our military, our intelligence and counterterrorism professionals, and so many others, who continue their extraordinary work to keep the American people safe today," he said. "They give their best to our country, and we owe them an incredible debt of gratitude.