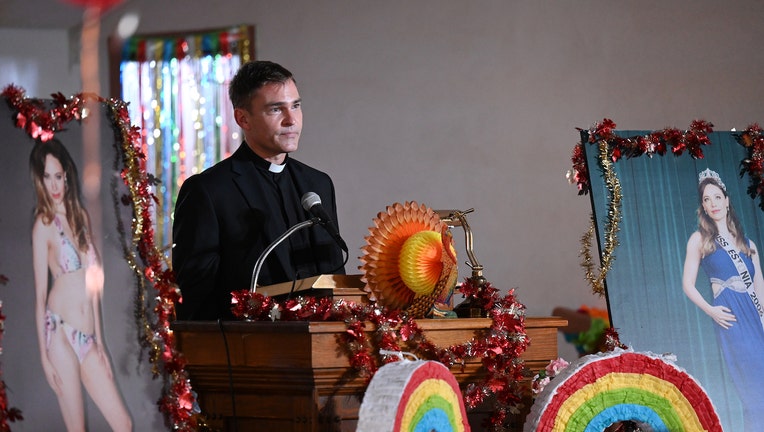 Chicago - Welcome back to "Welcome to Flatch" recaps! In this week’s episode, "RIP Cynthia," Kelly and Shrub volunteer at a senior computer class and the town gets a lesson on catfishing. Meanwhile, Mandy teaches Cheryl self-defense after she is attacked for her alliance with Pockton. Just starting the show? Here’s our recap of the premiere. Ready to binge? The first seven episodes are streaming on Hulu.

After last week’s slightly more plot-centric episode, "Welcome to Flatch" is back with the goofs this week. In fact, "RIP Cynthia" might be the silliest episode of "Welcome to Flatch" yet — and that’s a good thing. The show locks into a loopy sensibility that fits it well. For instance, small town slacker Shrub (Sam Straley) has a lengthy monologue explaining the nuances of emojis that could’ve gone on for twice as long and still been just as a funny. ("Emojis are complicated... hourglass means that someone is hot, but not in the way that fire does.")

So let’s avoid the clown emoji, and dig into the hilarious highs and even more hilarious lows of "RIP Cynthia." 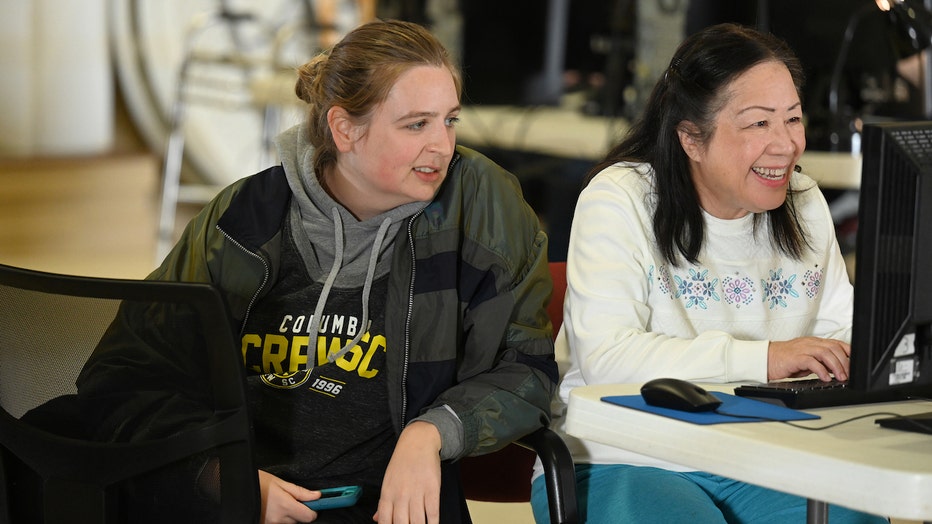 It’s all about tech this week, as Father Joe (Seann William Scott) enlists Shrub to volunteer at a local computer class for the elderly. It pays in free apple-grape juice. Add to that the allure of the church’s new super fast wifi package ("it’s like the unicorn of wifi!") and Shrub can’t resist. Even his cousin Kelly (Holmes) stops by to soak up some of those sweet, sweet download speeds.

While Kelly finds herself in a rivalry with June (Karen Huie) to see who can come up with the best town slogan for a contest with a $100 prize, Shrub has an even more unusual dilemma on his hands. It turns out grumpy local resident Len (William Tokarsky) has fallen for the oldest trick in the e-book: His new long-distance Estonian girlfriend Cynthia is actually a phishing scam trying to get him to wire $3,000 to a bank in Nigeria. ("Cynthia" is just a stock photo of Miss Estonia 2006. 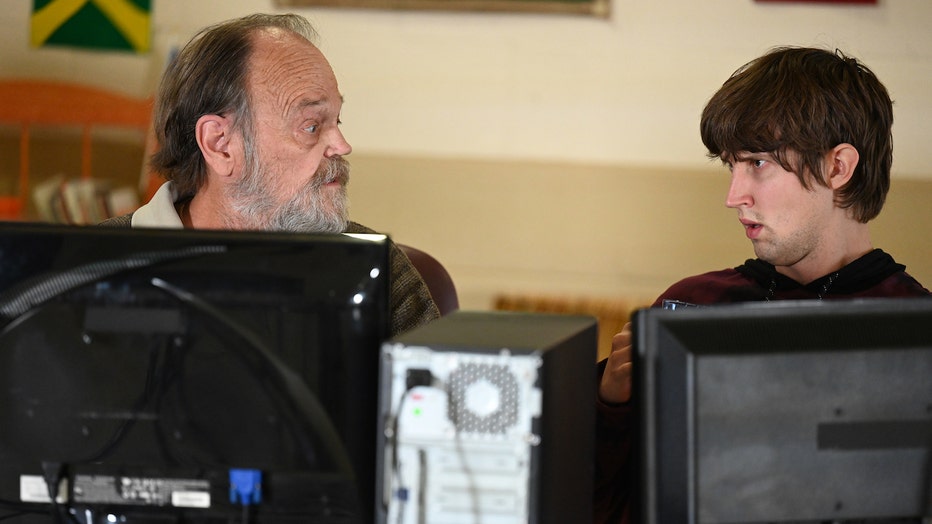 Shrub’s clearly in over his head here, so he holds Len off with a lie: You can’t wire money over the internet on Tuesdays.

The art of self defense

Elsewhere, things are a little tough for Cheryl (Aya Cash) this week. After being seen out and about with her new beau, "Pockton Gazette" editor Jimmy (Desmin Borges), she’s become something of a town pariah. Cheryl may think the famous rivalry between Flatch and Pockton is silly, but the residents of Flatch sure don’t. When they’re not throwing water balloons at her windows, they’re submitting town slogans like "Flatch: Home of Cheryl, unfortunately" and "If you love Pockton so much you should just move there. Cheryl." 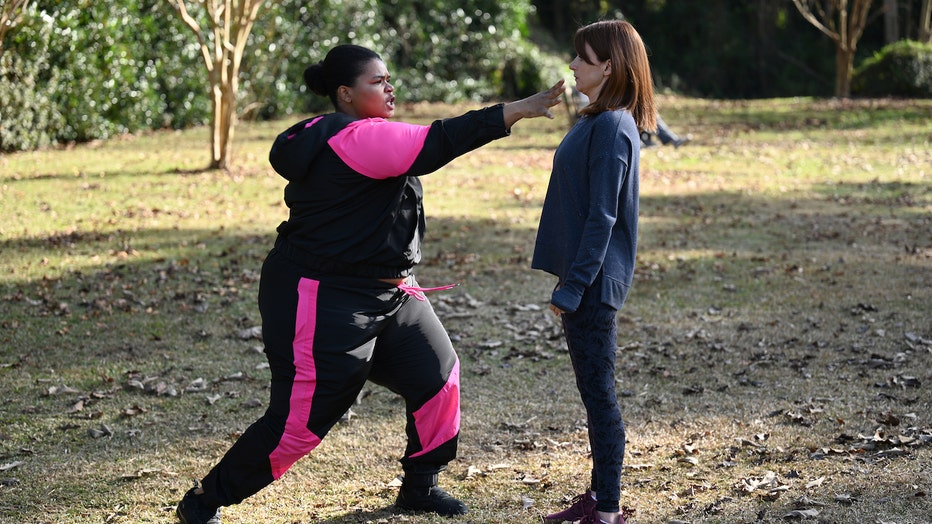 So it’s Mandy Matthews (Krystal Smith) to the rescue, as she offers to give Cheryl self-defense lessons. (Mandy trained to be in the Secret Service before she realized she wasn’t good at keeping secrets.) While Smith’s mostly been floating around the edges of "Welcome to Flatch" so far, pairing her with Cash unlocks a great comedic duo for the series. Mandy’s tough, straight-shooting demeanor is a perfect counterpoint for Cheryl’s mix of outward sweetness and inner intensity.

In fact, Mandy even (unintentionally) helps Cheryl unlock some of the sadness she’s been repressing about moving to Flatch with Joe only to get dumped by him. "I knew she would cry today," Mandy tells the camera. "I just didn’t realize it would be this soon."

Putting the "fun" in funeral 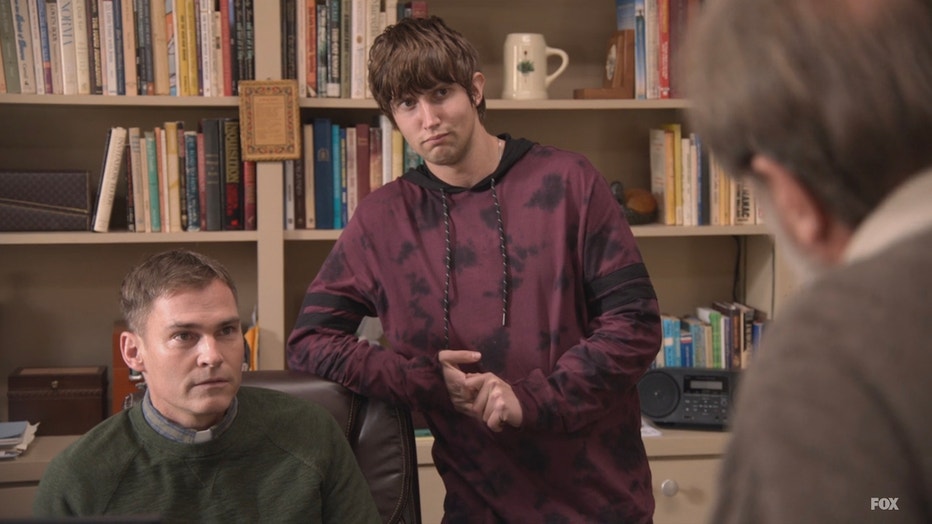 Speaking of Joe, he’s the one Shrub turns to for help with how to handle Len’s catfishing situation without breaking the old man’s heart. Their initial plan is to just tell him the truth. But when the moment comes, Shurb and Joe somehow find themselves falling into a deeper lie: Cynthia died... after drowning in a train accident just after passing her conductor’s test.

"All she had was me. How will she be remembered?" Len laments. "Probably as a woman who drove a train into a lake," Shrub replies, sympathetically.

Straley and Scott are very funny as Shrub and Joe keep spinning their lie into bigger, more preposterous levels. Soon enough, they’ve agreed to hold a funeral in Cynthia’s memory. And one trip to the party store later, the church is decked out in colorful decor.

"I believe that every living thing deserves a dignified death," Shrub explains. "Even if they’re made up." 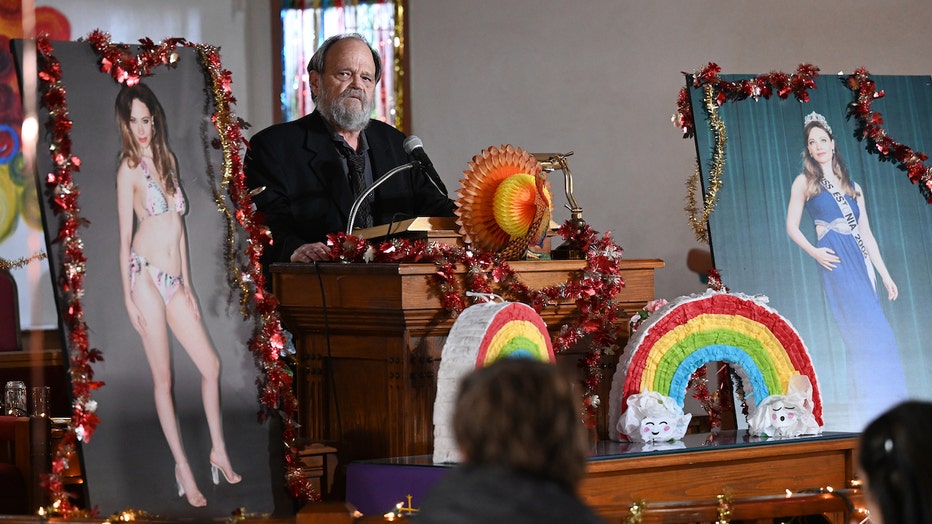 Cynthia’s surreal funeral becomes the big setpiece of the episode. (Though everyone but Len knows that Cynthia was just a scam, they’re happy to play along for the free cake.) It’s also where Cheryl’s story starts to dovetail with the main plot of "RIP Cynthia." Though Cheryl’s the only one in town not invited to the funeral, she decides to tag along as Mandy’s plus one. And after hearing Joe make a moving speech about the power of love (which seems to be aimed directly at her), Cheryl takes to the pulpit for her own proclamation.

It’s hard to be a "single woman of a certain age" trying to make it on her own, Cheryl explains. And whether you’re an Estonian model looking for love on the internet or a Flatch local dating someone from the next town over, you deserve to find connection where you can — even if it’s in Pockton. But that doesn’t mean she doesn’t love Flatch too, Cheryl reassures the crowd as she celebrates some of the town’s quirkier elements. "Because if you’re gonna uproot your life for love," she adds, "Flatch is so not the worst place to be."

Flatch: Not the worst place to be 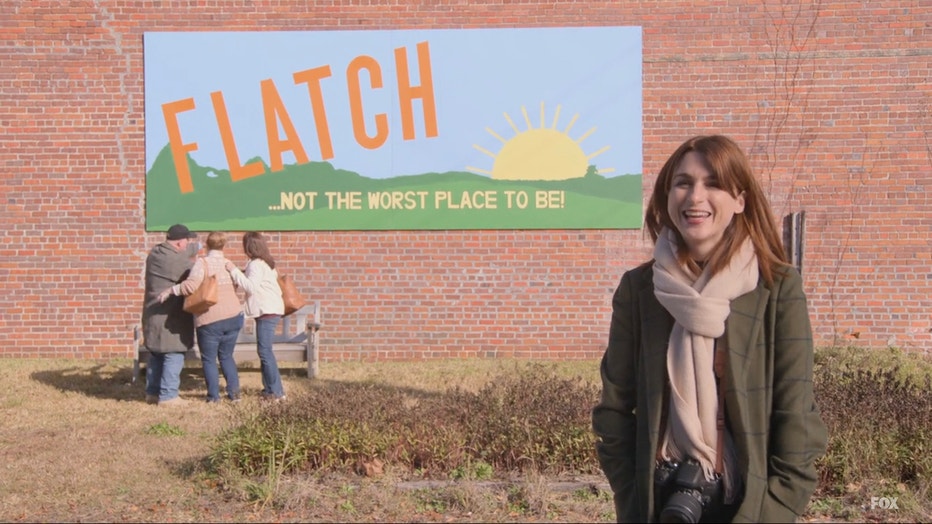 And what could be a better slogan than that? With "Flatch... not the worst place to be!" proudly displayed as the town’s new motto, Cheryl is re-embraced by the locals. (Kelly, meanwhile, is left with a box of t-shirts featuring her preferred slogan: "Full of Flatch-ulence.")

Then comes the episode’s kicker: It turns out Cynthia actually is real, and after arriving in Flatch she stops to ask Cheryl for directions. Unfortunately, Cheryl’s self-defense training kicks in at the worst possible time and lands Cynthia flat on her back. 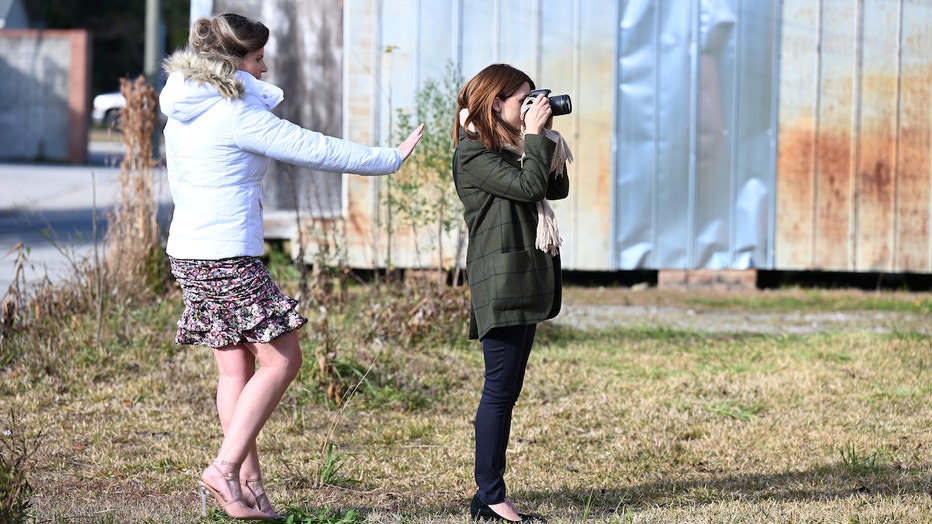 A terrified Cynthia bolts down the street as an excitably apologetic Cheryl tries to chase her down. But as the episode’s closing titles reveal, "Cynthia was never seen again. She is now considered a Flatch urban legend."

About a Boy (2002): Hugh Grant anchors the top-tier cast (including a young Nicholas Hoult of "The Great") of this Weitz Brothers gem, in which the grown-up love story is secondary to the transformative bond between a feckless bachelor and a bullied kid. Rated PG-13. 101 minutes. Dir: Chris Weitz, Paul Weitz. Featuring: Hugh Grant, Nicholas Hoult, Toni Collette, Rachel Weisz.