WASHINGTON - President Donald Trump on Thursday said he “figured there would be a chance” he’d become infected with COVID-19 and discussed an indoor reception for Gold Star families as an example of possible exposure. Meanwhile, the White House called the source of the outbreak an “unknowable question.”

The indoor event was held Sept. 27 at the White House for relatives of fallen soldiers, organized by the veterans group Greatest Generations Foundation. The organization said Thursday no Gold Star attendees have since tested positive for the virus.

In a Thursday interview on FOX Business, Trump described his schedule of public engagements as president amid the coronavirus pandemic and said he “figured there would be a chance” he would contract the novel coronavirus.

“And I went through like 35 people and everyone had a different story,” Trump said, explaining families who shared stories of loved ones they lost overseas.

In certain instances, they came “within an inch of my face,” he added.

“They want to hug me and they want to kiss me,” Trump continued. “And they do. And frankly, I’m not telling them to back up. I’m not doing it. But I did say it’s obviously dangerous.” 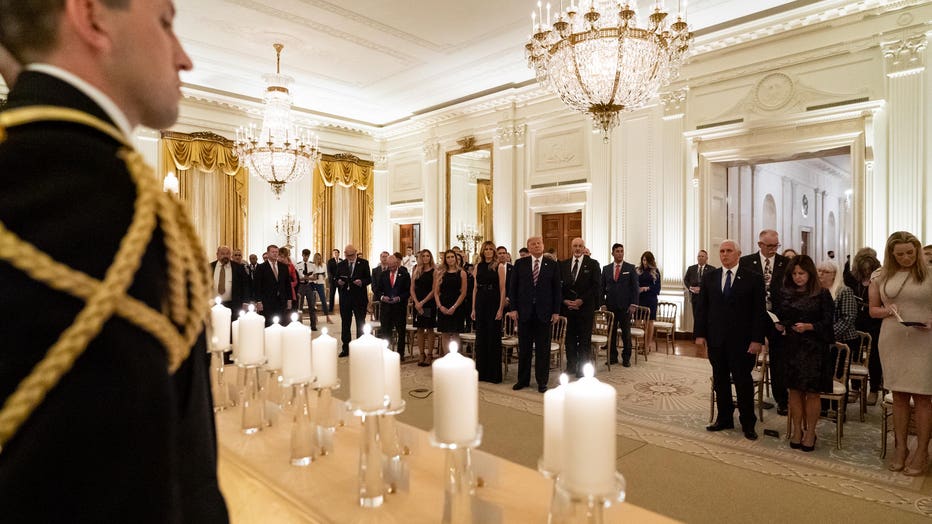 President Donald J. Trump and First Lady Melania Trump join guests in singing “America the Beautiful” during a reception in honor of Gold Star families on Sept. 27, 2020, in the East Room of the White House. (Official White House Photo by Andrea Hank

“As president, he has to continue running the country, and honoring Gold Star families is certainly a critical duty of the president,” said Brian Morgenstern, the White House deputy press secretary. “We don’t have any reason to believe there was infection or transmission at that event.”

Timothy Davis, president and CEO the Greatest Generations Foundation, said in an email Thursday that all Gold Star attendees tested negative for the virus beforehand. After learning of Trump’s COVID-19 diagnosis “late” on Oct. 1, Davis said the organization spoke to the White House early on Oct. 2 and all Gold Star attendees were notified later that morning.

Davis added Thursday that all were “doing well and exhibit no symptoms of COVID-19.”

“The Greatest GENERATIONS Foundation provides a daily update to the Office of Public Liaison at the White House on our nominee Gold Star Family attendees' health and wellness,” Davis said in a statement.

Guidelines from the Centers for Disease Control and Prevention state that large, indoor gatherings where it’s difficult to remain at least 6 feet apart and attendees travel from outside the local area carry the highest risk of spreading COVID-19.

Images from the indoor reception show mask-less attendees together in close proximity.

Morgenstern said there are certain “high priority events” held indoors at the White House such as this one, but precautions are taken — such as testing all attendees prior to the event.

“The public event schedule has been curtailed and limited as one of the COVID precautions, but there are certain events they’ll go through with — they just take safety precautions,” Morgenstern added.

On Thursday, the Washington, D.C., Department of Health released an open letter asking White House staff and anyone who attended the Sept. 26 event in the Rose Garden to take a COVID-19 test and contact their local health department for further guidance.

The letter, which was signed by nine other local health departments from neighboring jurisdictions, said there has been “limited contact tracing performed to date” by the White House medical team amid the ongoing virus outbreak.

According to guidance from the Centers for Disease Control and Prevention, contact tracing should be conducted for close contacts of confirmed or probable COVID-19 patients. A close contact is defined as any individual who was within 6 feet of an infected person for at least 15 minutes starting from 48 hours before the person began feeling sick until they began isolating.

The White House says this means an event such as the Gold Star families reception on Sept. 27 is well outside the CDC’s window for contact tracing, with the Trumps announcing early on Oct. 2 that they both had tested positive.

“Contact tracing is designed to mitigate further transmission of the disease,” Morgenstern said. “It is not an investigation into who was patient zero to introduce it into the environment here at the White House or anywhere else. It’s sort of an unknowable question.”