Drought has driven the Mississippi River to historic low levels, impacting the agricultural exports. The crisis has increased shipping prices, and that cost may fall on consumers and creating problems for barges.

The mighty Mississippi River has been hitting historically low water levels, and you may feel the effects even if you don't live near the vital waterway.

Deb Calhoun, the senior vice president of Waterways Council Inc., explained that the Mississippi and Ohio rivers are some key arteries of commerce for the U.S. regarding surface transportation and are vital to keeping American farmers moving.

"Now is the height of harvest," she said on FOX Weather Thursday morning. "So, moving all those agricultural products from Midwest farms and throughout the country to the Gulf (of Mexico) for export. Those global buyers are turning to the United States for those products, and they depend upon the most cost-effective way to move those bulk commodities, and that is by the inland waterway system."

It has been a decade since water levels in the Mississippi River have reached levels as low as they are now.

In fact, they're so low that saltwater from the Gulf of Mexico is rushing upstream to fill the gap.

According to the Lower Mississippi River Forecast Center, water levels are at or below the low-water threshold along a nearly 400-mile stretch of the river from near where the Ohio River meets the Mississippi River south to near Vicksburg, Mississippi.

Boats rest in mud at Riverside Park Marina in Martin Luther King Jr. Riverside Park along the Mississippi River on October 19, 2022 in Memphis, Tennessee. Lack of rain in the Ohio River Valley and along the Upper Mississippi has the Mississippi River south of the confluence of the Ohio River nearing record low levels which is wreaking havoc at marinas, and with barge traffic, driving up shipping prices and threatening crop exports and fertilizer shipments as the soybean and corn harvest gets into full swing. (Photo by Scott Olson/Getty Images)

"So, (the inland waterway system) is critically important for agriculture products, of course, also energy products to keep the lights and power on," Calhoun said. "It's important for our construction and building trades in terms of cement, moving steel and aggregate materials. We're also moving large cargoes on our inland system, such as wind turbine blades."

But with the Mississippi River experiencing low water levels, some cargo ships are getting stranded. So, what's the alternative?

"Well, unfortunately, we need mother nature to cooperate," Calhoun said, "We need her to dump about a month's worth of rain steadily over several days to make up for this deficit. The U.S. Army Corps of Engineers that maintains the inland waterways system has done a wonderful job of dredging."

But dredging takes time, and that's causing a backup of vessels waiting to transport goods.

And the extra time means it may hit many of us where it hurts – our wallets.

"Those consumer impacts are to be seen," Calhoun said. "If we don't get rain and commerce should cease on our waterways – as I said, it's still moving slowly – you could see higher prices for electricity. You could see impacts at the grocery store in terms of higher meat costs, or for building and construction materials." 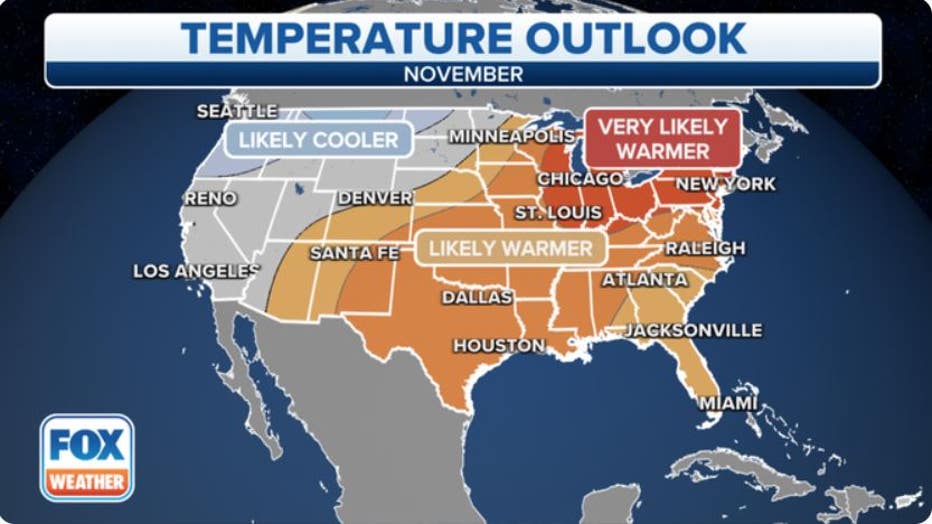 The National Oceanic and Atmospheric Administration's Climate Prediction Center released its outlook for November on Monday, and the outlook isn't ideal for people who are waiting patiently for cooler weather or more precipitation as we get closer to the holiday season.

According to NOAA, above-average temperatures are expected for a majority of the U.S. this November.

NOVEMBER PREDICTED TO SEE WARMER, DRIER CONDITIONS ACROSS MUCH OF THE COUNTRY

And while it's predicted to be warmer than average in many areas, the warmest temperatures relative to average are expected from the mid-Mississippi and Ohio valleys into the Northeast and New England. 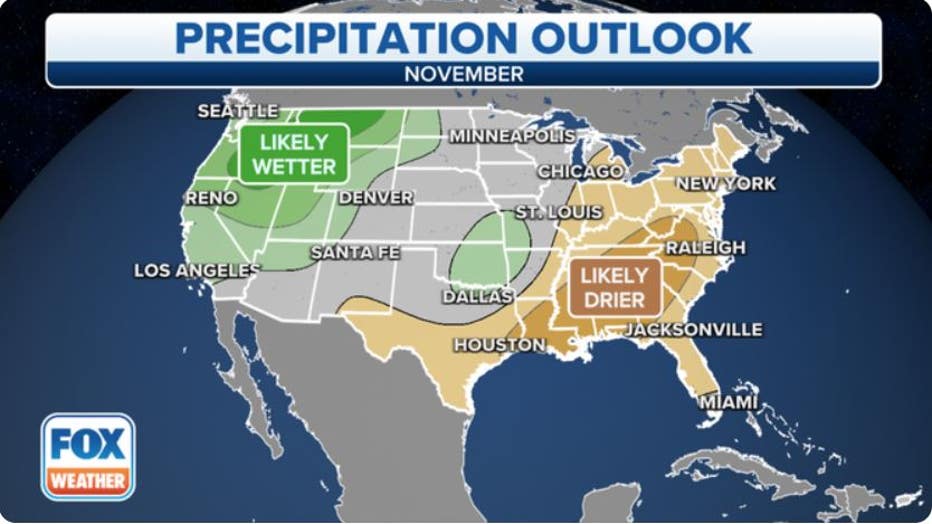 A majority of the country is also currently experiencing abnormally dry as well as drought conditions, according to the U.S. Drought Monitor.

NOAA's November outlook shows that while some areas could see wetter-than-average conditions, it will likely remain drier across the country's eastern half. This is especially true in some areas along the Gulf Coast, like Louisiana, Mississippi, and Alabama, stretching into the Tennessee Valley and parts of the mid-Atlantic.