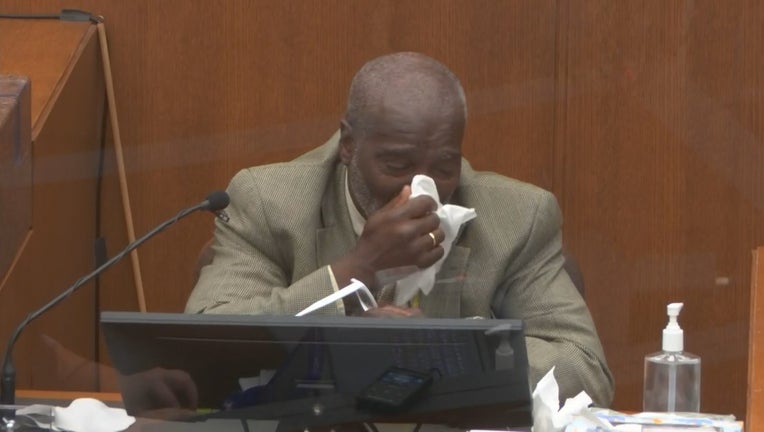 Charles McMillian, eyewitness to the Floyd arrest outside Cup Foods, broke down in tears during his testimony at the Derek Chauvin trial after watching video of Floyd's arrest.

MINNEAPOLIS (FOX 9) - A witness to George Floyd's deadly encounter with Minneapolis police broke down in tears on the stand during the trial of former officer Derek Chauvin.

Wednesday afternoon, Charles McMillian started to give his testimony of the incident on May 25, 2020. He told the court he pulled over his van when he saw the police vehicles at 38th and Chicago because he was "nosy."

Warning: This video contains graphic content and a traumatic experience. Viewer discretion advised. Witness Charles McMillian, who was at the scene of George Floyd's deadly arrest, reacts to body camera video showing officers trying to get Floyd into the squad car as Floyd pleads with officers.

Surveillance video shows McMillian saw much of the encounter, starting with Floyd being moved across the street, where the officers tried to put him in the police squad vehicle. As the officers struggled, McMillian said he tried calling out to Floyd.

Witness Charles McMillian says he told George Floyd 'you can't win' with police as Floyd was being arrested and that he was trying to make the situation easier.

In the video, McMillian can be heard saying, "You can't win." McMillian said by speaking to Floyd, he was trying to help make the situation easier.

"Because I have had interactions with officer myself and I understand once you get in the car, you can't win, you're done. It's just the way I've looked at it," McMillian explained in court.

In the video, the officers move Floyd to the ground where he states he can't breathe and starts calling out for his mother.

When the prosecution paused the video, McMillian became emotional on stand, grabbing tissues. The prosecution attempted to resume questioning, asking him about his strong emotional reaction.

"I feel helpless," he said, adding that he related to Floyd's calling for his mother.

Judge Peter Cahill decided the court would take a 10 minute break due to McMillian's emotional state.

When court resumed, McMillian continued his testimony, explaining he became concerned when he saw Chauvin's knee on Floyd's neck.

"[Floyd is] saying 'I can't breathe,' you know 'my stomach hurt,' you know he's saying things that make me believe he's in trouble," said McMillian.

"When you say in trouble, what do you mean by that?" asked Erin Eldridge, an attorney on the prosecution.

McMillan said he encountered Chauvin five days before Floyd’s arrest and had a brief conversation. During that conversation he reportedly said, "At the end of the day, we all go home to our families, and that he hopes he gets home to his family safe."

The court played video of McMillan’s interaction with Chauvin immediately after Floyd’s deadly arrest. The video was captured on body camera and a security camera.

In the video Chauvin can be heard saying, "We gotta control this guy because he's a sizable guy. Looks like he's probably on something."

The video captures McMillan's response, but the audio was difficult to understand due to background noise.

McMillan said he felt the need to talk to Chauvin because "what I watched was wrong."

The defense declined to question McMillan.

FOX 9 is streaming gavel to gavel coverage on fox9.com/live.